What would be the setup for an Armageddon Storm?

Considering the extreme parameters of yesterday and how little it in fact did produce, it made me think about what kind of setup that would create the worst tornadic storm ever. If we would stick within what would be (somewhat) reasonable but on the extreme side of it - what would have to occur to make this Perfect EF-6+ Storm? How would a scenario like that play out? What could cause extremely cold air aloft and bring up 75-80 dew points from the Gulf etc?

One ingredient outside of CAPE, dewpoints and shear I would imagine a super strong cap. Like an "unbreakable" cap that would only break for this one storm just due to the nature of the other extreme forcing parameters. Once broken it would overtake the entire region and swallow all other attempts of storms.

One attempt to look at it would be to look at some "single" superstorms like El Reno, Moore, Joplin etc. and what could have made those storms even stronger.

If you would be Thor (God of Thunder) and create this Perfect Storm. How would you direct the setup?

Hi Christoffer, you might want to check out this old thread concerning the actual, to date, worst tornado ever in the US -- the Tri State Tornado of 1925:

My local paper(The Southern Illinoisan) had an article this weekend commemorating the 85th anniversary of the Tri-State Tornado. A local family had a few "lost" photo's of the damage aftermath included with the article. The PAH-WFO has a good page summarizing the big points of the most...

Although detailed data regarding winds aloft, instability, etc. was not available in 1925 to the extent that it is today, there is just enough data out there to at least approximate what the setup might have been for that tornado.... spoiler alert: it was NOT necessarily the kind that screams "massive tornado outbreak" days in advance.
Reactions: William Spencer, JamesCaruso and Steve Miller

Elaine Spencer said:
Hi Christoffer, you might want to check out this old thread concerning the actual, to date, worst tornado ever in the US -- the Tri State Tornado of 1925:

My local paper(The Southern Illinoisan) had an article this weekend commemorating the 85th anniversary of the Tri-State Tornado. A local family had a few "lost" photo's of the damage aftermath included with the article. The PAH-WFO has a good page summarizing the big points of the most...

Although detailed data regarding winds aloft, instability, etc. was not available in 1925 to the extent that it is today, there is just enough data out there to at least approximate what the setup might have been for that tornado.... spoiler alert: it was NOT necessarily the kind that screams "massive tornado outbreak" days in advance.
Click to expand...

A nice reminder that a great chase does not require an outbreak! Makes me feel better as I start my trip on Thursday, having missed last Friday and Monday...

I too have wondered about about what would happen if nature lined everything up exactly right to create basically a Hollywood-style "perfect storm" for tornadoes.
Before finding this site I had no idea just how complex all the required parts just for building supercells was. (and I won't even pretend to understand allot of those graphs & stuff on the NWS/SPC are)

-------------
The linked Tri-state thread should prove an interesting read - especially the long article linked there. gonna take some time to read that.

Thanks, but I think you are missing my point a bit. Let's put it this way: Let's say you were the consultant for Stanley Kubrick who wanted to make a film ("The EF-6-ing") with the most intense tornado ever made and he wants it to be perfectly scientifically accurate. He literally wants to show the parameters and setups for this storm.

How would a storm like that play out? It doesn't necessarily have to be a tornado outbreak per se, more just one Big Storm. In fact, a tornado outbreak would probably decrease the likelihood of this Armageddon Storm as there would be less untouched air. Think Bennington/Chapman -16. It was not even in the "best" location for storms but it was by itself.

What synoptic scale events would proceed an event like this? What would prohibit the extreme parameters being launched to early or to cause a big mess? What synoptic scale setups would be needed to create this EXTREME CAPE and shear? Would we even want to have e.g. dew points at 80?

Thanks for the link to the Tri-State tornado, it is an interesting example together with El Reno. For example, were there limiting (non-perfect) factors that day that could have made the tornado even stronger/larger? What if there would have been a bit more moisture, added shear in combination with additional CIN? I read that the Tri-State tornado was on a low CAPE day, did that in fact enhance the tornado or would it have been stronger with high CAPE? I would assume so.

This is all just for fun and speculation but it would be interesting to speculate what would be a possible scenario for a new record breaking storm that is not just sci-fi.

The Jarrell, TX tornado back in 1997 was a kind of wacky one off event with the strange storm motions (NE to SW) and low shear/ high instability. Might could look into that as well as a starting off point.
Reactions: Mike Z

Thanks, but let's put it this way. What if there would be a synoptic scale event that would cause, let's say:

Could this happen? Would this even be the recipe for the Worst Storm in History?

I know Jarrel was a low shear/high instability day but would an increase in shear made the tornado stronger or weaker that day? Is there a linear correlation between higher (but still balanced) values and stronger severe weather?

I'm not sure there's really a correct answer, but this is an interesting thought experiment. I think one problem is that so many exceptional tornado events hinge on small-scale features that are sort of independent of the synoptic setup.

The environment on 3/18/25 probably wouldn't have screamed "historic weather event," but the Tri-State tornado formed essentially right at the triple point and, because of how rapidly the system progressed, it remained in virtually the same relative location for most of its duration. Would the tornado have been even more powerful if you'd cranked the CAPE up to 6,000 j/kg, or would junk convection have killed the event before it even started? (Side note - the environment on that day was actually pretty favorable further south into KY/TN, where several other violent tornadoes formed.)

Similarly, the 1947 Woodward tornado formed relatively near the triple point and rode a warm front that was lifting north at just the right time and with just the right orientation. There was better instability that day but still nothing exceptional. Would doubling or tripling the CAPE have made a difference? Would stronger shear at the synoptic level have done anything? Who knows?

The Jarrell tornado was even flukier, triggered by an improbable confluence of a cold front, dryline and gravity waves (among other things). Who knows if stronger shear would've allowed the tornado to become even more intense or disrupted the whole weird "zipper" propagation of the supercell southwestward along the boundary? I'd suspect the latter, but I dunno.

Even in extremely volatile environments, it's often the little things that make the difference. Arguably the two most exceptional tornadoes of the 4/27/11 outbreak were Smithville and Hackleburg-Phil Campbell. Both were influenced and enhanced by localized boundaries such that it might not have mattered much if the instability or shear or whatever were cranked up even further.

Anyhow, you might find this paper interesting if you haven't read it. The authors specifically look at the parameters that best distinguish violent tornado environments from other tornado environments. They found that low-level instability seems to be one of the biggest keys and that many other parameters don't really have that great an influence. That's not exactly an answer to your question, but it might hint at the most important place to start if you were building the perfect tornado environment.
Reactions: Andy Wehrle, Michael Norris, David Petri and 2 others

Look up soundings for Bangledesh tornado of 1989 (also look at 1996). It (1989) is the deadliest tornado in history (1300+ dead). I can't find the exact sounding, but Jonathan Finch has a great website on Bangladesh tornadoes. I believe there was close to 10,000 CAPE on that sounding and the supercell composite was well over 100 with dew points in the mid 80s. Dry line approaching from the west induced by terrain and an east to west outflow boundary. The location in respect to the Bay of Bangladesh's hot waters provide for an environment of extremely high moisture and instability. In addition to the poor infrastructure in the region, leads to devastating results.

Here is a general setup map from 1996, a different tornado event that killed over 600 (from Jonathan Finch website). 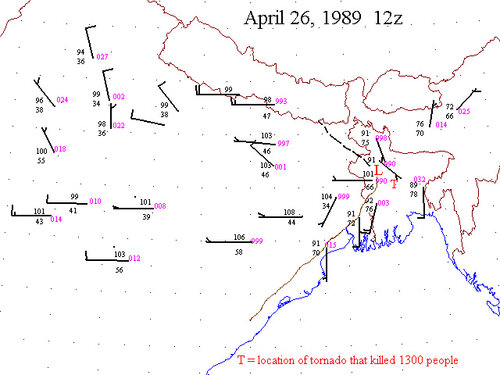 I wish I could find the table that showed all the parameters that were in place, but these maps give you a general idea of the volatile environment that sets up over that region.

Again, both of these maps are from Bangladesh and East India Tornado Prediction Site by Jonathan Finch.

If I find anymore maps from this, I'll try and post them. I did a paper for these on my Monsoon Asia class at WIU. Very interesting subject....

While I know this isn't in the US, this is about as close to a ridiculous setup you will get IMO. If you want a good example for the US, look at the 19z Omaha sounding from 2014-06-16 (Pilger, NE).
Reactions: Michael Norris and David Petri
You must log in or register to reply here.
Share:
Facebook Twitter Reddit Email Link
Top Bottom