What is this object in the sky??

Hey folks, this past Sunday afternoon (1/12/14) my oldest son ran in the house and asked me to come out and look at something unusual in the sky. When I walked out and first glanced up, my initial reaction was just a plane and contrails. After watching for a moment though, the trails were unlike the other contrails being left in the sky during the same time, and this object was moving more slowly as well. I ran back in the house and grabbed the dslr and a 100-400 telephoto lens, zoomed in as best I could and became even more baffled. I've included a widened shot and an enlarged crop of whatever this is. It persisted in the sky (or our view) for approximately 10 minutes as it moved on off to the southwest (this was in Marion, AR... just west of Memphis, TN). As it neared the horizon from our vantage point, the 'trails' had become very short but the main object itself was still rather bright/visible.

You can see some distinct characteristics with the enlarged shot, regarding the smoke/vapor/whatever, how it is coming from the outer edge and going under each side. There's a line/split or something on each side... and the middle is clearly curved inward to a point from each outer side.

What do you all think this is?? I've never seen anything like it. 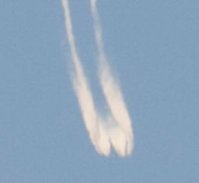 Darn, the uploaded images didn't maintain the image dimensions. Hopefully y'all can see those well enough though. I'm at work, but later I can provide a link to a better image this evening if anyone is interested.

Looks like a large airliner with 4 engines just cruising at high altitudes. Maybe an A380 or even military.

I haven't seen many, but I'm guessing it's a Xel'Naga cruiser: Thanks Marcus. I think the small images are making it difficult for it to be seen... I'll try to get a link to a larger version later today. I'm fairly certain it wasn't a "normal" air liner of any sort, as we were able to easily rule that out while watching it real time, and definitely later viewing the enlarged images.

I sent the images to local media and they had no answer either.

Thanks Rob... I'm still seriously wanting to find out what it might be, but I figured some wouldn't be able to resist adding silliness to the thread.

It's all good, sorry, my SDS is getting to me and apparently I'm starting to see UFOs in the sky!

It looks like a twin engine aircraft of some sort given the double, symmetrical contrails. A jet traveling far above normal cruise altitudes will produce different looking contrails and appear to be moving slower than aircraft below at lower altitudes. For example, there could be a private jet or military aircraft traveling at 40, 50 or even 60,000 feet while there is normal commercial jet traffic down at 20 to 30,000 feet. At those heights, it would be very difficult to see the actual aircraft making the contrails, especially if it's a smaller aircraft like a Cessna Citation or a fighter, while the temperature, pressure, and moisture differences at those heights are making the trails much more prominent looking.

Other objects that will leave trails include rockets and and meteors. Although since there are twin trails, I wouldn't suspect these.

My guess would be some twin-engine craft pushing very close to supersonic, causing vapor to build off the leading edges.

thanks for the feedback guys. I'm inclined to agree with twin engine suggestions due to the contrails alone... but its upon inspecting the visible part of the craft that leaves me scratching my head. No part of it resembles any type of plane I'm accustomed to seeing. I'm guessing the lower res .jpgs aren't doing it justice and the fact that I can pull up the raw images in PS makes a difference.

Certainly a reasonably large aircraft, either 2 or 4 engines - it may be the vapour trail from each wing's engines is being pulled together in the wake. The rather interesting pattern to the contrail behind the aircraft is known as 'Crow instability' - http://en.wikipedia.org/wiki/Crow_instability
You must log in or register to reply here.
Share:
Facebook Twitter Reddit Email Link
Top Bottom