I meant to post this thread last winter to help with the offseason boredom but I forgot so I am posting it now before I forget again. I managed to document what I believe one of the weakest tornadoes ever on July 8, 2020 in central Minnnesota. This was the same day as the Dalton/Ashby EF4 but after that tornado lifted. I can't remember if it was the same storm that produced the EF4 or a different one but either way, it wasn't far from where the violent tornado had just occurred. This one occurred near Vining, MN. The wall cloud was spinning pretty good and it seemed like another decent tornado was imminent. Unfortunately, the best it could muster up was a very weak, brief, partially condensed tornado before the wall cloud fell apart. See the video I have of it so you can see how pathetic it was. It got me thinking, what's the weakest tornado you've ever documented?
Reactions: James Gustina, Andrew Griffiths, Jordan A. and 2 others

August 8, 2021, near Coloma, WI. - A line of storms moved north/northeast and was severe warned. There had been weak rotation on radar, so I was going to punch through the line and get to the south to see what was up. Through the heavy rainfall, I could just make out whispy cloud curtains wrapped around to my south. That's when I noticed my phone's connection had lagged out. Driving south on I-39 into suddenly heavier rain, the wind picked up and was arcing up from the south and turning west, really pushing my car around. About this time, I noticed my ears were about to pop, which was the final clue that something was very wrong.

I don't recall a warning, but an EF1 tornado had touched down just off to the south. The tornado "lifted," and I have that in quotes because myself and several others mistakenly drove through the west side of a noticeable ground circulation as it moved north/northeast over the highway just south of a weigh station. The dashcam was able to pick out a couple cloud strands whisking across the highway before everything went quiet for a split second, and then the activity moved on past, pulling hard to the left as it moved on. If one would consider it a tornado, it would have to be one of the weakest. The official NWS track shows it lifted just to the south, so even though it wasn't officially a tornado at the point, I figured it could make the list, or at least be an interesting story. I felt ashamed to get into that position in the first place but was thankful to finish the day without further incident. Here's a link to the specific dashcam clip. Event is right at the 12 second mark. 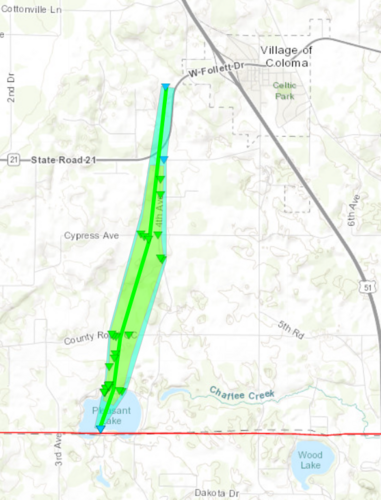 I've seen a lot of very brief and/or very weak tornadoes. I've driven through 4 of them (not intentionally). One was the May 21, 2011 Emporia/Reading KS tornado as it was just developing as I drove down I-35 into Emporia. The wind blew like hell one direction, then the other direction, and a few seconds later it was fully condensed to the ground.

Another happened during the June 4, 2015 Simla CO event when I drove through the just-developing anti-cyclonic tornado while watching the cyclonic one. June 16, 2010 I was parked on the western edge of the Dupree SD storm, unable to get into a good position on the storm (which produced a number of tornadoes that I missed) when I found myself in rotating debris. I looked straight up through my windshield at a rotating cone right above me. I left that spot. Quickly.
Reactions: James Gustina, Dean Baron and Jordan A.

Bob Schafer said:
June 16, 2010 I was parked on the western edge of the Dupree SD storm, unable to get into a good position on the storm (which produced a number of tornadoes that I missed) when I found myself in rotating debris. I looked straight up through my windshield at a rotating cone right above me. I left that spot. Quickly.
Click to expand...

A bit off topic from the point of the thread but that Dupree storm is quietly one of the most underrated storms I know of. A tornado machine that is not well known and is rarely talked about. Unfortunately I got on it too late and flooding made it impossible to navigate.
Reactions: Todd Lemery, Ethan Schisler and Bob Schafer 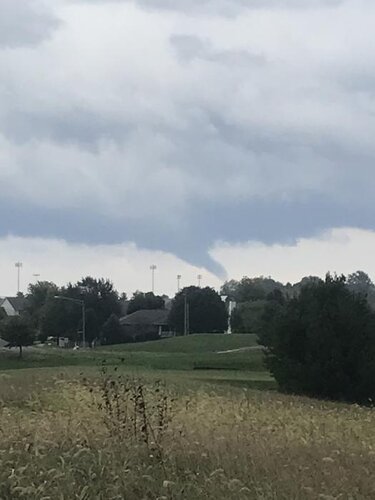 The weakest tornado I have ever seen was this EFU near Roanoke IL on 10/11/21 as this shortlived elephant trunk funnel did briefly touched. This was also part of my infamous bike chase where I saw a EF1 later on and then fractured my radial bone on the way home

Andrew Griffiths said:
View attachment 23422
The weakest tornado I have ever seen was this EFU near Roanoke IL as this shortlived elephant trunk funnel did briefly touched. This was also part of my infamous bike chase where I saw a EF1 later on and then fractured my radial bone on the way home

Wow! That does NOT sound like a fun way to end a chase!

Yea... I had to walk a little ways to get home too because I called for help but, no one was there. And then when I came home my parents weren't home so I waited for like 5-10 minutes.

Both of mine were in the Texas Panhandle oddly enough:

October 12, 2012 outside of Hale Center. Barely condensed into this broken, wispy rope and I think it did EF0 damage to an outbuilding or something of that nature in the 45 seconds it was on the ground.

March 13, 2021 bird fart just outside of Silverton while the Happy storm was going through Palo Duro way off to the north. Traversing into the canyonlands off the Llano on TX-256 put us behind the eight ball to have a chance to get a peek at the murky tornado that the same storm produced going into Clarendon. I don't even know if Lubbock ever located any damage/bothered surveying this one.
Reactions: Dean Baron and Todd Lemery
You must log in or register to reply here.
Share:
Facebook Twitter Reddit Email Link
Top Bottom