The sixth in a series of greater than M4 earthquakes struck offshore of Vancouver Island today (December 24) in an interesting sequence that began in the previous 30 hours (16z December 23). Five of the quakes have been greater than M5, with today's being the second exceeding M6.

The location of these quakes as well as the seismogram-derived moment tensors (fault plane solutions) show that these events have all been mostly "transform" (horizontal strike-slip, similar to the San Andreas) rather than on the main Cascadia subduction zone megathrust. As such, there has not been any tsunami threat to the region so far.

In the "beach ball" diagram showing the fault plane solution, a diagram with four equal quadrants would show pure horizontal strike-slip fault movement. The fault planes for these quakes have been very close to that, indicating some minor thrust (vertical) movement on each rupture as well. 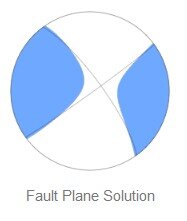 I also got alerts for this event. I've received several other worldwide alerts for quakes exceeding 6.0 over the last couple of days and commented about the activity tonight at a Christmas party attended by a few geologists who did not seem to take notice.

Interesting - it's always tempting to think that when an earthquake 'swarm' (or, mini-swarm!) occurs it might be the portent of something more sinister - I'm far from qualified enough to know whether the location of these even means this could be a possibility, or whether it's a somewhat more typical series for the region.

Yea, that's a nice cluster. These are all fairly small transform quakes that are unlikely to represent fore-shocks of a big subduction junction shaker. The Tohoku quake in Japan was preceded by two or three M6~7 foreshocks that were located on the same thrust fault as the main quake. (Not that all subduction quakes are so polite as to offer this sort of warning!)

It's those occasional swarms of small quakes along the Salton Sea that make me nervous. The southern San Andreas is truly 'overdue' and, AFAIK, research indicates that many past quakes initiated at the southern end, near the Salton Trough.
Reactions: Warren Faidley
You must log in or register to reply here.
Share:
Facebook Twitter Reddit Email Link
Top Bottom