This was released in late April, but it may have been overlooked due to the ongoing severe weather season. Oklahoma's earthquake risk was increased this year by the USGS to a 10% to 14% change of at least minor structural damage from ground shaking.

Notice that this map places Oklahoma's risk greater than California's, though a distinction needs to be made. California's year-to-year risk is lower because most of their events occur in very large, destructive earthquakes decades apart. California goes a long time in between damaging quakes, but when they happen, they tend to be large (magnitude 6 or greater). Oklahoma, on the other hand, is seeing multiple small but damaging (or potentially damaging) earthquakes each year. Oklahoma is unlikely to see a large earthquake of the sizes that California experiences, as there are no known faults that are long/tall enough to support one (magnitude is related to the total surface area of fault surface that ruptures).

To attempt to draw an analogy in tornado terms, it would be as if California tends to see the EF4 or EF5 equivalent of earthquakes (magnitude 7+) every 20-30 years while Oklahoma would see multiple EF1-EF2s (mostly less than magnitude 6) every year. Right now, Oklahoma is seeing more magnitude 4-5 quakes than California is. 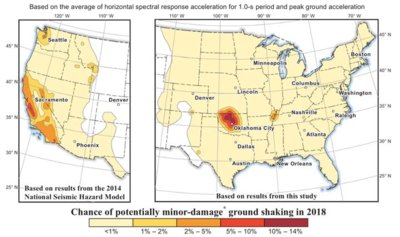 In my geology studies we are finding that the seismic activity in OK is likely due to waste water injections into the ground which is lubricating an inter plate fault line that extends all the way into Northern Nebraska.
You must log in or register to reply here.
Share:
Facebook Twitter Reddit Email Link
Top Bottom