Caught my first pics of upward lightning from my bedroom window last night. We had a nice storm move through and afterwards, the best lightning was on the backside of the bow that moved through town.
In Omaha, there is a group of tall radio towers that I've heard get struck fairly regularly. I've lived in my current house for 5 years and have never thought or taken the time to watch the towers during a storm. (Lazy I guess!) I live about 3 miles west of the towers.
I was heading to bed and there were a couple of loud booms so I looked out to the east from my upstairs bedroom to check out the lightning. As luck would have it, within 30 seconds the first CG hit one of the towers! I've never seen a tower strike this close and vivid that I can remember in all my years of chasing and storm watching.
I thought about getting my good camera out but the lightning was actually pretty infrequent. I waited for probably about 5 minutes and was ready to hop into bed, when BOOM there was another big strike on the next tower over!
At this point I decided to grab my iPhone and just use the lightning app I have on it. For those not familiar it snaps off 4 very fast pics when it detects the lightning.
I waited and waited again with my phone pointed at the towers. Just when I was ready to give up again, the biggest bolt yet happened! It happened so fast that I didn't even process what I saw until I saw the pictures on my phone that the app caught. The first 2 were upward branching lightning coming from a couple of the towers and then the last 2 it snapped were of the strike coming down from the clouds hitting the tower and this was so bright and big it blew out the picture almost completely unfortunately.
I stayed up just a bit longer but was happy with my catch so I went to bed. 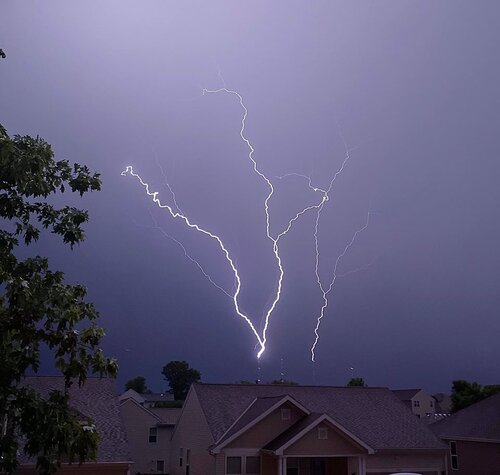 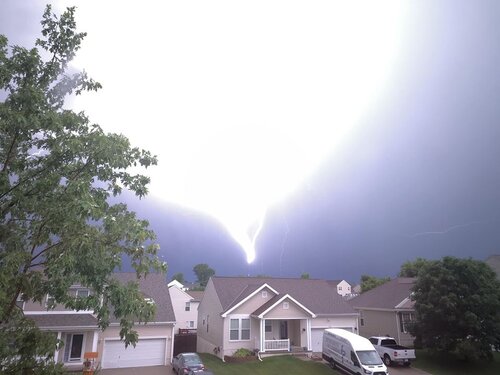