Sometimes it appears all the conditions are present for big tornadic supercells, and yet the potential goes unrealized, like a bomb that never goes off. Obviously a cap bust is a prime example. However I was looking at HRRR runs for tomorrow afternoon in northern IL (particularly northeast) and some of the values are downright scary. MLCAPE 3000, 0-1km SRH 250 - 300, 0-6km shear 50+, STP 5+. SPC only has the area in a slight risk with no sig severe probs, and tornado prob < 2%, and doesn't even mention the area in their discussion. Northwest flow setups are more common later in the season of course, but weather doesn't care what month it is, if the conditions are present...

One might think if storms initiate, they'd be powerful supercells with a risk for violent tornadoes. I'd love to hear others' thoughts on what's likely holding this region back tomorrow. Obviously it's not a textbook setup (located in the exit region of a powerful jet streak rounding the base of a negatively tilted trough with backed surface winds across a warm sector, etc.)

Maybe a lack of large scale ascent/upper level energy to aid the process? My working knowledge of synoptic scale meteorology hardly "works" at all

, so I'd love to hear input from more experienced forecasters if they have the time! 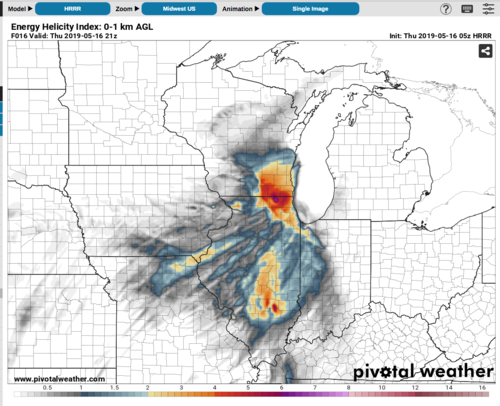 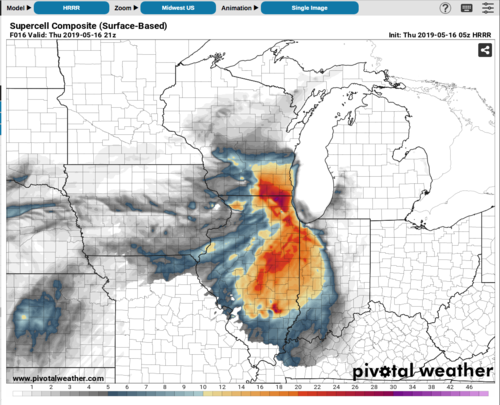 A few things stick out to me:
* The SE-advancing MCS over Wisconsin at this hour (11Z). Will be over area of concern by afternoon. 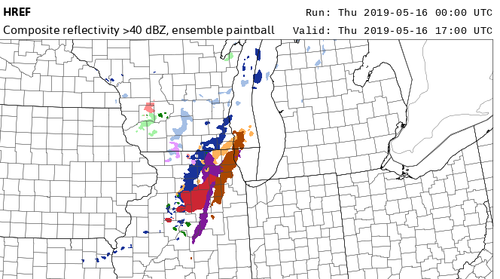 --- What will things be like post-passage? Residual cap left over? The models show very quick sfc-temp recovery, yielding those CAPE values.

* Absence of prominent SFC forcing till around dusk as a front moves south,

*What I'm NOT sure about: Absence of Shear above 3km 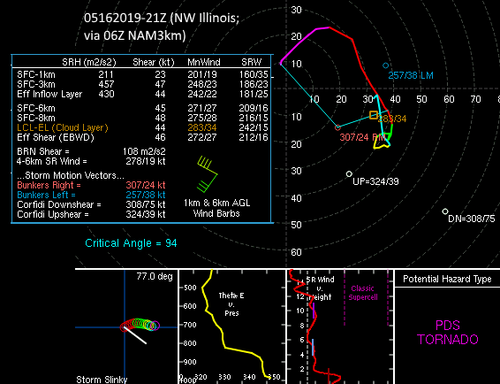 --- We know the importance of ample LL Shear (and its got it). I'm not familiar with the SR Winds vs Height effects (as you can see the graph doesn't meet the standards of a classic supercell) nor with the data on shear confinement. Maybe a water-loading issue negatively affecting updrafts?

* You're right about there being an absence of Mid/Upper forcing. No lows/troughs or favorable positioning of jet-streaks.

My takeaways: SFC-forcing scarce until dusk; forcing aloft minimal (essentially non-existant 500hPa and up); minimal forcing contribution aloft. Now If (as the HRRR is saying) the morning MCS over Wisconsin goes more ESE (let's say Michigan solution), I imagine So. Wisc and No Illinois could see temperatures max-out sooner than progged, with a potential outflow-boundary from the MCS set-up as a potential trigger for cells. This would be the most-favorable conditioning for supercells in this area, especially with the insane SRH (LL Shear), Strong CAPE, and very favorable Critical Angles.

I don't think SPC's outlook products were unreasonable for this setup. They did have the region mentioned at least as far back as day 3. Supercell Composite Parameter values of 10-20 don't necessarily guarantee massive severe weather. It looks like whether CI occurs has been questionable the whole time, so that level of uncertainty alone is probably sufficient to limit talking up this setup, even if it does have "potential" to result in some significantly severe storms. The front looks pretty weak to me, with essentially no temperature gradient and weak NW winds behind it compared to only 10ish kts out of the SW ahead of it.
Reactions: Dan Ross

Thanks for the responses! And for the record I don't think SPC is unreasonable at all, I'm just seeking to better understand the reasoning, and what factors were mitigating the probs they issued. They have a tough job - I'd probably be crying wolf all too often. I guess we'll see in the next few hours if a supercell or two can form.

Looks like tornado warned supercell headed down the IL/IN border right now, skirting the edge of CIN to the east. 80/65 with 10 kt S winds ahead of it. Wish I still lived in IL, what a fun to storm to chase!

Yeah, that storm has some favorable motion going on. There is disagreement between the low-level wind profiles between KILX and KIND and mesoanalysis, but the observed storm motion is far deviant to the Bunker's right motion vector, which is greatly increasing storm relative inflow (which is nearly streamwise). Good SWly surface inflow, too.
Reactions: Dan Ross

I don't trust indicies. Typically if one drills down all the constant pressure level progs, carefully analyzes surface forecasts, and knows the conceptual model, numerical weather prediction is pretty good. Holistic NWP will show yeah or nay most of the time.

Indicies, not so much. Hodos can also be mis-leading both directions. I want to look at the constant press level forecast charts myself.
Reactions: Michael Wilkinson and Dan Ross

In addition to kinematic/thermodynamic profiles, you want to assess both large and smaller scale forcing.

Many times, there is an impressive overlap of large instability/substantial shear, but if other factors aren't in place, storms could be messy or not initiate at all.

Large scale forcing is important, but sometimes you want to see weak forcing. Too much forcing can cause storms to erupt fast, sometimes before peak heating, effectively turning into a mess. If there's weak forcing, there will often be little to no convective initiation. If you can thread the needle enough so that just one or a small number of discrete storms fire, then those storms can rapidly become severe, assuming the environment will support storm longevity. For this reason, I often prefer weaker/subtle large-scale forcing for discrete supercells.

Another thing to look at, as mentioned above, is pressure falls. See how the surface winds are responding to pressure changes, frontal/outflow boundaries, etc. Sometimes early day convection can leave an outflow boundary, but take a look at the temperature gradient on both sides. If there is substantially cooler air on the cool side of a boundary, that can be a red flag. Ideally, you want a relatively modest change, so that storms can ride or even cross the boundary without immediately collapsing. This, of course, assumes that you have convective initiation.

I haven't really addressed this specific case all that well, but in the Midwest/Ohio Valley, setups for localized tornado outbreaks are often a bit different than you might expect in the Plains. It's not often that you get a high shear/high CAPE setup in Illinois or surrounding areas that gets fully "realized." It has happened, but in my experience, it's not common. I could point to several setups that led to a 10% tornado probabilities by SPC, but either storms struggled to develop or they did fire, but did not become intense or tornadic.

The 8/24/16 event is a good chase that was sneaky and substantially over-performed. As mentioned, large scale forcing was weak. There was an outflow boundary in place, but there was not a sharp temperature gradient around it. There was fairly good low-level moisture around the area with dew-points in the lower 70s. There was modest instability, but it was not an extreme CAPE setup, by any means. The other thing I look for is wind profiles. In this case, winds were S to SE near the surface, around the boundary, veering all the way to WNW at 500mb. That's a great wind profile. If wind profiles are very favorable, there is weak large scale forcing, a boundary is in place and low-level moisture is abundant, you don't need large CAPE profiles for tornadoes. The result was a bit of a "surprise" tornado outbreak, even though in hindsight, it wasn't all that surprising.

One final thing I'll mention is low-level flow. Even if winds are backed near the surface, if inflow winds are weak and surface convergence is nebulous, that does not bode well for severe thunderstorms, especially surface-based storms. I think for yesterday's case, as Jeff mentioned, low-level winds were relatively weak. Winds did increase later in the afternoon, though.
Reactions: Dan Ross

Thanks again for taking the time to write such informative responses. Save for that afternoon supercell initiating on the tail end of the ongoing MCS, storms couldn't go up on the stationary front in IL until after sundown. That supercell sustained itself well and remained pretty discreet, with the MCS moving more eastward as it deviated hard right.

Seems the amount of forcing you'd want is a bit of a "Goldilocks" problem. And yes great potential can certainly be ruined by storm mode issues, due to convection moving too parallel to a cold front for example. I'll continue trying to brush up my understanding of large scale ascent - mainly recognizing what represents too much/too little for a given setup. It'll be interesting to see if storm mode issues are a saving grace for the residents of OK tomorrow...

Stumbled upon this thread today and I know it's old, but thought I'd respond since I live in southern Wisconsin, southwest of Milwaukee, and also remember thinking this day had good potential in my area. It was a northwest flow day with relatively strong winds in the mid-levels, especially considering these types of events mainly occur past mid-June, and with a typical Upper Midwest surface setup; a weak low over N WI/ the UP, with a trough with weak surface convergence extending to the SW. The weak surface convergence and neutral height movement at 500mb was clearly not a supporting factor in this event. However, the morning MCS pretty much completely stabilized all of S WI and far northern IL (diurnal cu was barely even to form many hours after its passage), and left an OFB over IL/IA. This is where the storms ended up forming. In addition, the upper 60s dewpoints that were supposed to be present across the region were only (barely) found in a small region of moisture pooling immediately south of the OFB. Most areas had Td < 62-63F. This is also common with SW low-lvl flow events in the Upper Midwest. The higher dewpoints get mixed out in events like this (warm sector pretty far removed for the surface low in the Lake Superior vicinity), thus precluding a higher end severe threat. I actually did have a storm with small hail in the afternoon but that was about the only thing that formed in WI that afternoon. An once again, the weak surface convergence was also a big limiting factor until the LLJ could ramp up later. This is a pretty common fate of Upper Midwest events with weak surface features (weak surface convergence, early-day convection stabilization, and dewpoints getting mixed out).
Reactions: Andy Wehrle, Dan Ross and KPryor
You must log in or register to reply here.
Share:
Facebook Twitter Reddit Email Link
Top Bottom