EXCLUSIVE: Universal Pictures and Amblin Entertainment are meeting with directors hoping for a spring start on Twisters, a big-scale sequel to the 1996 storm-chasing blockbuster. Universal and Warn…

This will be interesting to see how much the graphics have changed from the original Twister.
Reactions: Mike Smith and James Hilger

I REALLY hope this is a solid movie, and isn’t being overhyped and turns out that it’s a flop.
Reactions: James Hilger and Chase K 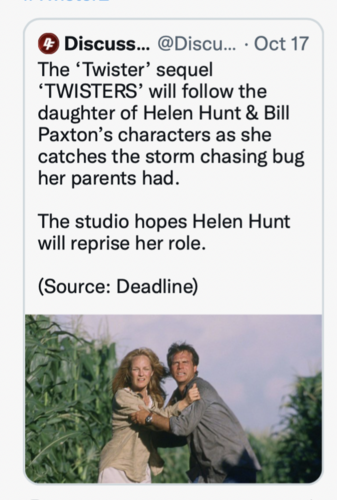 With Supercell getting announced, im not surprised this happened.

That last sentence scares me. I really hope they're not going with "the tornadoes are alive! Mother nature thinks!" We got just a hair of that with Twister when the F5 turned and started "chasing" Bill and Jo after they successfully deployed Dorothy, but it wasn't enough to be completely ridiculous. It's sadly realistic actually since I believe the 2013 El Reno tornado suddenly turned...
Reactions: Bryce Aufrecht and Mike Smith

Matthew Wann said:
That last sentence scares me. I really hope they're not going with "the tornadoes are alive! Mother nature thinks!" We got just a hair of that with Twister when the F5 turned and started "chasing" Bill and Jo after they successfully deployed Dorothy, but it wasn't enough to be completely ridiculous. It's sadly realistic actually since I believe the 2013 El Reno tornado suddenly turned...
Click to expand...

With how much Storm Chasing has evolved Event-wise over the last 20-30 years, it will be interesting to see what they will do with this plot. there are stories about a couple of "unrealistic" things that happened in twister actually DID happen to Chasers. im not going to list them off, but a couple of certain events pop up in my mind.

I posted this on another thread related to a Twister sequel, but I will repeat it here. If they want to get the tornadoes right they need to take a look at Leigh Orf's computer simulations and study close up high def videos of tornadoes. The movie "13 Minutes" right now has the most realistic CGI tornado/supercell to ever hit the big screen, but they kept it pretty simple, which worked well for that movie. "Twisters" will require a lot more action.

The CGI in the movie "Into the Storm" felt like a more refined version of the CGI tornadoes in the original Twister movie. While they were better, they still failed to look truly realistic. The real problem with "Into the Storm" was a dull plot and characters that were forgettable.

I am very curious to see how Bill and Dusty are written out of the sequel. Their absence will no doubt be glaring. It presents filmmakers with quite the challenge of connecting the sequel to the original. Typically this doesn't work very well, however if done right (Top Gun: Maverick) the results can be a sequel that not only lives up to expectations, but rivals the original. For "Twisters" to recapture the magic of the 1996 original, filmmakers have to be as true to the original as possible. They MUST get Hellen Hunt on board. Recasting Jo Harding will doom this movie. They need to bring back the original chase team and have a scene where Jo visits Aunt Meg in Wakita.

I am curious to see how they score this film. Mark Mancina scored the soundtrack for first film and did a marvelous job combining a touch of Americana with a catchy eerie undertone. Van Halen tied it all together with "Human's Being" and "Respect the Wind". Do they bring Mancina back to reprise the original score, or do they go in a different direction? I have seen some chasers suggest Hans Zimmer, and while his work is iconic and among the very best, I am not sure if his "style" fits Twister. I may be wrong on this, but he wouldn't be my go-to. Honestly, I like a darker undertone and would like to see someone like an Atticus Ross do the original score.
Reactions: JamesCaruso

Greg McLaughlin said:
I have seen some chasers suggest Hans Zimmer, and while his work is iconic and among the very best, I am not sure if his "style" fits Twister.
Click to expand...

Here's another online piece about the Twister sequel A sequel to ‘Twister’ is coming! Here’s what we know
Reactions: Dave Chapman and Jeff Duda

The original "Twister" in 1996 was blamed by the "veteran" storm chasers for bringing a whole new generation into the pursuit; the attitude was similar to surfers or fishermen finding that their secluded spots were suddenly overrun by newbies and yahoos... For awhile, anyone that started in 1996 or later was disparaged as a "post-Twister chaser." To this day, that line exists, with none of the original veterans (with the notable exception of @Warren Faidley ) active here on Stormtrack.

I happened to have started chasing, with a chase tour group, that same year, but the timing was entirely coincidental. I had been fascinated with weather since childhood, and seeing a tornado was on my bucket list. It was just a matter of being at a point in life, and having enough money, that I could actually take a two-week chase vacation. I had my tour booked before I was even aware the movie was coming out. It was fun to go see it right before my trip; our tour group operator sent us free "Twister" movie posters in the mail too.

Now here I am, a "veteran" of 26 years myself . I doubt the sequel will result in much of an influx of new chasers, certainly not at the level seen in the mid-1990s. Storm chasing is already much higher-profile now than it was in the mid-1990s, not only because of "Twister," but also as a result of the "Storm Chasers" Discovery Channel series, storm chasing crews on The Weather Channel, and the online / social media presence of live-streaming storm chasers...
Reactions: Dave Chapman and Mark Gressman Jr

JamesCaruso said:
with none of the original veterans (with the notable exception of @Warren Faidley ) active here on Stormtrack.
Click to expand...

I sat in OU's old, stinky Felger Hall that fateful night in March, 1972, when Dr. Joe Golden came to the OU Student Chapter of the AMS asking us to chase tornadoes to validate whether the two experimental Dopplers in central Oklahoma improved tornado detection. See photo from that year. It is of the OUN Doppler. The other was in Cimarron. My first paper on chasing is here: https://www.tandfonline.com/doi/abs/10.1080/00431672.1974.9931722

I have chased continuously since. My most recent tornado was April 29 (see photo) near Tampa, Kansas. I've submitted a paper on that unusual storm to a peer-reviewed journal.

So, if someone would like the perspective of an "original veteran" chaser, I would be happy to provide it. 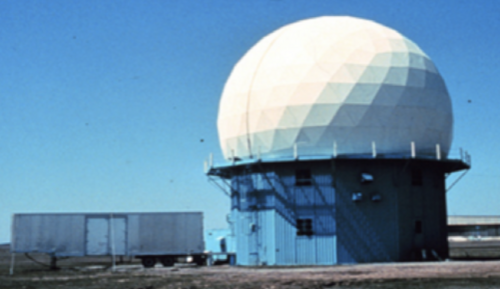 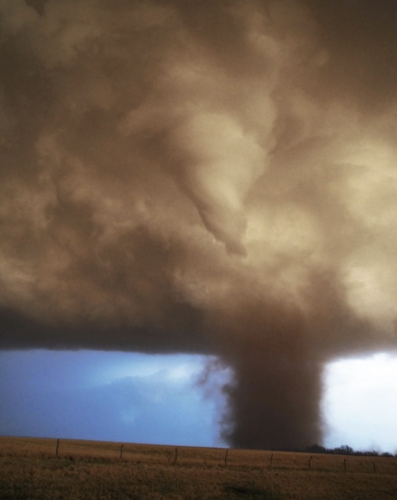 I personally don’t, but does anyone think this will cause an influx of new chasers?

I predict a bump but it'll fall off fast. Attention spans and long term dedication are in short supply these days.
Reactions: Jeff Duda, Ethan Schisler, Ken Perrin and 2 others

Mike Smith said:
However, whilst science has become complacent, mother nature has continued to evolve...
Click to expand...

This sounds like there's going to be some sort of MEGA TWISTER! Which would be horrible.

At least there's not gonna be a TIV rip-off flung thousands a feet into the air like Into the Storm...

A lot will depend on the writer and the eventual cast, including any notable actors. I cannot imagine a new Twister without some reference to Global Warming. This is especially true if a large studio is making the movie. When I was involved, there were multiple story ideas being considered. I doubt any of the original writers or producers will be involved, given how many years have passed since the original movie. With the original film, the story line I consulted on was tossed for M. Crichton's book. (He's 80 now). FYI, I liked the original script better.

I'm hoping a new film will be able to capture some of the modern lunacy and shenanigans, but it seems like a lot of recent productions use chasing contributors who purge reality and turn the lunacy into some kind of heroism or life-saving nonsense.
Reactions: Coy A. Wilhelmy, Dave Chapman, Bryce Aufrecht and 1 other person

As far as the new movie's impact on bringing a new wave of interest into storm chasing, I believe that hinges on how well the movie does upon it's release. In 1996, Warner Bros found lightning in a bottle when they released Twister. It was the second highest grossing movie of the year and became an instant cult classic.

Again, I go back to Top Gun: Maverick. It's the blueprint on how to do a long-awaited sequel that recaptures the magic of the original, and connects original fans with a whole new generation of fans. Movie makers must bridge the story in "twisters" back to the original, reprise all the roles of the remaining original cast and create a couple of memorable new characters who become fan favorites. They have to replace Bill and Dusty without making it seem like they are trying to replace them. Easier said than done, but great story writing and acting can make it happen.

If Warner Bros is able to recapture what they had in 1996 then I do believe the sequel will help influence a whole new generation of storm chasers, and will have a significant impact on the perception of storm chasing. If the movie is a flop, it won't have the same level of influence. My chase career began in 1997, just over one year after the original movie was released. What the movie did for me was present the concept of storm chasing as an exciting adventure that anyone could do. My interest in tornadoes and weather already existed, but "Twister" made storm chasing mainstream. I am hopeful that the sequel will rival the original, and movie makers will seize the opportunity to make "Twisters" the next long awaited blockbuster sequel.
Last edited by a moderator: Oct 30, 2022
Reactions: Dave Chapman, Todd Lemery, Mark Gressman Jr and 2 others

Im kind of worried about how the movie goes from a plot perspective. There was nothing really to build off of from the first film other than that warning system they were working to develop. Twister was never designed to have a sequel in the first place, as it was supposed to be a "one-off and done" kind of movie.
I 100% agree with bringing the original cast back. But something they should try doing is bringing in some Actual chasers from all fields into the film.
Then again, Spielberg was reported to have "flipped" after reading the plot, so its a maybe.

Matthew Wann said:
That last sentence scares me. I really hope they're not going with "the tornadoes are alive!It's sadly realistic actually since I believe the 2013 El Reno tornado suddenly turned...
Click to expand...

I think that adds to the horror. Having an older person talk about why her parents wanted her to be silent in storms, lest something hear. I want to see Tuscaloosa 2011 on steroids, vortices that almost seem to reach out.
Reactions: Coy A. Wilhelmy

I'll be looking forward to this one.

----
As far as storms not being photographically realistic in various movies...I don't think the 'general public' would ever notice.

The original Twister debuted in May. That might have been at least a small contributor to its success as tornadoes are top of mind during that month. I wonder if a July debut will have as much impact.