Sounds like the Navy announced that this was a Trident II (D5) missile test flight that was launched at sea off the southern California coast. This was seen from Flagstaff, Arizona. I think I saw a photo from as far east as Taos, New Mexico.

If I had known this was going to happen, I would have headed out to a better spot and started shooting earlier in the launch. These are amazing when they happen right after sunset looking toward the west or before sunset looking toward the east. The exhaust from the launch expands quickly once the vehicle rises above the dense, lower levels of the atmosphere. In this shot, a more concentrated stream of fuel/exhaust glows as a streak of blue-green while the missile itself continues to spew exhaust as a more white-ish fan toward the right side of the halo.

And link to a short time lapse. Sounds like it was multi-stage, so that explains the extra poofs and streaks as it moved northward.

Neat capture! I was driving up the Pacific Coast Highway on Saturday and returning inland towards my hotel along I-5 when I saw that in the sky. I was riding passenger seat since the rental wasn't in my name and was like "stooooppppppp rocket launch!"

I was near Morro Bay, so I assumed it was just a classified launch from Vandenburg AFB.

"stooooppppppp rocket launch!"
Hah, I can picture that! I was thinking kind of similar when I walked out the front door to grab some junk from the car. At first I thought, Man, light pollution is terrible tonight, why is it so bad?...and why is it glowing in an exact circle?...."ahhhhhh!! rocket launch!!" Pretty much an every-second-counts scenario of trying to yank camera bag and tripod out of the trunk, run out to the middle of the street, and set up without dropping and breaking everything.
You're probably already subscribed to this, Ben, but for anyone who isn't:
http://mailman.qth.net/mailman/listinfo/launch-alert
The link will let you sign up to receive email alerts of scheduled Vandenberg AFB launches. Sometimes it'll announce White Sands launches if there might be a twilight effect. Wouldn't have helped with a classified launch from a sub like this one was, but every long once-in-a-while seems like something visible from 300 miles away pans out.

I'm not subscribed, but that is pretty cool! I don't get to see rocket launches from either coast usually here in the dead center. But that would be the third launch I've seen - Saw STS-135 and EFT-1

I was on the USS Tennessee (SSBN-734) when we test fired a D5. Interesting experience. Nice capture!

@Ben Holcomb STS-135 — that was the last Shuttle launch right? Very cool. We caught STS-124 in 2008 and so glad we got to see Discovery go up before the program came to an end.

Another nice one went up this morning from Fort Wingate toward White Sands in New Mexico. I'm just chunking it in this thread to add to the set : ) 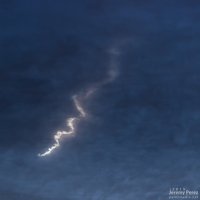