Great analysis written up on PhillyWX.com

One of the coolest questions left in meteorology with a frontier-like feel to it is, "why do tornadoes exist." Research in the last 20 years has applied field/case studies to figure out why some rather organized supercells under pristine conditions do not produce tornadoes and others do. In the l...

That's a good write-up and thread about the Greater Philadelphia area tornadoes (and farther into New Jersey). Lots of gradients of parameters over the area (both directions depending on parameter). Severe wx loves gradients!

As for warnings overall, I believe a couple shifts impact the POD. Recently the NWS seeks to reduce FAR. I don't agree with the goal if POD falls. We talk about warning fatigue, but getting hit without warning is worse. Public understands tornado warnings do not necessary mean, it's going to hit my house. Public takes shelter because it's developing and/or nearby.

Few years ago there was also talk about the less classic storm mode (on average) since the crazy 2011 year. We have more QLCS tornadoes and more non-supercell tornadoes. Classic outbreaks can be tragic, but textbook storms pad warning verification.

My own observation across industries is an over-reliance on quantitative analysis and software. Experience and pattern recognition absolutely matter! It's a law of science in business, quality goes up with experience. I have seen business demand forecasts degrade as experience retires. Layers of quant adjustments deliver a product that does not even match possible reality. No qualitative QC.

I'm not in the NWS so I cannot say that's what's happening. However Mike raises valid questions, his hypotheses regarding the issues are reasonable, and we should investigate the trends. Don't sacrifice POD for FAR.

Back to the Philly suburbs: Cell Mike referenced had modest rotation, but far from the radar site. With the hook echo, and funnel report, one could reasonably conclude better rotation at lower elevations. I would have advised a B2B client tornado at the same time. Plus if you believe in WOF, the parameters!
Reactions: Michael Towers and Mike Smith

I am sorry to report that there was another obvious tornado warning that was missed by the National Weather Service this afternoon. It was in southwest Wisconsin. Three meteorologists were tweeting about the tornado threat well before the warning.

If you would like to see the sequence of tweets: MSE Creative Consulting Blog: Another Too-Late #Tornado Warning http://mikesmithenterprisesblog.com/2021/08/another-too-late-tornado-warning.html?spref=tw…

The United States, for this and many good reasons, desperately needs a National Disaster Review Board. 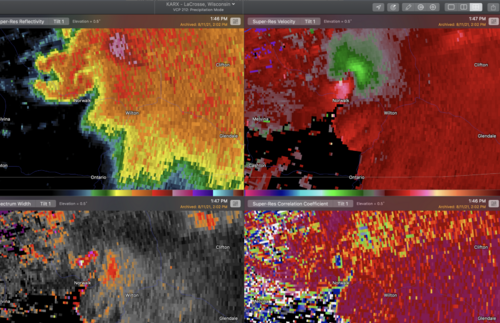 As I posted earlier, I was away during this oh-so-close-to-home event. I got back last Friday and had occasion on Monday evening to check out some of the damage at Washington Crossing park, which was hit by the New Hope PA to Ewing NJ tornado. I was roughly inside the area marked in the red circle below, which includes the main entrance into the park from Washington Crossing-Pennington Road. There were numerous large trees uprooted, and it was amazing to see the grass flattened in spots. I was trying to relate what I saw to the tornado’s plotted path and rotation, and it was not making sense to me.

I know the path as shown does not represent path width. But I assume it represents the center of the path. What didn’t make sense to me is that on the northern side of the plotted path, just north of the entrance road that you can faintly see on the map, I saw numerous uprooted trees pointing SE, indicating a NW wind (see crudely-drawn arrow). One would expect wind in the *opposite* direction in that location, unless the tornado was anti-cyclonic (if it was, that would have been unusual enough to have been mentioned somewhere, but I have seen nothing like that...) More confusing, I saw one tree that looked like it had been blown in the opposite direction (toward the NW) in the midst of all of that. And just one other blown over toward the NW just to the south of the entrance road, but then another blown toward the SE a little farther to the south of the entrance road. If I ignore the plotted path, I would expect trees blown to the SE to be in a southern quadrant of the tornado, and to the NW in a northern quadrant. If I had continued to walk further away from the entrance road to the NE, would I have seen trees blown in the opposite direction of the others, to the NW? Maybe, but that wouldn’t make sense relative to how the path was plotted, and anyway it seemed like the damage had stopped where I stopped walking. It was perplexing, and really bothered me that I couldn’t make sense out of it, but admittedly I am not a damage surveyor...

I attempted to go back for another look the following evening on my way home from work. The skies were darkening with storms developing, but I had no clear view of the sky on my drive. I arrived at the park, pulled into the lot, and checked radar before venturing out. It turns out a severe storm was bearing down on me, just four miles away. Is there no end to the cruel irony of weather, thwarting my attempts to survey the damage from a tornado right near my home that I missed because I was away?!?

Anyway, if anybody has any insight that can help me make sense of my observations I would appreciate it! 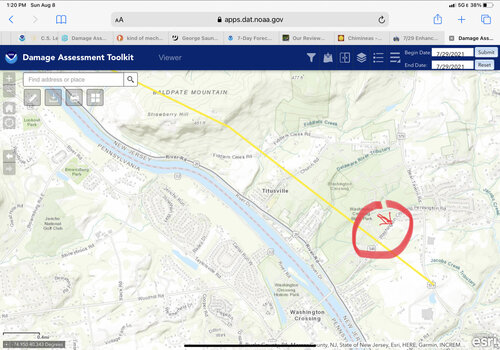 I've been looking for video of this tornado, and this is the only one I've seen so far. It appears to be multi-vortex.

That video was taken from a Buffalo Wild Wings in Quakertown looking south (maybe) ... probably not the one that hit Philadelphia. The last PNS I saw said they have confirmed 9 tornadoes (with possibly another one in the Pine Barrens in an inaccessible area, so, if they confirm it, it would be an EF-U ). There are some videos of some of the other ones, but, I have not seen really good structure video of the EF-3, which, may be what you are looking for
Reactions: JamesCaruso

This one has video from the Lowes in Bensalem (a half mile or less from where the EF-3 damage was noted in the survey) ...
https://www.facebook.com/LiveStormChaser/posts/3715628485330021
.
Reactions: JamesCaruso

This is a video from inside the auto service center that got hit (it was a very large building, with a large ection destroyed, so, this section was not at ground zero, luckily) ... Scene from inside Faulkner Auto Group service center as tornado hits .

This was the view from a toll booth for the PA turnpike ... https://cbsloc.al/3fe8alP . There as another one from folks driving which I am having trouble finding right now.

@Lou Ruh Thanks for those clarifications. I put some questions about the damage at Washington Crossing Park under the other thread, can you take a look? I know you participated in the damage surveys for the event, and even if you didn’t do that specific one you certainly have damage survey experience.

I went back to the Washington Crossing site again and found an additional area of uprooted trees. I am still confused because just about all the damage was north of the path as drawn, and the trees were lying in a SE direction, indicating a NW wind. This seems to imply either an anti-cyclonic tornado, OR the path was drawn incorrectly. I saw maybe one tree lying SW and only one lying in a northerly direction.

Appreciate any insight on what many have happened, or how my thinking might be incorrect….

On occasion, especially during significant outbreaks, damage surveys often get assistance from non-NWS personnel who do not have write access to the DAT tool (I used to before a security update removed my access). Detected DIs often don't make it into DAT (for many reasons) and a rough line is drawn in DAT (assuming it even makes it into DAT ... I am not sure if DAT usage is mandatory ... it at least used to be optional).

Another piece of the puzzle could be inferred from this excerpt of the PNS ...

THE
TORNADO PATH THEN CROSSED WASHINGTON CROSSING STATE PARK. FURTHER
DAMAGE WAS OBSERVED JUST SOUTHEAST ALONG BEAR TAVERN RD. IN FACT,
SOME OF THE LARGEST DOWNED TREES WERE OBSERVED IN THIS AREA.
HOWEVER, BY THIS POINT DAMAGE BECAME INCREASINGLY UNIDIRECTIONAL
AS THE STORM'S REAR FLANK DOWNDRAFT LIKELY WRAPPED AROUND THE
TORNADIC CIRCULATION. SUFFICIENT EVIDENCE OF TORNADIC WINDS STILL
EXISTED IN THE BEAR TAVERN RD AREA
Reactions: Ed Sweeney and JamesCaruso

I knew there was another one that I was trying to find ... if I have this one placed correctly, this is a bit north of the surveyed damage path ... but, the person driving appears to be driving south into the circulation (but, I could be confused) ... What's it like to drive in a tornado? Reader shares video of Bensalem storm .

Lou Ruh said:
I knew there was another one that I was trying to find ... if I have this one placed correctly, this is a bit north of the surveyed damage path ... but, the person driving appears to be driving south into the circulation (but, I could be confused) ... What's it like to drive in a tornado? Reader shares video of Bensalem storm .
Click to expand...

Too bad her camera was on the radio when she let out the loudest scream, would love to have seen what she was seeing at that moment

JamesCaruso said:
I went back to the Washington Crossing site again and found an additional area of uprooted trees. I am still confused because just about all the damage was north of the path as drawn, and the trees were lying in a SE direction, indicating a NW wind. This seems to imply either an anti-cyclonic tornado, OR the path was drawn incorrectly. I saw maybe one tree lying SW and only one lying in a northerly direction.

Appreciate any insight on what many have happened, or how my thinking might be incorrect….
Click to expand...

I'm not sure what your confusion is. The surface flow near a tornado is never purely tangential (i.e., circular). There is always a component of radial inflow (outflow in some dying tornadoes). If you're north of a cyclonic tornado, you're going to experience winds backing from some degree of NEly through N through NWly and probably to the W and eventually SW as the tornado passes you, if it is going SW-NE. If it is moving NW-SE, then you'll get NW winds persisting behind the tornado.
You must log in or register to reply here.
Share:
Facebook Twitter Reddit Email Link
Top Bottom