The first week in May is looking increasingly interesting with multiple day set-ups and forecast soundings hinting of at least one PDS set-up.
Reactions: Darin Scoggins, Justin McGinley, Bill Hark and 1 other person 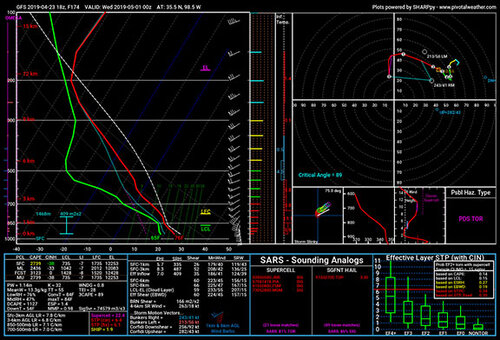 Agreed Warren! I was just looking at the 18Z GFS, and I'm quite impressed with central Plains chase opportunities for next week. There is decent potential from Monday and continuing for almost a week. Of course, the details are to be worked out and the model output will likely change. I cannot come out at this time, but good luck to those who can make it out.

The Euro is not quite on board yet with the multi-day fun, with the first wave sending a cold front to a Texarkana/San Antonio line. That being said, it does show at least one good day before that. If the aforementioned front can stall out and come back north quickly, we'll be in business. Cautiously optimistic for a chase trip!

It's still early. The Euro isn't overly excited about next week, but it's the end of April/beginning of May anyway. Climo says that the season is starting to ramp up, but it's fairly common to see more down days than big days in the first week of May. If you look at the past 10-15 years, most years have a lull in early May. It's not until at least mid-May that most years tend to start consistently performing. The year 2011 may be one of the best examples. That year was historically active in April, but then things shut down until the second half of May.

Overall, we've had a fairly quiet year so far in the Plains, but we're not that far off from climatology. Note that early season events in the Plains skew the averages, as big events in April are outliers. Dixie has had most of the tornadoes so far, as one would expect.

I can't think of too many years in recent memory in which the season started off busy (late April/early May) and stayed busy, aside from 2008. That almost happened again in 2009, but that year ended up being quieter than usual from mid-May through early June, which is the typical peak of the season. 2007 was very active to start May, but from May week 2 through the rest of the spring and summer, tornado counts were below average. 2013, 16 and 17 all heated up, but as you'll notice from tornado counts, their big increase wasn't until the middle of May.

Since Dodge City is one of the favorite spots for many chasers, here is their tornado climatology chart via SPC:

But hey, I get it. Even if the early season isn't very active, chasers expect at least a few Plains chases in April and early May. This year has delivered a few of those opportunities and should feature at least one or two more in the next 7-10 days.
Reactions: JamesCaruso, Jeff House and Andy Wehrle

Quincy post above is spot on. I'm rooting for a few people who had to go out there early. At the same time I believe the peak will be inline with mid-late May climo. If the current MJO wave passes through, we should be able to get another on its tail with falling AAM. Yes please!
Reactions: Quincy Vagell

Hold on everyone, fun times ahead! 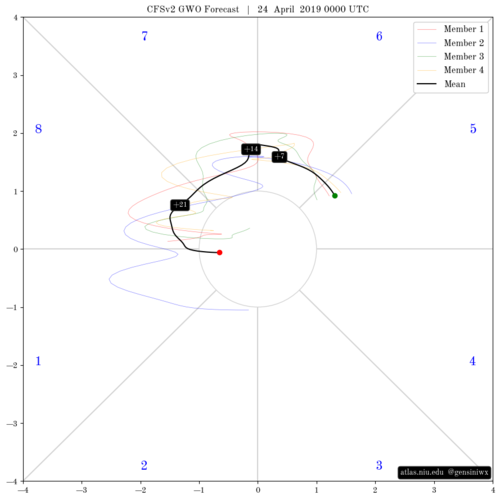 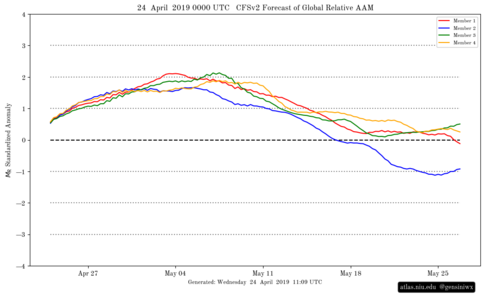 The optimistic view of the most recent posts is at odds with the ERTAF, which shows Below Average for next week. That forecast was from Sunday 4/21, have things changed that much since then, and if so isn’t it too soon to consider it a model trend?

JamesCaruso said:
The optimistic view of the most recent posts is at odds with the ERTAF, which shows Below Average for next week. That forecast was from Sunday 4/21, have things changed that much since then, and if so isn’t it too soon to consider it a model trend?
Click to expand...

Looking at the individual runs, the GFS definitely went to crap for this Sunday/Monday compared to multiple runs that were good up to a couple of days ago. Euro had 60s dews/high CAPE up into Kansas on Sunday, and that's been pushed south quite a bit on last night's run, which is more in line with the change the GFS showed. I've gone back to being pessimistic for at least the near term. Maybe it will end up being more towards mid May before it gets consistently better.

Charts above are in line with optimism starting around May 15, or May 12 at the earliest. No concerns for mid-late May vacations.

I wish all the best next week but I'll sit out. Could be decent local days, but fighting CF issues and trying to get dews west of I-35.
Reactions: JeremyS and Ethan Schisler

It's still out in fantasy land, but the GFS has been showing the PV currently just west of Greenland eventually retrograding towards Alaska by the 5th.

For several days now I have been looking at SW flow over the southern plains with forecast environment decent for supercells next week. That's about all it takes to get me excited for my first multi day trip of the year. It's just picking what days. May end up in TX each day. I have had some great times interacting with storms under weaker flow aloft.

Posted this on the StormTrack Forums Discord, but posting this here as well.

I won't re-post the graphic, but the last couple of CFS runs show most of May into early June as quite busy. We will see, but there are multiple indications of a busy May.

Sure, you can hope for a random mesoscale accident somewhere or the caprock pulling a rabbit out of its hat with upper 50s/low 60s dews but other than that. I don't think next week will be the dream tornado pattern we were once hoping for. Beyond that things still look to improve so Im overall optimistic, I just think we'll have to wait a little bit longer.
Reactions: Ethan Schisler and JeremyS

Every model run seems to get worse. Even the usually generous CFS isn’t showing much until the middle of May. I’m still holding out hope it will turn around as it so often does. I could be back to drooling on myself in a couple of days...

Weekly forecasts look good after May 10, esp after May 12. Really it's in line with the Quincy climo post above. I know people who had to chasecation early; so, I'm rooting for next week. However my main concern is late May.

AAM and MJO forecasts remain friendly to second half of May trips. Himawari loop shows West Pac stuff moving, which is good. Indian Ocean convection continues to build. Once we get that Pac stuff out of the way, maybe the IO can amp up the Northern Hem.

West Pac stubbornness may be part of the problem next week. However it's finally moving! ECMWF weeklies look good May 12-30. Little cool at times Plains, but it's way better than a ridge. There will be troughs. Tee it up!
Reactions: Adam Lucio, Warren Faidley, JeremyS and 2 others

Sure, you can hope for a random mesoscale accident somewhere or the caprock pulling a rabbit out of its hat with upper 50s/low 60s dews but other than that. I don't think next week will be the dream tornado pattern we were once hoping for. Beyond that things still look to improve so Im overall optimistic, I just think we'll have to wait a little bit longer.
Click to expand...

I agree. Will likely stay put until at least mid-May
Reactions: Stephen Sponsler and Jeff House

We will be flying to Denver May 8th and have 14 days net for chasing. SPC is now mentioning the possibility of zonal flow through next weekend. I hope we will see a return to western troughing by the time we arrive. By Thursday next week I might start to believe what GFS and ECMWF show for the time of our arrival.
Last edited: Apr 28, 2019
Reactions: Oliver G.

We also fly on may 8th to Dallas and have 15 Days for chase i think we will See a few good chase Days... After 10 May looks better!

Welcome to the Great Plains (last 2 posts). Week of May 6 might try 1-3 days. It's not great, including possible non-Plains, but it's not dead either. ECMWF is not as ugly as the GFS.

I believe sometime during the week of May 13 it'll perk up in the Plains. ERTAF talks mid-week, but nobody can time it. Awaiting the next favorable MJO signal. Weekly models also become slightly more favorable that period. Hopefully the ECMWF weeklies hold (22Z today/Mon).
Reactions: Devin Pitts and Oliver G.

I have a tour May 12-19th. Fingers crossed. At least now we finally have the instability to work with.

Still very impressed with the period of about May 12 onward, give or take a day or two. Don't really care about seeing insane troughs at this point, as once the dryline sets up in the west (as models have been consistent with) there is potential each day as small disturbances in the modest flow could generate isolated storms. Although it's still too early to start drooling, this could be a classic dryline year, given the pattern of fewer strong fronts driving the moisture south, only to return too late for the next system. Nor is there any indication of the evil 700mb cap hurling a money wrench into the party ATM.
Reactions: Paul Lemery, Ethan Schisler, Jeff House and 2 others

FYI, the MMM folks at NCAR have revived the NCAR ensemble for the HWT spring forecasting experiment, which will go on from now through the end of May. Forecast graphics at: NCAR Realtime Ensemble Forecasts