since this hasn't been started yet....take it away! From my limited understanding signs are much more positive than last year.
Reactions: Joseph Vitola Jr

I’m not smart enough to know if this year will be better, but I like the way you think!

Some of my best chase years have been El Nino years ... 2015 and 2016 for example I saw over 50 tornadoes with a couple big event days. I expect the impact to be very positive this year as well though those years had a STRONG El Nino.
Reactions: Joseph Vitola Jr

One thing I like this early out is our drought situation compared to the last few years at around this time. I feel quite a bit more optimistic than I did around this time last year that's for sure.

Of course the TX Panhandle will get storms, but I'm not so sure that we'll have a big tornado year. I'm thinking the biggest tor threat will be east of I-35 this year. We just haven't seen any moisture here (TX PANHANDLE) all winter. I think CO will see a nice season in late May through June.

Chase seasons since 1980 with at least weak El Niño:

Some good seasons in there, but a few really bad ones too.

Dan's very informative post sums it up succinctly - some good, some bad! Overall, my understanding is that La Nina years tend to favour more violent outbreaks, especially in the early season. El Nino less so. But I think when the overall tropical forcing is weak, then it's harder to make a really good analogue set. Sub-seasonal effects like the MJO will always tend to modulate what happens on a narrower part of the season (i.e. I'm thinking about those of us limited to a fixed 2-week period).
Some good papers out there about this stuff - e.g. https://journals.ametsoc.org/doi/10.1175/JAMC-D-16-0249.1

One observation i can make is that soils and aquifers in kansas are literally bursting with water, small creeks and runs that rarely or never flow consistently have had constant flow for months. We had a very wet late summer through now. I haven't seen this type of saturation, this time of year in the last 15 years. Take from that what you will. Less mixing? beter evapotranspiration? none of it matters though if the large scale jet stream pattern isn't favorable in the spring

CFS is very quiet ATM through March, although I'm not sure of the long term accuracy. The three month CPC outlook does not currently show any "below average" probabilities in the Plains. In other words, nothing negative pops out. I think we are still about a month away from seeing how the current pattern transitions, or at least a long-shot hint of things to come, like last year where the early lack of tornado activity did relate to a crummy season.

Hopefully, this looks like the last major arctic air intrusion onto the central and southern Great Plains for the near term. The GFS-FV3 is a little less nice with the upcoming pattern (it's also had a less than consistent winter thus far) but the standard GFS and Euro both point to a possible pattern shift with a more northerly trough path heading just past the 240 hour mark. I very much doubt we see any meaningful moisture return out of the Gulf this early in the year just judging by the multiple troughs moving through the south-central Great Plains in quick succession, but it's definitely a bit more heartening to see this early in the year as compared to the last 2 seasons.
Reactions: Jeff House 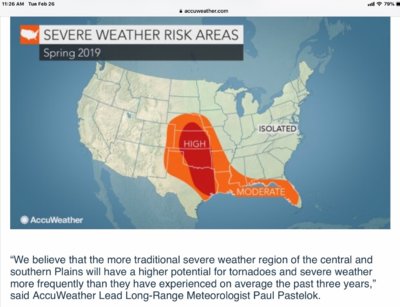 Accuweather posted this for what it’s worth.
Reactions: Olivia Campbell

LOL, that's the exact map I've drawn and many others accounting for a maturing dryline further east during a drought pattern.
Reactions: R Fritz and Jeff House 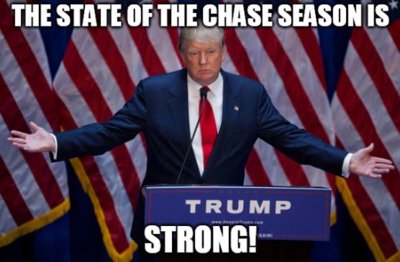 Seems to be another strong trough coming across the south on Saturday.
Reactions: Jeff House

James Wilson said:
Some of my best chase years have been El Nino years ... 2015 and 2016 for example I saw over 50 tornadoes with a couple big event days. I expect the impact to be very positive this year as well though those years had a STRONG El Nino.
Click to expand...

Already a big start of the year this past week.

I happened to see this posted today: https://www.nzpchasers.com/blog/dat...pD0yJ71D6fckTmkb5nlRJBV1qKnlSTxQ_TeXRyCmbJQ0s

Make of it what you will, but something add to the repertoire of speculation about the forthcoming spring.

Most of the rest of March seems to look empty, but there are some signs that at least the Gulf will open back up around the end of the month. 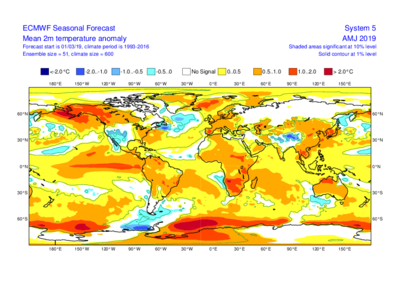 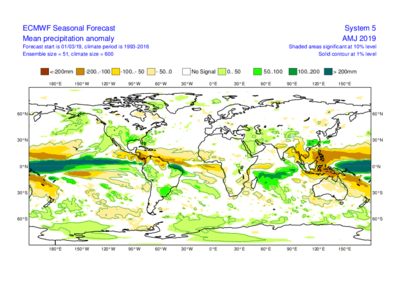 Here's the AMJ 2018 forecast and verification using the US Climate Division monthly composites (click the thumbnails for larger). 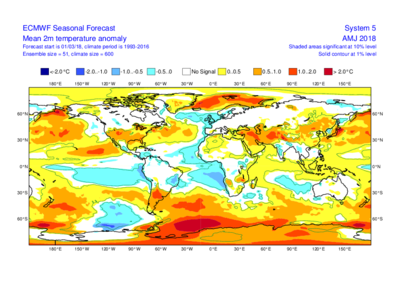 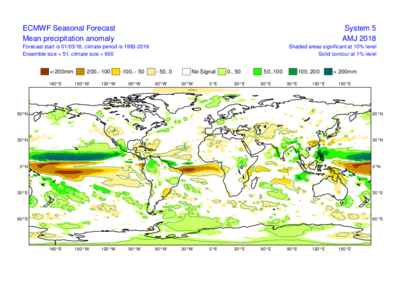 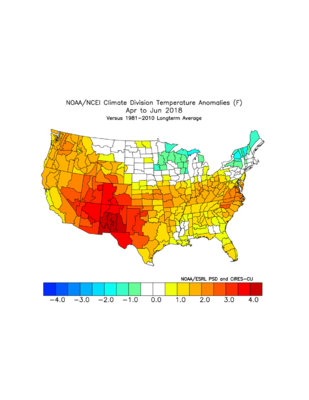 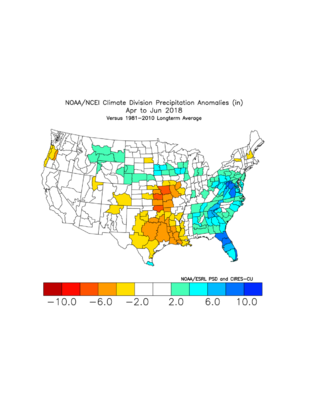 The CFS is still struggling with the next 30 days. I think the season is still in flux and could go either way. The latest ENSO forecast is showing weak El Niño conditions though summer, so you can add that to the equation. "Weak El Nino conditions are likely to continue through the Northern Hemisphere spring 2019 (~80% chance) and summer (~60% chance). The current event bears some similarities to the 2015 spring El Niño that went on to become a strong event by winter. However, it's too soon to tell whether this event will follow the same path."
Reactions: Jeff House

Looks like a brief window of opportunity may crop up towards the middle of next week but other than that, March is unsurprisingly looking dead for chase prospects. Hoping we start seeing those sweeping cold fronts from the north start washing out before reaching the Gulf with a little more frequency as we head into April.

I remain optimistic for the season despite a 7-10 day blah window. They happen often in March and even April. I do not believe this is one of those early hope, crash and burn seasons.

Winter pattern was active in the central Plains. Heartland got plenty of snow as low press cut through the Mid Mississippi Valley. Some weeks were northwest flow; but, many were southwest flow. When KC does well in snow, it did, places farther southwest can get active in spring.

Always a risk of a sharp pattern change, but more than half the time winter pattern cycles make it into spring. So we are in a down period now, like dry NW flow in winter. I expect it t come back around in April, even if delayed until after the first week of April.

Cooler than normal SSTs are noted off Baja and also off parts of the West Coast. Latter anomaly has faded last couple weeks, but may fluctuate with the ups and downs of the West Coast storm track. Makes the PDO hard to forecast. At any rate those regions cool with Atlantic SSTs warmer than normal favor southwest flow (all else equal). Last part is always the problem in meteorology, lol.

There is a risk the West Coast SSTs revert back (warm up) from this currently favorable state. Baja might have more holding power, which would help. Fighting El Nino is also a risk. However on the broadest scale, the Pacific basin SSTs have characteristics of both attm. Probably explains the lack of textbook EN behavior all winter. South had its rain. However the West had cold.

Bottom line: We want to see more of the West trough again. I believe it will happen and I don't mind waiting. If limited duration, better to do it closer to May than to waste it on fickle early April. Of course early and often would build more confidence.
Reactions: Todd Lemery and Andy Wehrle

I never want to see an active March. I can't think of too many seasons in the last 20 years featuring *both* an active March *and* an active May-June. I don't believe the synoptic scale pattern ever maintains itself long enough to be active from March all the way through June.

It's too early to speculate about the overall quality of the season. Surely by mid-April we will start to see how the early part of the main season will go.
Reactions: Jeff House and Adam R Davis

A big factor in the upcoming season is that eastern Nebraska is going to be essentially out of play despite any quality setups there. I know chasing is trivial compared to what those residents are going through.
Reactions: samuel stone

There is a reasonable amount of model support for an active sub-tropical jet this spring, with some other forms of guidance hinting at this too. This could result in a rather active pattern through this spring. Of course, given the last couple of years, even a moderately active one would seem 'active' by comparison!
Reactions: Jeff House and Todd Lemery
You must log in or register to reply here.
Share:
Facebook Twitter Reddit Email Link
Top Bottom