The Pilger tornado stole the show on this day, however the rapid intensification of the storm and the first two tornadoes SW of Stanton were fascinating to say the least.


Our team was just behind the storm when it began producing and we managed to stay relatively close even after encountering the damage path and a bad road choice. The occlusion of the first EF-4 could have easily been the highlight to any epic chase day, of course all the more incredible that the Pilger 1 & 2 hand off was under way.

Wanted to invite others to share media and stories from before Pilger. Honestly, I don't even know who helped me move that branch.
Reactions: Kevin R Burgess, joel ewing, Alex Heimberger and 4 others

My strategy was to wait for the storm to come to me on Highway 15, which is the N-S road through Pilger, so I filmed the Stanton tornado from well east of it. I also have the Pilger event posted. I never got around to posting them until almost a year later, and as a result they hardly have any views.

I haven't seen any other vids from south of Pilger, yet I know for a fact that there were other chasers there. (I'm linking only the Stanton vid here, but you can easily navigate to the Pilger one if interested.)

@Tony Laubach and @Brett Roberts also got very good footage of the Stanton tornado. I'll let them post on their own behalf, though. Hopefully they will post links to their videos. They're both on YouTube.

I was there for the beginning of the Stanton tornado and had a view of it for a while before it really strengthened and moved out of view. I came up through Stanton from the south and noticed the arcing powerlines near the last turn in town to head north. As I came out of Stanton, the rain/dust wrapped tornado came into view and it was pretty breathtaking to see. The occlusion was amazing. I eventually recorded the final ropeout of the tornado before heading on east towards the Pilger twins, which I ultimately was further behind than I would have liked, but still had a pretty good view of thanks the relatively flat landscape.
Here is my full video from the chase with the Stanton tornado at the beginning. Sorry for the shakiness! Was trying to do to many things at once while filming the Stanton tornado!
https://www.youtube.com/watch?v=jR2585tPH-o

Jeff Duda said:
@Tony Laubach and @Brett Roberts also got very good footage of the Stanton tornado. I'll let them post on their own behalf, though. Hopefully they will post links to their videos. They're both on YouTube.
Click to expand...

Here are some clips from my video that day, for those interested:


My "strategy" this day was not very sound, as is so often true of my solo tornado days. Had lunch in GRI to hedge between the dryline vs. possible warm sector storms with the early wave, but fortunately recognized the latter as the play early enough that I arrived on the SOTD in time. However, split-second positioning and approach decisions while chasing a tornadic supercell have always been a major weakness of mine, and that came into play here. I recall both the direction and speed of the Stanton storm frustrating me and leading to poor choices; ultimately I ended up way too far east, having expecting a slower and more ENE motion than observed (this started a domino effect of frustration that continued with the Pilger tornadoes). At the beginning of the YouTube video, I'm probably 7-8 mi. ESE of the tornado at tornadogenesis. Afterwards, I had to slog through the town of Stanton to intercept the EF4, completely losing view of the tornado cyclone and costing an extra 2-4 minutes of prime wedge goodness.

Of course, it was still an awe-inspiring sight once I finally caught up around US-275. With a bit less rain-wrapping, it perhaps would've rivaled Bowdle in photographic quality, even if for a shorter duration. The incredibly "dirty" rain curtains violently wrapping around and shrouding the tornado cyclone as it crossed US-275 gave it a very unique look. At that point, it was impossible (for me anyway) to tell the size or shape of the tornado itself. As the heaviest precip finally wrapped more E and NE of the vortex, one of my favorite ropes I've seen was revealed; I only wish it had lasted longer for me to get out the tripod and capture higher-quality images. This shot is looking NNW from US-275 just a hair east of the intersection with NE-57.

Agreed that the twins seem to overshadow the initial tornado.

I started the day in Omaha, as I had drifted east with some of the early-day junkvection. I made it to Stanton in time and almost core-punched, but decided to watch the storm from about a mile to the east. It's not the most compelling vantage point in terms of proximity, but you can see the rotating wall cloud eventually drop the tornado.

I had to drive through town and lost view for a while (trees and traffic), but witnessed the messy rain/debris wrapped storm before it started roping out.

I had uploaded the following image to Twitter right after the event. You can see the first tornado (originated in Stanton) starting to rope out on the left (1). To the right, the first Pilger tornado is in progress and the second one is about to touch down. There's a notch to the far right, which at the time of the post I had labeled "3.5," but I can't say I've done enough research to determine if that was associated with the fourth area tornado, or not.

Not sure how I stumbled upon this thread. Here's some video before the main Stanton tornado, this one touched down well south of there.

I was also on the Stanton tornado ... I know this post is late, but here are the pictures... 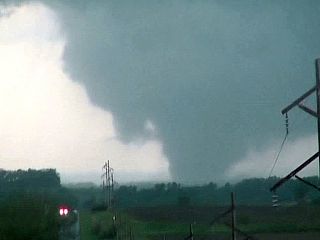 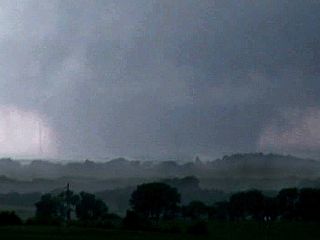 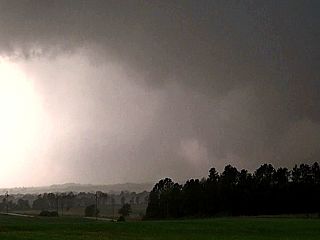 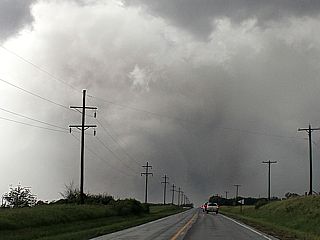 Above: Stanton, NE tornado still barely visible with debris and hail wrap. At this time, a new meso is producing tornado to the east (Pilger). 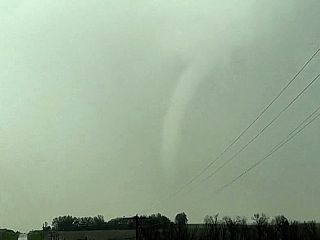 Above: View of the Stanton, NE tornado roping out from elephant trunk north of Highway 275.

Several years late, but I found a memory card containing additional stills I didn't realize I took of this particular tornado or ever processed. On any given day, this would have easily been the highlight, but this day was far from ordinary as most of us know, here is a few of the life cycle that I captured and consider to be of rather high quality given the fast pace of the day: 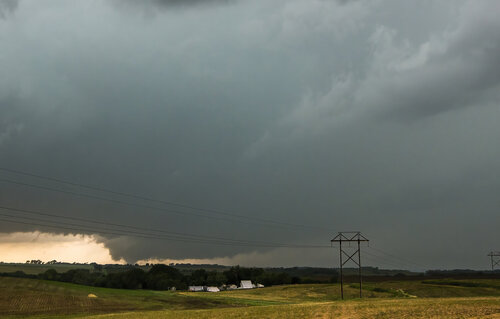 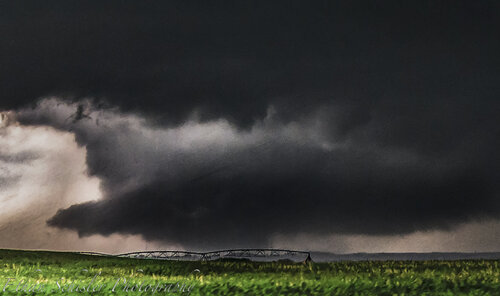 Tornado quickly grew into a wedge tornado with a loud roar as it passed just to my SW. 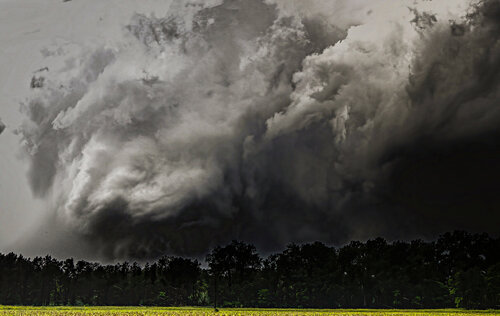 RFD wrapping completely around the tornado on the W side of Stanton, Nebraska. Check out that RFD cut above it though. Wow! 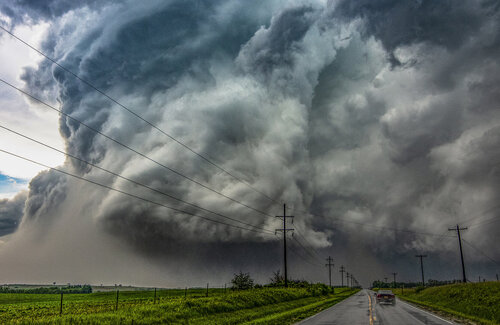 Heading N out of Stanton, NE on the main highway with insane RFD occlusion. 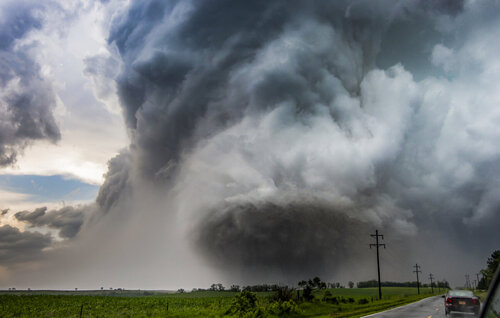 Tornado becomes more visible as I approach more to the north and get closer..Tornado is more visible and the RFD has almost completely wrapped around the tornado cyclone 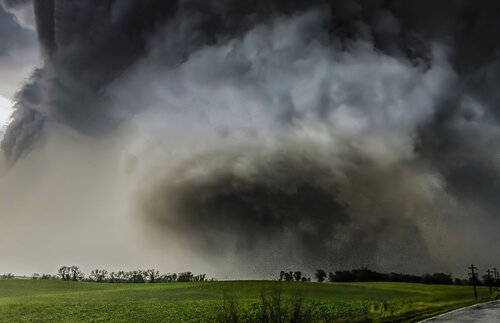 Very close now, the roar of this beast was incredible.... 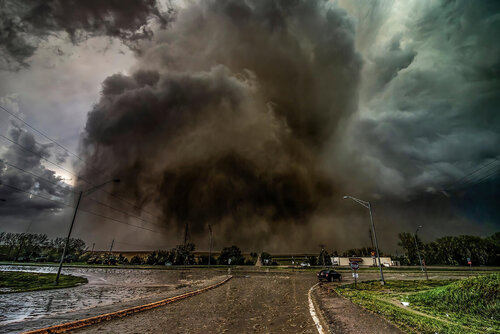 Highway 57 and 275 intersection with debris in the roadway and an EF-4 tornado ongoing in the background. Shot at 14mm on a Nikon D610 with a 14-24mm lens. The amount of dust and debris this thing picked up was nuts, you can still make out a wedge tornado ahead of me and the sound was incredibly defeaning to listen to. 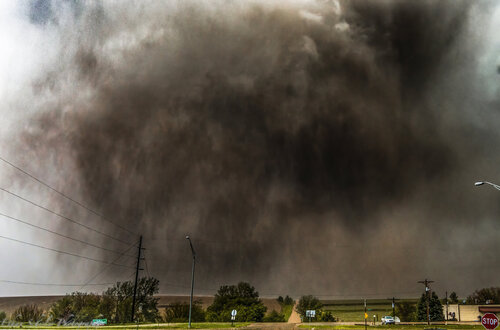 Close range violent tornado at highway 57 and 275 in Northeast Nebraska (Stanton County). Bit more of a zoom, but still very close. Again the sound here is something I'll never forget. IMO this is one of the most violent tornadoes that storm produced. 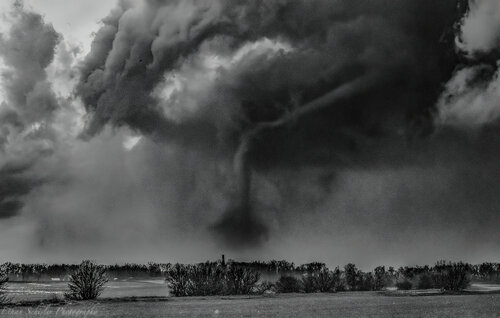 Tornado now a stovepipe beginning to rope out. According to NWS damage surveys, it was doing EF-4 damage around this time N of highway 275. One of the best rope out stages I've seen. 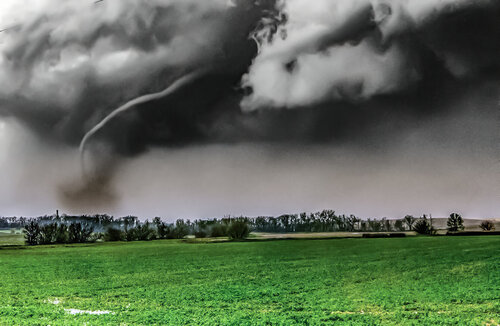