Figured it was time to start a discussion thread for the 2021 monsoon. I know there are more and more chasers heading to NM and AZ for the season, including dust storm events which are likely just a few weeks away.

Models (GFS and ECMWF) are trying to bring in precipitable water by late next week and the typical, pre-season blast furnace is torching the desert with temps exceeding 110F by the weekend.
Reactions: Jason Boggs and Jeremy Perez

Main thing I'm wondering is whether or not this year's monsoon will be a dud like last year.
I know the last drought outlook I saw showed drought-conditions continuing right on through the end of September. for a large part of the country. which isn't a good sign. (though I did notice the eastern half of CO is not included, so maybe we'll get some more normal rain here?)
Is there any sort of long-term forecast/outlook that specifically looks at the monsoon?

UPDATE: SE. AZ. Lots of needed rainfall during the early season, but lightning has been C-. Fire season risks have been greatly reduced. Amazingly, no major haboob has occurred between PHX and TUS. Can't remember a recent year where this has occurred. Steering currents have been moving storms in bogus directions, mostly from the N/NE. Not good for consolidating W/NW outflows into the lower deserts. There is still some potential for a haboob, given the famous, dust bed of insanity between TUS and PHX, is still bone dry. Once it rains, surface vegetation and a sun-baked mud cap really stabilizes the dust. I'll likely go out and take a peek this weekend. Looks like some potential for next week, as surface drying accelerates and favorable instability / storm movement is expected. 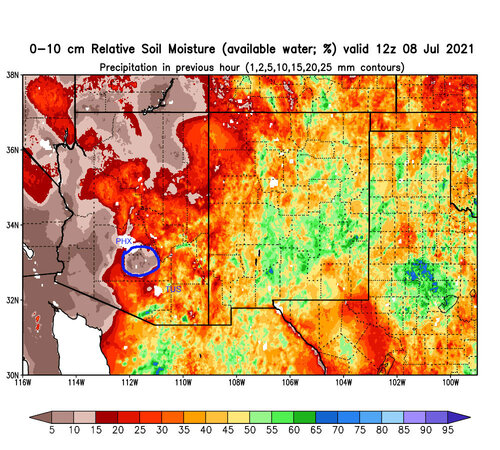 It seems like more chasers have jumped on monsoon chasing this year than in previous years. I am seeing a lot of photos coming out of Arizona over the past couple of weeks with a plethora of incredible shots of lightning over the Grand Canyon. Wish I could make it out there.

Chasers have picked a great year to pursue the monsoon. The lack of westerlies, record PWAT values and a train of disturbances in the eastern / southern flow are contributing to one of the best monsoons ever. Tucson is about an inch away from the wettest July on record. Ironically, we never had the mega-haboob this season, not so much because of the rain, but upper-level flow moved storms in unfavorable directions -- or no direction. Parts of SE Arizona look like a jungle from the rain -- with anacondas and spider monkeys to arrive shortly.
Reactions: Jeff House, JeremyS, GPhillips and 1 other person

As others have noted, the monsoon has been much more active this year than last year, although it is in a bit of a lull now (soon to return, though). I have posted some observations, pictures, and a video from around the Pagosa Springs area in the latter part of July; you can access that Web page at www.johnefarley.com/July21_monsoon.htm
Reactions: JamesCaruso

Went camping last weekend, and I must say...
Up in the mountains its pretty amazing to see wildflowers blooming this time of year, and even the grass/weeds being still atleast somewhat green. Looked more like spring than late summer! Normally this time of year most everything is dried out & 'dead' Certainly glad to see it.

Even at home some of the weeds & grasses in fields & along roads are still green or somewhat green... that too isn't something you see often this late in the season. I know the mountains have been decent monsoon rains, but even down here we've gotten a bit. have had a few nice little thunderstorms to watch off in the distance
You must log in or register to reply here.
Share:
Facebook Twitter Reddit Email Link
Top Bottom