I am a little surprised that nobody has started a thread yet for the 2022 Southwest Monsoon, given its exceptionally early and strong start. In fact, an article in the Albuquerque Journal yesterday quoted a meteorologist saying that since record-keeping began in 1905, this is the earliest that there has ever been a monsoon onset of this intensity in New Mexico. Very much needed, given the extreme drought in much of the Four Corners states. Here in Pagosa Springs, CO, we have had close to an inch and a half of rain in the past week, bringing us well above the usual June total of under an inch - and more is likely on the way before June is over. The attached pictures are of sunlit mammatus last evening after a rather light (compared to several other recent storms) thundershower passed over our house. 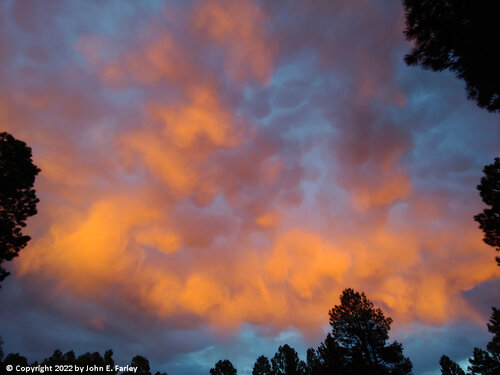 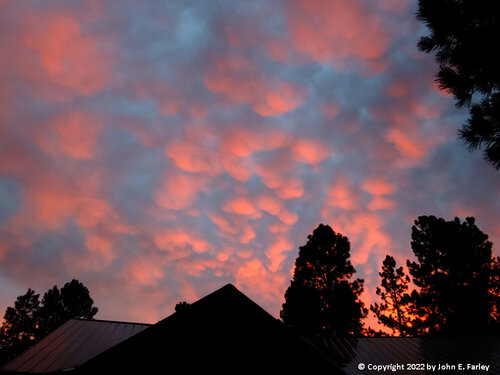 Here is a link to the article I mentioned in the post above:

Been a rather frustrating monsoon to chase in SE AZ so far -- especially with insane gas prices. Not-so-impressive CAPES, short-lived, pop-corn cells producing undercutting OFB's and a somewhat stabilized dust bed from rainfall -- if you are seeking haboobs. Low-grade lightning so far. I'm not a big fan of SW 500mb flow during the monsoon. Hopefully the easterly flow, along with embedded waves will arrive soon.

I'm fortunate to live in far southern Arizona where the early onset of monsoon has been very welcome. And scenic imagery is there, but you just gotta commit to the chase. I captured the first shot in my hometown of Rio Rico and is the first time I've ever had a bolt strike so close it illuminates all the raindrops in frame. The second was captured near Patagonia, AZ yesterday before the storm died out. I'd love to see a monsoon topic here.

That's a cool lightning shot with the raindrops! How close was that to you? I'm not very familiar with monsoons, but I'd imagine the blowing sand increases the frequency of lightning... all other things being equal.

Mark Gressman Jr said:
That's a cool lightning shot with the raindrops! How close was that to you? I'm not very familiar with monsoons, but I'd imagine the blowing sand increases the frequency of lightning... all other things being equal.
Click to expand...

Where I'm at in CO, we've had no storms this year...just a few little thundershowers. Its been pretty weird having basically nothing & its already July. (my mother said there was 1 heavier thundershower last thursday that lasted around 10 minutes. I wasn't around for it, but sounds like the only one that would even qualify as being remotely storm-like) Its going to be a very odd summer if we actually end up getting nothing this whole season.

As far as monsoon season this year, as much as I would love to see some good heavy rain and/or a good lightning show...I'm simply not going to get my hopes up...and just expect another dud like the past couple years.

The early activity in Arizona has been an anomaly. Very unusual, alternating SW/W, upper-level flow that has created issues with sprawling anvils and cloud debris lowering CAPES.

It looks like everything will reset late this week and we might get the usual S/SE/E pattern that offers a few easterly waves embedded in higher DP's. Maybe.
Reactions: GPhillips

Despite the great early start to the Southwest Monsoon season precipitation-wise, as others mentioned, there have not been a lot of lightning photo ops. Even with more than 4 inches of rain in Pagosa Springs, CO since the monsoon began around 3 weeks ago, the majority of the precipitation we have had here has been stratiform. But then yesterday, the lightning photo ops came on in a big way. A storm south of Pagosa Springs produced prolific lightning, much of it over the Archuleta Mesa, and some decent storm structure, too. Here are a few pics: 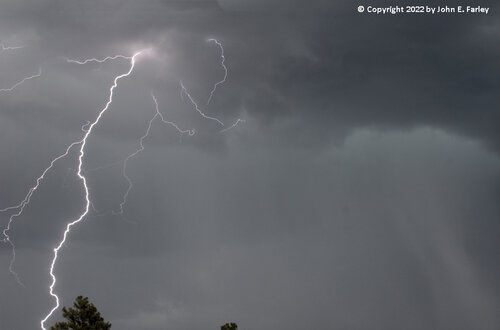 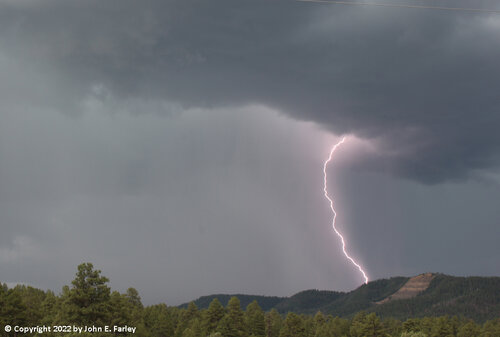 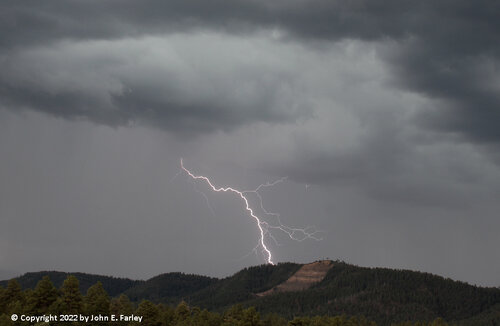 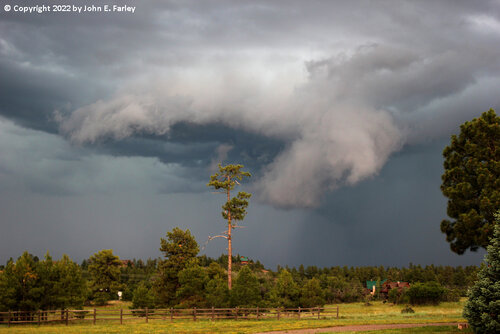 I saw a few strikes on the 5th on some little cell south of where I was at from making a store run.
Considering these are frame-grabs from a cheap dashcam they turned out ok.
I still have yet to have any storms or meaningful rain this summer..

Got some nice branched lightning in Santa Fe, NM last night. This was from a line of storms that seemed to develop on an outflow boundary from earlier storms a little farther east. These formed over the western part of the city and drifted slowly to the west or WNW. 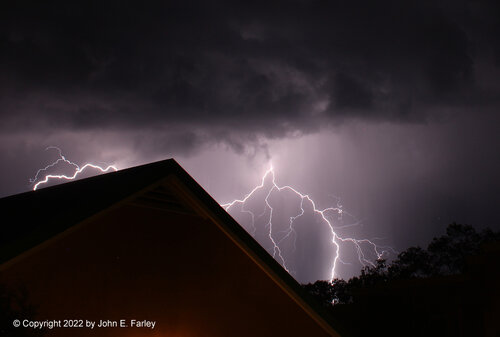 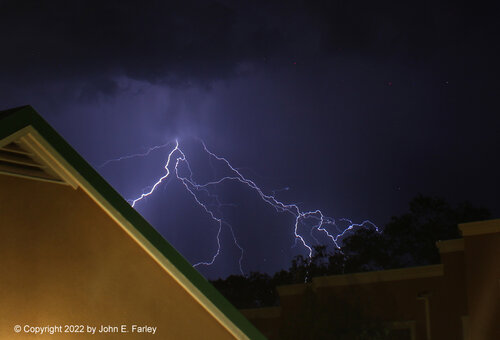 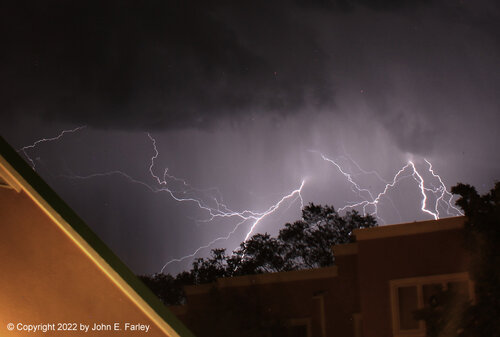 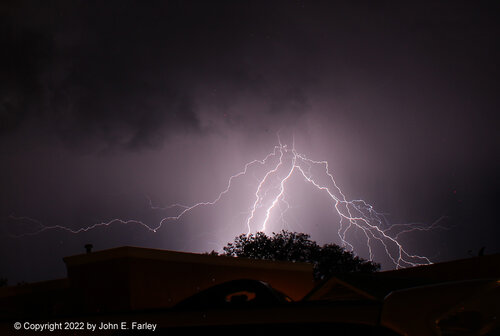 ---------
I've finally had a couple more meaningful rains here...
And had my first true thunderstorm of the season tonight. Its about time. I was starting to think this would be 'a summer with no storms'

..but for now, a few lightnings from a tiny/little cell (thundershower, not storm) that passed near me on the 24th.
(in the 2nd pic you can basically see what a little thing this was.. kinda surprizing it was actually spitting out an occasional lightning)

And a few pic's from yesterday afternoon looking west(& a bit north) towards a severe-warned storm.
I got the edge of this one/was within the warning ..
before it arrived, I sat out watching(& recording) its occasional strike. Then went in as the rain started. It gave a nice rain enough that I didn't have to water the garden.
Pic's 1-3 are various strikes(frame-grabs from video) during the storm. Pic 4 is a weird little 'feature' it had when I first went out..

----------
Later at night, I was treated to a nice lightning show from multiple storms. And got a good soaking rain from one of them
I probably sat up outside for a good hour watching (& grabbed a bit of video) of lightning.
Oh one of the things I love *and miss* about summer...watching thunderstorms at night!!
I did see one odd thing: there was a ground-level flash of light, it was orange-ish at first then turned white, then to very much cyan.
My only guess would be a powerflash? Maybe wind from the storm took out a tree or something that then took down some lines?
..The monsoon has finally made it up this far!..
My need for a thunderstorm has been satisfied for now

Here are a few pics I have gotten the last couple weeks in the Pagosa Springs, CO area: 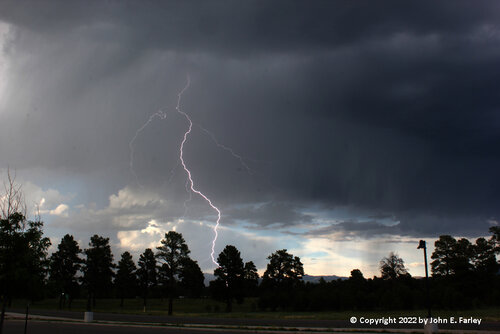 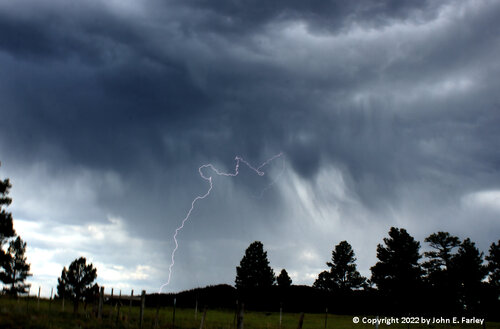 A little enhancement on this one, but the appearance was interesting as the precipitation was likely frozen (hail/graupel/snow) as it came out from the cloud base, as the cloud bases were pretty high this day, with a bigger difference between temperature and dew point. 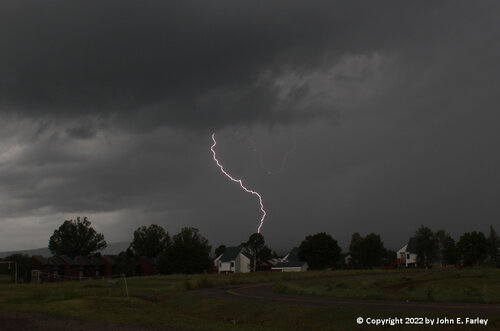 We are getting a good soaking rain tonight, and the monsoon in this area looks to be quite active for at least the next week.
Reactions: Randy Jennings, Mark Gressman Jr and James K

More monsoon storms last night!
I noticed lightning to my north sometime nearing 10pm, had a look at radar, also noting another storm to the south... then went just after 10 to stormwatch & video the lightning..
I certainly had a good dual 'light show' to watch. At some point, I noticed low-level clouds moving west - towards the mountains... Upslope flow!
Wasn't long after that that lightning intensity picked up a bit & the empty space between the storms filling in. Basically formed up into a QLCS type thing.
I'll just say that I was treated to an awesome "light show" last night, especially after the point when I noticed the upslope flow.

Not long after the QLCS formed up, I had to go in because the rain started.
Then it all consolidated into a single storm system (and went severe-warned/flood advisory).
So not only did I get that great light show last night, I got another good soaking rain

Now this is what I live for..my first true love! A good summer thunderstorm (and one that moved right over me
It was well worth staying up late for this. I deff would not want to have missed it!!!

(radar shots show the 3 points that I mentioned)

Here is the 30-day departure from normal rainfall ending 12Z on June 29. Some areas have received more than eight inches above normal rainfall. Given the intensity of the drought in the region, this is a godsend. 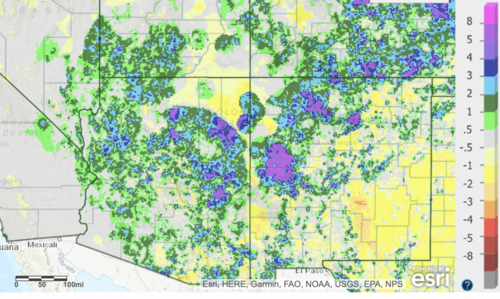 I am not sure if this is really the right place to post this, but since it has to do with the monsoon, I will post it here. Mods, feel free to move if this is the wrong place. My question is this: to what extent could this week's major flood events in St. Louis and in Kentucky be connected to the Southwest monsoon? I know there are other factors involved - a stationary front, the jet stream, and moisture directly from the Gulf of Mexico, for example. But I have also noticed that past several years looking at satellite pictures that clouds associated with the monsoon plume don't just stop when they get past the 4 Corners states, but often continue east or northeastward into the Midwest. Usually this time of year, big storms associated with stationary fronts or with the north edge of the heat dome are farther north, in places like Minnesota or Iowa. But often, in looking at satellite pictures, they seem to be a continuation of the monsoon plume. And with this week's flooding storms, that also looks to be true if you look at satellite pictures. Yet, although I lived in the Midwest (various places) for 60+ years before moving out west after retirement, I never heard any meteorologist associate any storms there with the monsoon. Yet there does appear to me to be some association. In addition to the satellite, "ridge runner" storms seem to circulate around much of the heat dome that is usually over the South and parts of the Midwest this time of year, and the northward surging moisture of the monsoon on the west side of the heat dome/high pressure area is part of this pattern. So, understanding that other factors are involved and that storms like those in St. Louis and Kentucky are not just a simple extension of the monsoon, I would be interested in any feedback on how they are related. And if indeed that is true, why don't people in the Midwest hear about it in weather broadcasts and articles. Thanks for any input anyone can share!
Reactions: James K and Mike Smith

@Mike Smith:
Yep, that certainly is good to see for those areas that have gotten above normal precip! Hopefully now with Aug upon us, that will move to some of the other locations that are still below normal..

@John Farley:
While I can't say I've looked at that myself, but sounds interesting.

I know that 'monsoon' by definition has something to do with a seasonal change in direction of the winds...
I'm wondering if *maybe* for locations farther north/east that wind-direction part doesn't apply? so its not 'officially' a monsoon?
(even if it is still monsoonal moisture being fed into the area)
Reactions: John Farley

4 frame-grabs from vids taken during the storms on night of July 27
(a great light-show that even video doesn't do justice. only way to do it is sitting out on the roof in person. .lol.)

My camcorder doesn't do great n low-light, so quality isn't the best.

Here's one of lightning over the South San Juans, looking east from Pagosa Springs a couple days ago. 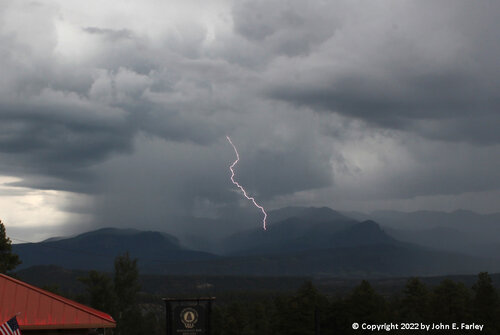