Right now the CAMS are all holding off precipitation today for some reason, or limiting it to the Tucson area. Cloud cover might be mucking up the forecast. In reality, any day has potential, as you know!

Warren Faidley said:
Right now the CAMS are all holding off precipitation today for some reason, or limiting it to the Tucson area. Cloud cover might be mucking up the forecast. In reality, any day has potential, as you know!
Click to expand...

Yup! Although the 15z RR has a lot of convection today, and it's pretty accurate. I dunno, we will see. Looks pretty clear southeast of Tucson right now. Bubbling over the mountains already, one cell by Sierra Vista.

Mike Olbinski said:
Yup! Although the 15z RR has a lot of convection today, and it's pretty accurate. I dunno, we will see. Looks pretty clear southeast of Tucson right now. Bubbling over the mountains already, one cell by Sierra Vista.
Click to expand...

*usually* pretty accurate is what I meant to say haha. I'm tired and want to head south to Tucson but looking a bit weak out there right now.

RH dropped to 21%. Some serious moisture issues this year.

Well I guess if you could issue a "High Risk" of dust storms, it would be today. Things are coming together today for what appears to be a big event. 500mb winds are exceptionally supportive of both venting and moving storms towards the west / northwest. Earlier satellite images appeared to show some gravity waves over the region from last night's complex in Sonora, moving north / northwest. The easterly flow should provide decent shear for monsoon-type storms, e.g, 20-30 kts. which might keep the outflow machine going as it moves west towards Phoenix and Casa Grande. Tucson's rh is holding, well in line with previous big events. The CAMS agree on forming a line of storms east of Phoenix by late afternoon. The skies have cleared and the launch pad is ready.
Reactions: Jason Boggs

Yessssss...looking great, and also a very strong potential outflow boundary with storms moving through Phoenix. Could be a wild night.

Had some isolated dust storms yesterday, but the main region of precipitation east of Phoenix did not gust out until after dark. There were also issues with the timing and intensity of convection due to early morning cloud cover. The Tucson storms went up at about the right time but the line of storms east of Phoenix was delayed. A south to north outflow boundary may have also interfered with the show. I have not looked at the upper air data from yesterday yet, but I suspect there might have been some inhanced rh in the mid-to-lower levels that may have mucked with the downdrafts. The ground between Phoenix and the eastern mountains received various amounts of rain, so I doubt we will see the mega dust storm this year, maybe a few smaller ones out west near Gila Bend, etc. like last year.
Reactions: Jason Boggs

Finally the monsoon has gotten going a little better in SW Colorado, with wetting rain here the past two days, totalling a little better than a half inch, with more likely on the way the next few days. i caught this lightning today looking west across Lake Pagosa. 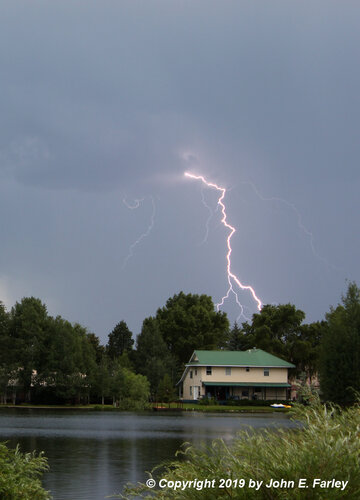 John Farley said:
Finally the monsoon has gotten going a little better in SW Colorado, with wetting rain here the past two days, totalling a little better than a half inch, with more likely on the way the next few days. i caught this lightning today looking west across Lake Pagosa.
Click to expand...

Had a pretty good lightning-producer in my area Sunday night (haven't looked at my vid to see if its anything worth posting on YouTube), decent rain too.

And apparently same type of thing on Sat night(with even more rain) but I wasn't home to see it...Camping in the mountains on Sat afternoon, we had a little storm move through, would have preferred it not rained, but at the same time I was glad to see it for the trees/etc up there. Got so see a few good not too far away strikes off that one as well.
Reactions: John Farley

The Four Corners high seems like it can't stop getting picked on. Great Basin trough will want to knock it out of the way by end of this week and probably scour things out again. If it was September/October, I'd be interested in troughy intruders for the shear & structure show, but doubt the jet will dip far enough into the moisture to make this one interesting.

Decent lightning options have still been in play. Wound up on a couple good shows around the San Francisco Peaks and out by Winslow so far. 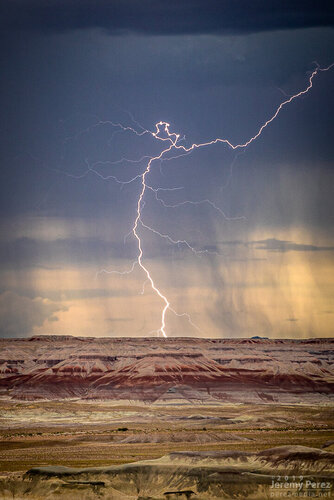 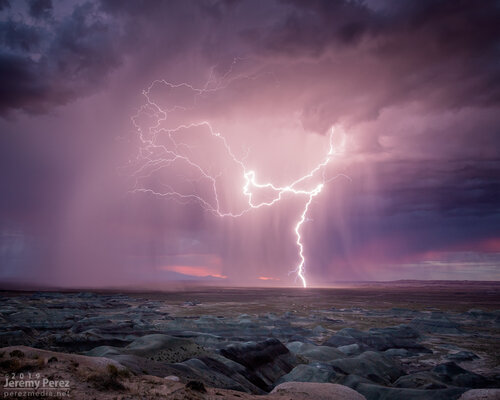 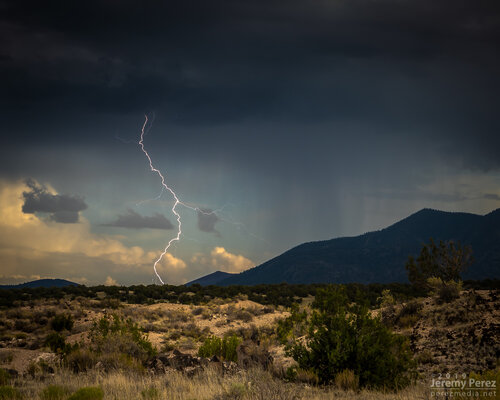 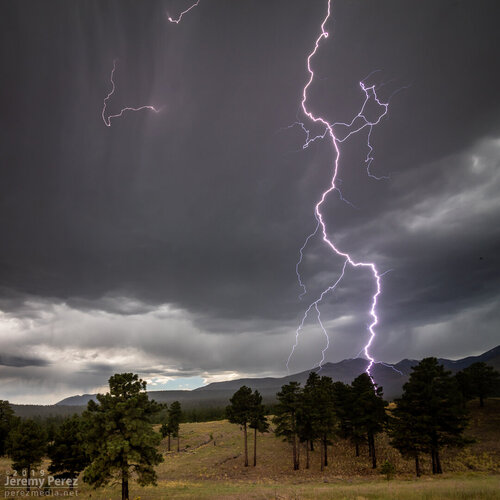 I am pretty pleased with these lightning shots from last night. These were taken looking east or northeast from Piñon Lake near Pagosa Springs, CO. And we got some much needed rain, too. 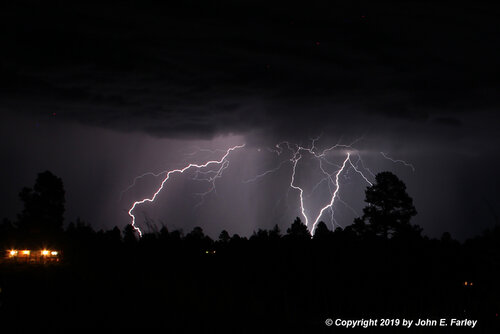 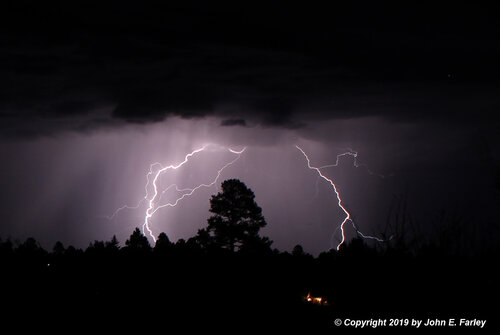 Those ^ are some great lightning pic's!

------------
Most recent forecast I saw for my part of CO was showing some better chances for thunderstorm & heavy rain the next few afternoons/evenings with monsoon moisture streaming into the state.
I'm certainly looking forward (ie: hopeing) to see some good rain...and lightning too.
Last edited: Aug 7, 2019
Reactions: John Farley

Quite a lightning show tonight in Pagosa Springs, CO, as we finally get a good push of monsoon moisture (though not much rain at our house yet(. Here are a couple of my favorite shots. 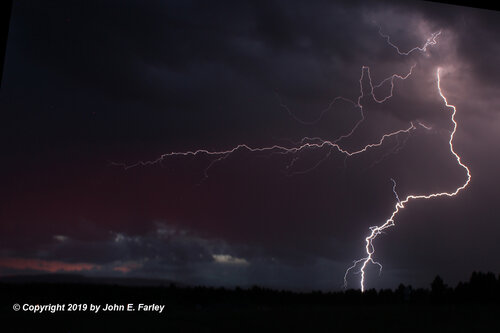 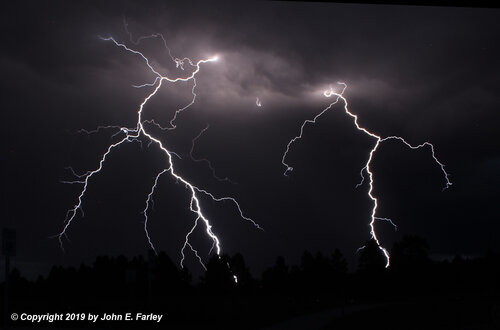 ------------
We got some reasonable rain Thurs night (enough that I shut off the yard sprinklers that were scheduled to water Friday), but other than that, what was looking like maybe a good weekend was kinda disappointing .lol. ... although seeing the SPC maps for today I'll be sorta keeping an eye on the radar for that northeast part of CO. If anything ends up building close enough, I might have to get the camera out.
Reactions: John Farley

Sunday... I got very little (a bit of light rain, and heard thunder way off in the distance - disappointing .lol.)... but that monsoon moisture certainly fired up some good storms up in the northeast part of the state! Multiple got severe warned, and even some tornado warned. They were a bit far for me to go though.

---------
I happened to be looking at the radar at just the right time to see the 1st one get severe warned (before it did, I was thinking 'that one is going to get a warning'). I watched for awhile longer (in part because there was a 2nd non-severe storm a bit closer, thinking the edge of it might pass over & I'd get some good rain/lightning).
That first one to get severe warned kept growing, and looked like it was getting just a bit of a hook on it (plus switching to the 'velocity' radar, looked like it had some rotation in that area). I thought "if any get tornado warned it'll be that one". My guess was right, because just a bit later it did. I also noted the spotter dots headed towards it.
.maybe. just .maybe. I'm getting a little bit able to pick one.

Even if I wasn't able to go out chasing, it was deff interesting watching the action on radar.
I have no idea if any of the tornado warned storms actually dropped a tornado, but I didn't see anything in today's paper, so I'm assuming not?.

Attached image is from later in the day when the storms were really going. I had to laugh at the lineup of green dots on that one storm...

With a modest and short-lived return of monsoon moisture, there have been some photo opportunities in northern New Mexico the past few days. Probably my favorite shot was this one of a dust devil with a storm behind it (about 20 miles behind it, to be precise): 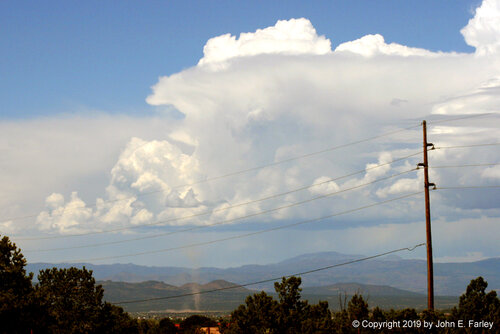 I have posted on my Web page a summary of the last three days around Santa Fe, with numerous additional pictures, including some good lightning. You can view it at: