Hey all!
I usually just ask a few spotter and/or meteorologist friends, and look through mine and others' photos, video, and radar data when I can't determine what I saw, but this particular instance has been bugging me and I wanted to share and see what anyone here might have to say.

For the 4th of July I decided to meet up with someone from a local storm enthusiast group in Colorado to take her to see at least a supercell, albeit I don't recall being overly excited for tornadoes.

We saw a poopy little cell out by Peyton that did have a brief, small wall cloud, with a brief small funnel. Don't remember exactly why, but decided to go after a decent looking cell to the Southeast along the same line, and things started looking pretty good near Karval so we headed South. A brief wall cloud formed, but much larger than the one in Peyton, so we felt confident in continuing South. It wasn't until inflow crossed the highway in front of us that I decided it was time to finally start filming. As we saw another wall forming in front of us we decided to get out on the next dirt road to watch it develop: 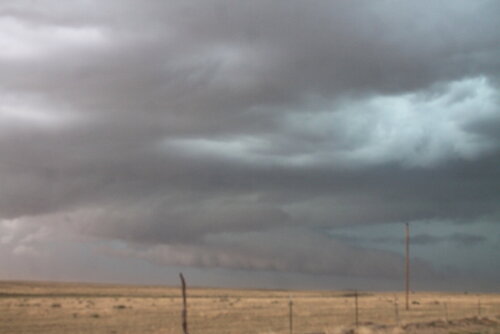 As this wall developed, a whirl of dust that looked to be a gustnado appeared to the East Northeast of the initial wall cloud, I hurriedly snapped a photo, having seen so many gustnadoes before, to continue watching the wall, which continued to grow rapidly at this point (I had to add contrast for you to even really see it): 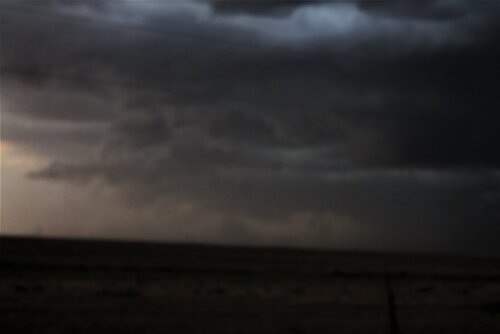 Glancing back at my "gustnado" one minute later: 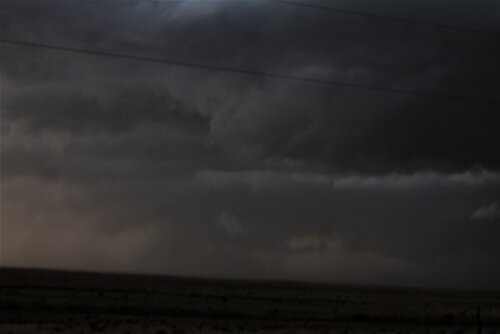 I'm starting to keep a closer eye on it at this point, from what I could see (and feel) inflow was moving towards it from behind us, to the left of it, and it was ingesting RfD (I made a little diagram, red arrows inflow, blue arrow RfD): 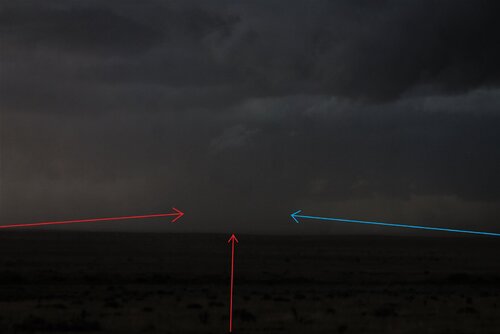 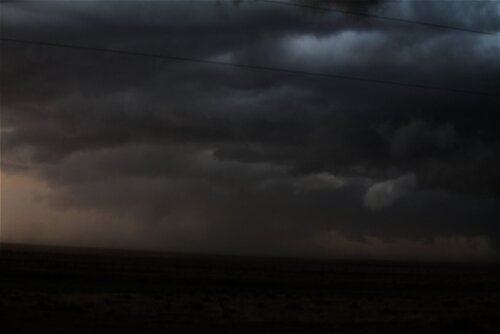 At this point, the video is fully rolling:

I talked to a photographer we saw on our way back who had been positioned to our North and claimed to have seen multiple tornadoes (she also sent me a photo of what appeared to be a landspout in front of a wedge), and some residents in Karval thought they had seen a tornado to their South. Someone at the National Weather Service that evening told me that while the storm did show areas of rotation on radar, bulk shear was too low (0-6km ~35 knots) for a "tornado that large." I thought that size and strength weren't correlated at all, Colorado has had some huge tornadoes that were landspouts. Secondly, wouldn't boundary-layer shear along the outflow enhance tornado potential? As I understand this storm was also moving into an airmass with higher CAPE. I'll try to get explicit permission to post a few photos by the others who were out there that day, a couple of photos by the person who went with me shows little swirls of dust, some with little ropes of cloud attached, that moved from the RfD region into the main "entity" as I will call it for now. My search through radar data does indicate some rotation on low and high elevation velocity scans, I'll be sure to post radar data when I get the chance as well!

There is some nonzero correlation between the visual width of a tornado and the ultimate rating it receives (provided it actually damages structures so that a numerical rating is possible...instead of EFU). However, there are many factors that go into how large a tornado visually appears, and indeed, sometimes very wide tornadoes turn out to be quite weak, whereas there have been some very intense narrow tornadoes (e.g., Pampa 1995, Elie 2007, Katie Oklahoma 2016).

Typically there will be other visual cues to the strength of a tornado such as how rapidly it is rotating and the degree of condensed vapor involved.

Offense not intended, but the photos you included are of too poor quality to determine anything. Frankly, I don't see a tornado in any of the media you presented. Mind the scud bombs.

No offense taken, lighting was very poor, it was very distant, and I currently have dust in my lens I can't seem to get out. This is why I'm hoping to get permission to post some photos by a couple of other people here. The amount of dust out there and the low cloud base would make me think any tornado that would have formed could easily appear very wide. Based on my best guesstimate it possibly crossed one road, but I don't think there's a single structure out there.

A radar shot with your location and direction looking would be helpful to orient us. But like Jeff notes, I'm not seeing anything I would consider a tornado (but then again my chase partner would tell you I think everything is not a tornado).

Randy Jennings said:
A radar shot with your location and direction looking would be helpful to orient us. But like Jeff notes, I'm not seeing anything I would consider a tornado (but then again my chase partner would tell you I think everything is not a tornado).
Click to expand...

Everyone has a personal bias, some chasers will think they see 10 tornadoes per chase, and others will think they never see one; I try and keep a happy medium and usually ask what I'm seeing if unsure, but the answer I got from the NWS left a lot to be desired.

Malorie gave me permisson to use her photos: 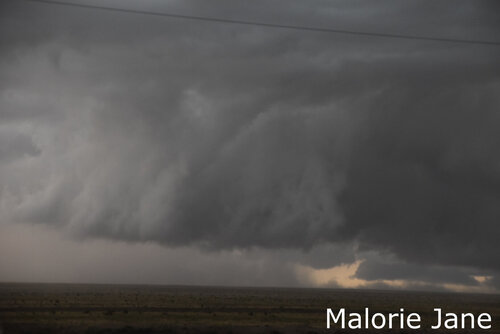 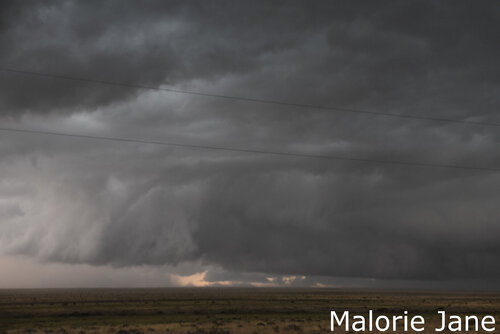 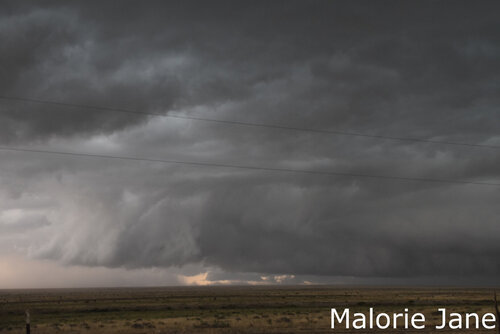 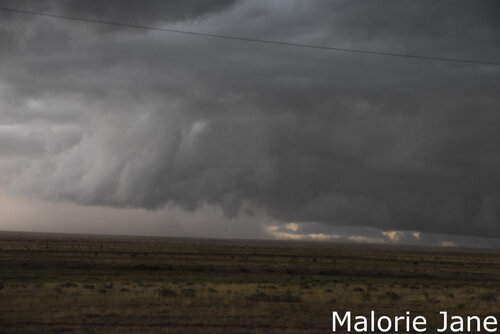 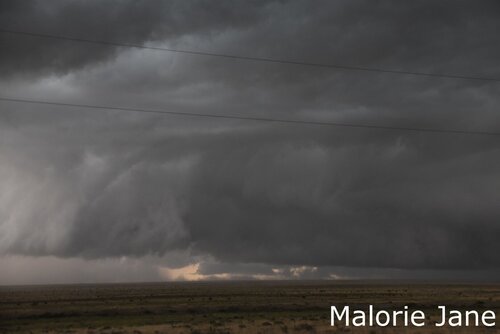 For reference, the dust was moving right to left in these photos, behind the wall cloud nearest us. 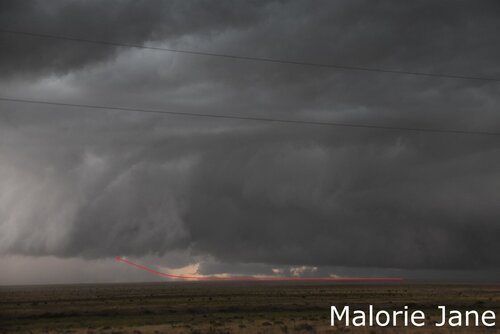 I almost space radars images, my bad! Here are a couple with our approximate location marked, the black lines in the first image delineate our approximate field of view during the event: 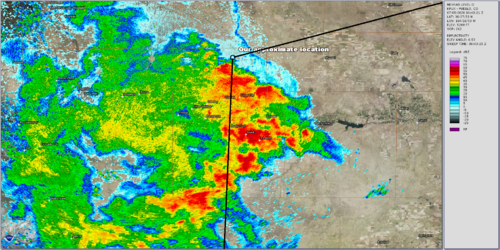 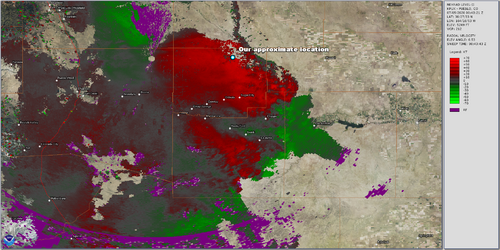 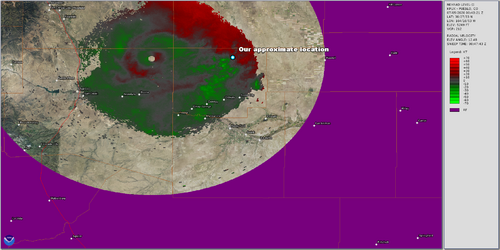