A total lunar eclipse is coming up in 4 days and it is the last one until 2018. Does anyone have any plans to photograph it? I'm still trying to figure out what kind of pictures I want to take, I just rented a good telephoto lens since I don't own one. Here is the current cloud cover forecast for Sunday evening (about 2 hours before totality) 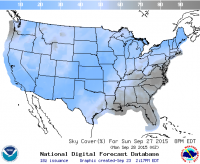 I wrote a blog post all about the lunar eclipse and how to see it here: http://darksitefinder.com/september-27th-2015-lunar-eclipse/

I will be. No telephoto for me, but might try getting the milky way with the Eclipse if it's in the right area of the sky. Either that, or attending sean parker ' workshop at an observatory to get the close up shots of it.

Probably just shoot for the milky way, and use my kit lens. That way I can actually still enjoy it, and see it in person...not through a telescope

Unfortunately the moon won't be near the milky way tomorrow, I've always thought that would make for a great shot. For those in the Western US the moon will already be in totality when it rises or shortly after. That makes for better picture opportunities with the moon so close to the horizon. Where I am the eclipsed moon will be about 30 degrees above the horizon.

Here's the latest cloud cover forecast from the 12Z NAM. 03Z will be just a few minutes after the time of maximum eclipse.

Unfortunately, even a fully eclipsed moon would be greatly overexposed, in order to record a decent Milky Way view. In other words, a 3 to 5 minute exposure needed to get much of the Milky Way,(at a high ISO setting), would make the moon look like a bright light bulb. Now, if the moon had a dark, deep red hue to it, maybe the brightest of starclouds would start to show up. Faster ISO settings to record the Milky Way would also make the moon that much brighter. But, there is always Photoshop, or double-exposing.

3 to 5 minutes?? That's WAY too long. All you really need is 20-30 seconds, about 3200 ISO minimum depending on your camera, and a fast shutter speed.

Yeah, if you are on top of a 12,000 ft. mountain, away from any city lights, and your lens is an f/1.0, and you tweak it on Photoshop. and, I am not talking about something barely showing up. Fast shutter speed?? I think you mean a slow shutter speed. The point of the discussion is you can't get both a good exposure on the eclipsed moon and the faint Milky Way in one shot, without some sort of manipulation. I challenge ANY photographer that has published or posted a breath-taking shot of the Milky Way, to say it was a raw image without any sort of manipulation.

All of my shots are done between a 20 and 30 second exposure time, with f/3.5 or 2.8 depending on the lens I'm using.
I've even done a few in my years where there's a bunch of light pollution. But out here its not nearly as bad as the east coast

Got this one out in sonoita which is a dark place, but the car drove by high beams glaring

Let me look through my computer and see if I can find the ones from my backyard. I have the lights from tucson that washed out the milky way from being visible with the naked eye, but it's there

This one I did from my backyard
http://i1322.photobucket.com/albums/u566/Kevin_Rimcoski/IMG_0059_zpseicbdffa.jpg

And any and all milky way shots will be altered. Otherwise you end up with the raw shot that looks like this or similar

That is exactly my point. Bringing out the Milky way by 'altering' it, you also would make the eclipsed moon way too bright. The only way to do it is a double exposure, or stacking the moon on the image of the stars. BTW, try that Milky Way shot on the outskirts of Topeka, and see what you come up with. (humidity as well as light pollution). Also, the digital age has spoiled most photographers, because of the extreme light sensitivity of today's cameras. 30 years ago, it was nothing to expose film for 30 minutes to get a good Milky Way shot. I know because I have done this; hand-guided BTW.
Reactions: Kevin Rimcoski

I'm not disagreeing with you there, that's the only way still today to bring out the milky way. You can see it, the camera can see it, but it's bland and not too appealing
Digital cameras have come a way to where astrophotography, especially milky way photos are becoming easier and more doable. But, even still you really can't do anything with the photo without tweaking it. Just the way it is now. The RAW photos are boring, they need to be edited.

I came across a tutorial on youtube that shows a way to get the milky way, even in heavily light polluted areas. Basically just expose to the right by about two or three steps....yeah it'll blow it way out, but like every other milky way shot, post processing is where a lot of work is to be done.

If I'm out at night in Topeka next May, I'll give it a shot and see what I can do.

And as far as getting the moon and milky way, it's not something I've done before...in the same frame that is. It'd be tricky because the moon moves a lot more than the stars do, so it'd be tough to keep it sharp. The moon would be the focus point, and the milky way just very subtle just to add some detail into the photo. I like to stay away from heavily altering photos like cutting and pasting other things into the shot...superimposing, whatever it is because it's not real. I like keeping them as real as they can be. So shooting the milky way in one day, then two weeks later after the new moon and shooting the full moon, and dropping it into a frame for a picture of the milky way just isn't an option.
Just getting a subtle bit of it in would be what I would go for....but tonight it's not even going to be in the right area of the sky, even by the time the milky way rises...so maybe I'll give it a try in 2033 lol

I managed to see it as it briefly poked through the clouds.

I watched the eclipse last night. Left camera gear in the car and sat on my back porch with a couple beers until it was fully in shadow. Luckily got a cloud free show.

It was too cloudy close to home so I went on a last minute camping trip to Eastern Iowa. It was cloudy there about half the time. Here are my pictures:

I had planned to do some longer exposures with my iOptron Skytracker. But I forgot a few pieces so the tracker was useless.
Reactions: Ben_Jacobi, Marc R. O'Leary and Kevin Rimcoski

Great work, everyone! I had a great time photographing the eclipse in Palo Duro Canyon State Park. This is a time stack composite showing the transition of the eclipse. See it better here: http://goo.gl/7t20DF