Scientists are seeing a dangerous shift in early-spring tornadoes

There is nothing new about a geographic shifting (decadal time scale) in tornado occurrences. Dr. Ted Fujita and his co-authors published a paper on the topic in 1975: There Is Nothing New About the Hypothesis Tornado Alley Has Moved East

The upward trend in "all" tornadoes is not surprising: more chasers ( = more observations), five years of various field projects in the South, understanding of QLCS tornadoes (that used to be dubbed "wind damage"), etc., etc.

But, the trend in violent tornadoes is clearly down based on NOAA figures. See graph.

If you think about it, the downward trend is basic meteorology. 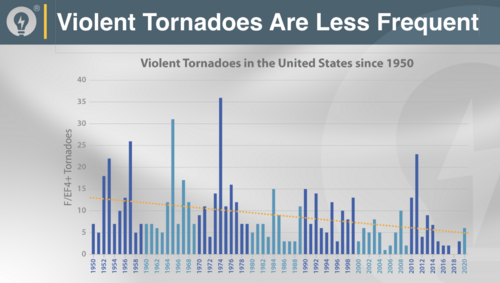 Detection and documentation of brief, weak tornadoes is way up in recent decades,
and it keeps improving every year.

Look at this U.S. tornado max probability map for 2002-2021 (attached). You can see
higher probabilities have definitely shifted more E.

But it is a bit misleading. I don't think the shift is as big as some think. It is just
that, again, detection is so much better now, and with the higher population E of
the Plains and just more objects to hit to reveal a tornado occurred, more tornadoes
were inevitable. These brief tornadoes were likely always there.

What I have seen in recent years is a significant increase in QLCS tornadoes.
Days with a raging squall line in the MS Valley or the Southeast, initially on
the SPC svr plot, you will see a ton of blue dots for wind reports, and often not
many, or no, tornado reports (red dots). Wait a few days, and I've seen it go from
nothing to 20+ confirmed tornadoes after surveys are done with red dots all
over SPC svr plot for that same day. The vast majority of QLCS tornadoes are
weak, even a bigger majority than discrete supercell tornadoes.

Squall lines were once thought to be poor tornado producers, but that's only
because we lacked the technology to detect them. Now with Level 2 WSR-88D
data, MESO-SAILS mode, and TDWRs, it is much easier to verify these brief
tornadoes, and the NWS can focus on damage reports where rotation was detected
on radar at the time. Plus, social media and cameras everywhere assist greatly in
the better detection and documentation of tornadoes. I recall reading some years
ago that 18% of all U.S. tornadoes were produced by squall lines. I bet that
percentage is considerably higher than that now.

Even with discrete supercells, detecting brief tornadoes has come along
way. Look at this very brief tornado that occurred in Centreville VA on 3/31/22
(storm report graphic attached).

It was likely not on the ground for more than 5 sec and traveled only 80
yards. Tree damage occurred, but prior to the WSR-88D and social media,
it is unlikely this would have been documented as a tornado and just
listed as straight-line tstm wind damage.

It makes you wonder how many of these brief tornadic spin-ups actually
occur every year across the U.S. that we still never detect and document due
to remoteness or lack of damage indicators. I bet there are hundreds. The
30-year average annual tornado number in the U.S. is currently about 1200,
but I bet it is actually closer to 1500, especially when you consider the vast
remote areas in the Plains and Rockies.

And one other item, is this tornado shift E really that much more of an overall risk?
Violent U.S. tornadoes show a solid downward trend whether you start in 1950,
1975 (Fujita scale adopted), or 2007 (F to EF scale). So more tornadoes overall
further E, but the overall intensity is decreasing. 100 weak, brief tornadoes don’t
even come close to the impact compared to just one violent, long-tracked tornado
given the same population area.

Good points, Mike and Boris. That said, I still wonder if there is some eastward shift. Seems like there have been more large outbreaks (and more outside the "traditional" tornado season) near and east of the Mississippi River than in the past. And most chasers would say the southern plains have been less active, on average, in recent years, suggesting some shift of tornadic activity eastward and perhaps northward. I agree the overall rising numbers are mostly attributable to better detection, and that there may be more improvement in that in eastern areas, due to greater population density. But with all the chasers roaming the plains and higher-quality radars today, I suspect there has been a significant increase in detection there, too.

Regarding the frequency of high-end tornadoes, I am not disputing the notion that there are fewer, but there could be a human element in those statistics, too, in the form of much more rigorous damage surveys in more recent years since the development of the Enhanced Fujita Scale. Maybe some of those "violent" tornadoes in years past when damage surveying was less rigorous were not quite as violent as we thought at the time? I certainly recall a time when wind speeds in tornadoes were thought to be higher than what has been verified by motile Doppler radars in the past decade or two.
Reactions: Mike Smith

John, in more recent years, mobile radars have lead to the conclusion that wind speeds in tornadoes are generally higher than thought: | EarthSky The EF-Scale underestimates wind speeds.

In the late 1980's (before Twister) storm chasers thought we would never see another tornado again in Kansas and Oklahoma. Then, from 1990 (Hesston) to 2013, the Great Plains came to life. Now, we are back in a lull period.

Boris makes the excellent point about the Centreville tornado path (measured in yards). When I was in school (early 70's), we were told "squall lines do not produce tornadoes except at the LEWP (line-echo wave pattern, or crest)." Now, advances in science tell us it is the opposite. Plus, with all of the VORTEX reachers running around the Southeast, it is inevitable that numbers there would go up.

Give it until 2032. If numbers aren't rising again in the traditional Tornado Alley, then it might be evidence of a genuine shift. Right now, I don't see a climate change footprint in this.
Reactions: samuel stone, Todd Lemery and Warren Faidley

I think too many people conflate weather and climate. Do I agree that spring and even winter tornadoes are becoming more frequent and intense? Yes, but I don't totally buy that tornado alley is "shifting" East, and if you look back at annual maps you'll see that "shift" occurs in both directions. The recent increase in tornadoes West of the Mississippi makes complete sense with warmer temperatures and the area's high humidity, a region well West of "Dixie Alley." The Great Plains have suffered drought before, like during the dust bowl, and while tornado data from the time is limited, it's safe to assume there were fewer tornadoes in the region during that period as well.

I've mentioned before just in the last 5-7 years or so, advances
in tech have made the detection and documentation of weak,
short-lived tornadoes so much easier. This is most apparent on svr
wx days when the dominant storm mode is a huge squall line w/
many straight-line wind reports. As that 24 hr period for the svr wx
ends on a SPC log, often you will see none or very few tornadoes
reports. This was quite apparent for the svr wx event in the MS
Valley on 4/13/22.

I did not save the initial SPC svr plot from the first day, but it only had
2 or 3 tornadoes plotted (red dots). I have subsequent plots. One from
2 days later, one from 3 days later, and one from 8 days later (all NWS
post-storm surveys completed). Attached are the svr plots for later days.
Notice anything?

The total goes from 22 to 34 to 47, after just 2-3 the first day.
Some of these are duplicate reports, but best I can tell the actual
tornado count for 4/13 was 39. All but 2 were EF0/1. So that's
consistent with what you'd expect for a QLCS event, and it shows how
better tech and reporting really has jacked up the tornado counts for
the weaker, short-lived ones, and also largely explains the higher
tornado frequency noted in the MS Valley in recent years. These
tornadoes have always likely been there, just we have not been able
to detect and verify many of them prior.

I recall some years ago, it was said that ab out 85% of all U/S.
tornadoes were weak (EF0/1). I have to wonder if this value is
more like 90% now given detection an documentation is better.
Also, we have seen a declined in EF3+ tornadoes, which would
further raise this percentage.

Many WFOs no longer send LSRs out for tornadoes until after they are formally confirmed. It's not how the NWS regulations say it should be done, but I think they find it less stressful to not have to retract if it comes up straightline instead.
You must log in or register to reply here.
Share:
Facebook Twitter Reddit Email Link
Top Bottom