When referring to features such as a Moisture Axis or a Theta-e Ridge, what are the definitions of Axis and Ridge?

I think that I understand an Axis to be an imaginary line that bisects a feature/area.

Even if that is correct, I still don’t think that I understand what a Ridge is when it’s being used in this way. (I’m assuming that the word Ridge is being used in a completely different way than when it is used to describe an area of increasing heights as in a characteristic of Planetary Waves.)

Troughs and axes are the same thing, but differ in sign (of the second spatial derivative of the respective field).

A trough is a (generally) latitudinally extended region of lower values of a field. I say "(generally)" because technically that has nothing to do with the definition of a trough; troughs can be at angles to lines of longitude as well.

A ridge in the 500-mb geopotential height field is delineated with the dashed dark blue line in the image below. 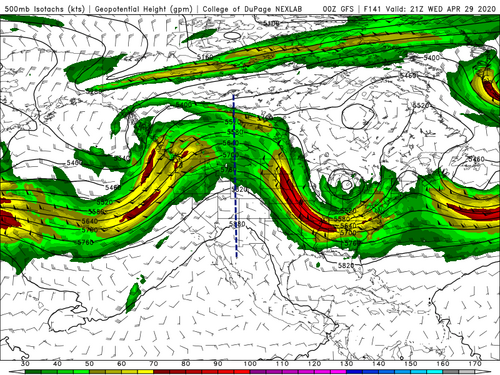 To convince yourself this is a ridge, pick a point on the line and then draw an imaginary line perpendicular to the ridge axis at that point. Moving away from the ridge axis, the heights fall...in both directions. This means the line is at a local maximum in the height field.

It actually hardly matters whether you go truly perpendicular to the axis or not. The only directions along which you could move and have heights increase are those that are nearly parallel to the axis itself (going from north to south).

This is a good example of a ridge axis. Sometimes axes are "tilted" relative to geographic coordinates so that the axis is not perfectly south-north. But that doesn't mean they are not still ridge/trough axes.
You must log in or register to reply here.
Share:
Facebook Twitter Reddit Email Link
Top Bottom