Louisville was on my short list of possibilities for my 2010 move. I decided against it primarily because the terrain around the region is pretty bad for chasing, and most of the Midwest tornado action is farther west anyway. Louisville has its days to be sure, but nowhere near what IL offers. That being said, I like Louisville - it was on my list because it is a familiar place along my longtime I-64 route to the Plains from WV.

Moving to Nebraska this year was for a great job opportunity. Can't say having a better starting point to head out for most chases wasn't on the mind either lol.

Glenn Dixon said:
I had never really thought about this before, mainly because it wasn't so bad to get to a lot of storm chasing from the DFW area. But now I'm thinking that in a few years, when the pensions kick in, I might -- *just might* -- have to do at least one real good full-season megachase. Car rental, lots of La Quinta's and Denny's. Gain 15 pounds. I have about 36 months to plan this out. Thanks for the idea!
Click to expand...

That's exactly when I will have any hope of a "full-season megachase" - retirement! If money were no object, I would spend retirement winters in the Caribbean, spring/summer/early fall in the Denver area, and spend as much of May/June on the road as I needed to, returning home only for extended down periods and otherwise stationing myself somewhere temporarily in the Plains (probably OKC or Wichita) during the shorter down periods.

But that's at least 18 years off for me... My firm does offer sabbaticals that I am eligible for in a few years; wonder if it's a "career limiting move" to actually take one? . Either way, could be a bit problematic on the home front to use a sabbatical to chase for four to six weeks!

I was stationed at Fort Knox for a year, and lived in South Central KY for a few years as well. The chasing wasn't that great. US-68/SH-80 west of Bowling Green was decent, but the rest of the state, as well as southern Indiana, was not good if you want a decent view of the storms. I did my share of chases in KY, and I do love the bourbon, but I didn't care for the taxes that are higher than TN and OK.


As far as relocating, I did just that in late 2013. I moved from TN to Central OK. Chasing was only icing on the cake for me though. I'm a native Okie, having grown up in the Tulsa area, and being forced to move with family in 2001. I still have family near Tulsa, but OKC was where the better jobs for me (as well as the better options for furthering my education). My grandmother passing away in 2012 was the primary catalyst for me moving back. The rest of my family isn't getting any younger, and my Dad will be retiring to NW Arkansas in a couple years. Family, and being back home at last, were the two sole reasons for me moving back. Anything else is just bonus.

So, I posted previously of deciding on Bentonville Arkansas in the very NW corner of the state. My wife made it clear she was no fan of tornadoes and didn’t want to be around them. So anyway, while having dinner after having her go down to Bentonville for the first time with me to get her stamp of approval, I’m noticing storms rolling in after only being here two hours. I also notice a tornado warning popping up also, which I don’t want her to notice. We got done with dinner and get to the hotel quick enough to beat the rain and I’m happy.
I think everything is good until I look at Bentonville’s Instagram page, which my wife also follows. Here is a post they made this morning which my wife hasn’t seen yet. Oh-Oh.... 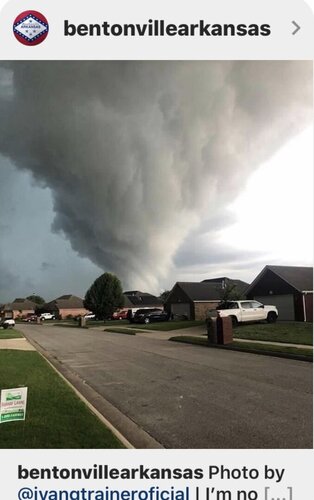