Relics of storm chasing past

See if you recognize these things that were common in storm chasing in the 1980s. 1990s and/or early 2000s, but are unheard of today. The last one is an old photo taken in the Plains of something that used to be a familiar sight. Post if you have more! Answers to this first image are blow. 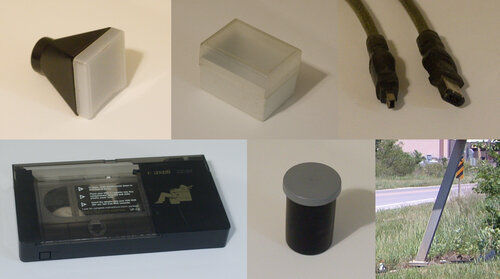 1.) This slide film viewer as well as the old "loupe" magnifiers were often a chaser's first look at a prized photo capture after receiving the developed slides back from a lab.

2.) There were several types of these slide cases common in the film era. You would recieve your slides from a lab in one or more of these, and they were handy for organizing groups of slides later.

3.) Most MiniDV camcorders used these Firewire cables for playback and capture of video into a computer.

4.) A VHS-C to VHS cassette adapter allowed you to watch or make copies of your camcorder footage in a standard VCR without having to connect the camcorder to your TV. Rewinding and fast forwarding was always faster in one of these than with the camcorder.

6.) These distinctive Kansas welcome signs with the angled support posts were at nearly every border crossing into the state up until the mid-2000s. 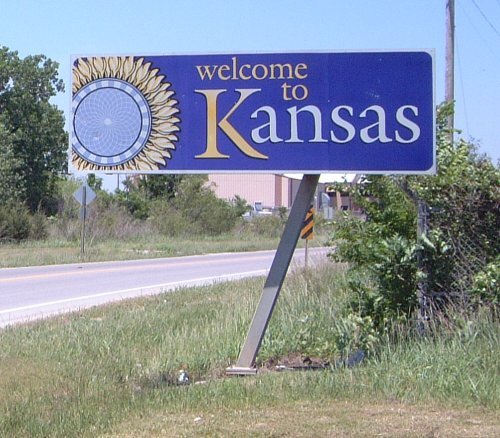 I got the Firewire cable, VHS-C adapter (there ain't no such animal as a Hi8 to VHS adapter, they're technically incompatible formats) and the film canister. Neither I nor my parents ever shot slides in my lifetime and I've never actually been to Kansas.
Reactions: Dan Robinson

Fun stuff Dan. I only recognized the VHS adapter and the 35mm film container. I actually was confused by the FireWire cable image, I didn’t recognize it as such, it just looked to me like it could have been a mini-USB or something. Like Andy, I never used slides. I would have never guessed the Kansas sign, I never noticed they had removed or changed the signs!
Reactions: Dan Robinson

Great list! How about wiring your mobile device to a laptop for 1X internet speed? Talk about painful.
Reactions: Dan Robinson and Andy Wehrle

I still use firewire to transfer video from my two HDV camcorders. I have an instant archives on tape in case the hard drive crashes.
Reactions: Dan Robinson

I have a whole bunch of those mini DV tapes laying around. A lot of my old storm videos are on them. I also used to have to use firewire to transfer footage between my old DV camcorder and my Imac G5. I can't find most of my old film slides though. Used to shoot a lot of film before I got a DSLR. Great post.
Reactions: Dan Robinson

I just cleaned out my garage this last weekend and came across my VHS adapter which allowed for playing the tapes in any VCR. I also found about a dozen old tapes. You had no way to transfer in the run now we just drag into drop boxes or similar. LOL!
Reactions: Dan Robinson

When I bought my first laptop in 2001 I did some backups on floppy disks. Quick quiz: How many floppys would you need to substitute for the memory capacity of a 64GB memory card? Anyone? Anyone?

Bob, great stuff - for a while in those days I was backing up all my stuff on CDs every year or so. If I did that now I'd need 11,000 CDs (8TB of photos and videos)! A single video file from my latest camera wouldn't even fit on 4 or 5 CDs.
Reactions: Bob Schafer, Jeff House and Andy Wehrle
You must log in or register to reply here.
Share:
Facebook Twitter Reddit Email Link
Top Bottom