Hurricane Irma has been upgraded to a Category 5 storm with 180-mph winds, and there is an “increasing chance” the storm will impact Florida, according to the National Hurricane Center. 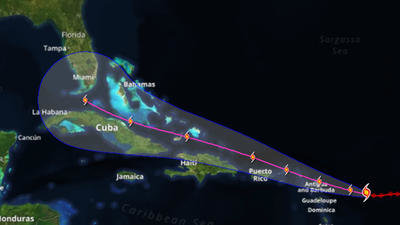 Irma poses the greatest danger to South Florida from Friday night through Monday, with tropical-force winds possible Friday night, according to the National Weather Service.

Most forecast models currently have the entire state of Florida feeling the impact of the hurricane.

Rick Scott said in a speech Tuesday in Naples.

Shortly after the 5 p.m. advisory update Monday, Scott declared a state of emergency throughout Florida in response to the storm.

“Hurricane Irma is a major and life-threatening storm, and Florida must be prepared,” Scott said. “In Florida, we always prepare for the worst and hope for the best, and while the exact path of Irma is not absolutely known at this time, we cannot afford to not be prepared.”


“Every family has got to get ready,” he said.

“There’s an increasing chance of seeing some impacts from Irma in the Florida Peninsula and Florida Keys,” it said. “Otherwise, it is still too early to determine what direct impacts Irma might have on the continental United States. However, everyone in hurricane-prone areas should ensure that they have their hurricane plan in place.”

According to the Saffir-Simpson scale, a Category 5 hurricane has maximum sustained winds of at least 157 mph. Irma is about 225 miles east of Antigua — and about 1,400 miles from Key West — and is moving west at 14 mph.

Barbados has issued a tropical storm warning for the Caribbean island nation of Dominica. A hurricane warning is in effect for, among others, Puerto Rico and the U.S. Virgin Islands.