Next week is looking interesting for a tropical cyclone intercept somewhere along the Gulf Coast. The NHC is forecasting a low pressure area to form in the southwestern Caribbean Sea and move across the "Yucatan Peninsula of Mexico on Saturday." They are giving the system a healthy 80 percent chance of formation over the next 5 days. Both the GFS and ECMWF and forecasting a strike in LA or TX during the Monday - Tuesday period.
Reactions: Tom Dulong and JamesCaruso

I wish I wasn't bogged down getting ready to reopen my gallery because this is looking more than likely...I've never seen the GFS so agressive in developing a major hurricane (Ida?) like this 3 days in advance. Other models aint far behind. Current landfall looks west of New Orleans Sunday....will be interesting.

I've been doing this a full 61 years and I have a very bad feeling about Ida. If you have friends/family from Beaumont to Mobile, they should be paying very close attention to this one. My latest posting, with full safety recommendations, is here: 1:38pm: Gulf Hurricane Outlook
Reactions: JamesCaruso and Warren Faidley

I'm also concerned, given the low-shear, undisturbed, warm water conditions over the Gulf. Although the models (ATM) are not forecasting Ida to exceed Cat-3 (below), "rapid intensification" is just what it means. I'm "scheduled" to arrive in Mobile, AL tomorrow PM, then relocate to Gulfport, one of my favorite places to chase. I have no desire to chase in the LA swamps or pursue inland flood chases because I'm a tropical coastline chaser. The biggest "no-go" right now is timing. The latest GFS and NHC forecasts have Ida coming ashore at around 9:00 PM on Sunday. I'm not interested in night-falling systems. However, because Ida is not yet an established cyclone, the timing is very likely to change, as is the path by 50 to 100 miles, most likely to the east.

I'm hoping local media is paying more attention to this potentially destructive cyclone, as the national media is busy with international affairs. 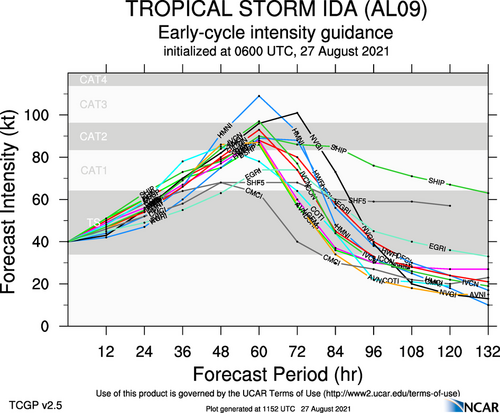 On my bucket list to chase a major hurricane one day, but it won’t be this one. No way I can drop everything and take off from work for any portion of next week. Even though the storm is on the weekend, there is always the concern about getting back in its aftermath.

That‘s the irony about tornado chasing vs hurricane chasing. Supercells are short-lived events and usually unpredictable more than a day or two ahead of time, whereas tropical systems can be tracked days in advance. But paradoxically, you can schedule a peak season tornado chasing trip months ahead of time and be pretty confident you’ll get something somewhere in the Alley. Whereas hurricanes are a drop everything and run, game time decision.
Reactions: Andy Wehrle and Stan Rose

Excellent chase along the MS coast, hugging the coastal highways as far south as possible without going into the LA death swamps. Did not want the inland rain / wind action that everyone covered, so opted for my favourite pursuits in the surge. Waveland, MS was my main focus, with a civilized chase allowing survivable surge wading and wind opportunities, although some non-friction-hampered gusts off the water were ripsnorters. Tried to grab a tripod with a heavy camera when it was hit by a large wave. It smacked a brachial nerve and my hand went numb. Hurt so bad I nearly puked and passed out. Went on shooting and it got better. Shot until I became hypothermic and darkness / batteries were an issue. Biloxi and the MS coast dodged a bullet with Ida. Had it tracked east a slight bit and had another hour or so over the Gulf, it might have been another Camille. Overall, about a 8 out of a 10 chase. Photo: Waveland, MS screen shot. 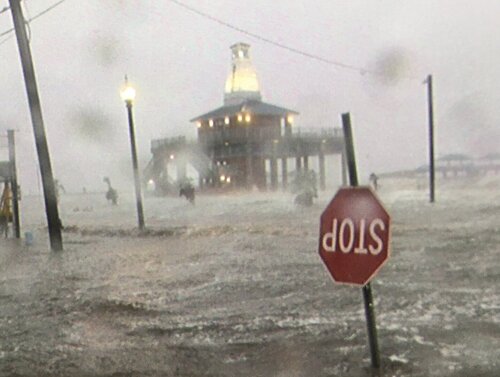 Here is a brief video I put together of my adventures in Ida's storm surge.

Great stuff @Warren Faidley but curious if you’d share a little about how you find a spot that you know is conducive for “survivable surge wading”?? Is it a matter of coastal topography, or is it something that could theoretically be done anywhere as long as there is an inland escape route?
Reactions: cdcollura and Andy Wehrle

It's a lot of planning before the storm arrives. You also have to consider the maximum intensity of the storm and the onshore vs. offshore winds. With a storm like Ida, I had plans for a manageable surge in my target (like what occurred) and the worse case scenario - surges to 20+ feet (Katrina). During my pre-storm surveys, I look for things like manhole covers (deadly) and very deep-drop offs. I still use my tripod to probe the ground for curbs, etc. The location must also have some photographic potential, e.g., palm trees. I always have multiple escape routes planned if things get out of control -- generally locations allowing me to still shoot the surge. If the winds are > 60 mph and the surge is 10+ ft., then I'm going to shoot from a garage -- but still moving into the surge when it's civilized. I'll also set up remote GoPro cameras. I've surveyed most public garages from Corpus Christi to Daytona Beach. I sometimes work with private condo garages to gain permission to stay there. I wear an inflatable vest, helmet and boots with puncture-resistant soles. I stay out of inland water, cut off from the ocean because of electrical hazards -- although there is still some risk. I'm working with a company who is developing / testing a personal current detector.

There are also some unexpected dangers in storm surges. I was once stung by some unfriendly sea creature and my leg puffed up like a balloon. I've seen snakes, barrels with hazardous material tags, turds, money (did not take it), a body (Katrina). One of the biggest hazards is debris. A chunk of boat or large piece of driftwood can float on top of the surge like a cork. With pre-storm / post-storm conditions or situations with offshore winds, I'm very cautious / avoid rip currents.

Working in a storm surge beats the living hell out of you. Fighting the currents, waves and winds is exhausting -- as is staying on constant mental alert for hours.
Reactions: cdcollura, Bob Schafer and JamesCaruso
You must log in or register to reply here.
Share:
Facebook Twitter Reddit Email Link
Top Bottom