Poor Media Use of Weather Terminology

This inaugural post includes a link to another thread where this is already discussed: VIDEO: Maryland Tornado (Ida), but also this entry:
https://twitter.com/i/web/status/1444320302750736385
This thread is meant to get laughs and also face palm at botched media coverage of weather events such as: The Truth about the "Baroclinic Leaf"

There was a lightning delay with tonight's Monday Night Football in Los Angeles...due to lightning...in a dome. Lightning has been occurring over the greater Los Angeles area this evening which has caused a 45 minute delay in the kickoff of Monday Nigh...

While the announcers were on the field (the teams had to be in the locker rooms but I guess TV people are expendable), they actually said,

"I'm not a meteorologist but I play one on TV. "
Reactions: Andy Wehrle

I watch Weather Nation. A couple years ago they were constantly referring to the northern plains as the "high plains", as if "high plains" means the plains that are up high on the map. I sent them an email about it, explaining that Fargo and Omaha, for example, are NOT on the high plains. I got no reply, and they continued doing that for many months, but I think they have finally quit doing that.

This year they all got very fond of the term "spin-up". Every time there was a risk for tornadoes it was "a chance for a spin-up here and there".

Another thing I saw beginning this year was that they displayed the 500mb relative vorticity graphic a couple times, without any explanation, as if more than 0.0001% of their viewers would have the slightest idea what to make of it.
Reactions: JamesCaruso, Andy Wehrle, Mike Smith and 1 other person

As someone who works (behind the scenes) for a local TV station, I see this a lot. I often glance over weather-related scripts and let the producers/anchors know to correct any that I find, usually copied verbatim from national network scripts.

Another common one is failing to update national scripts that dropped 6-12 hours ago, e.g. that "tropical storm" has rapidly intensified and is now a Category 4 hurricane. Weather changes fast. I always advise them to go right to the official source (SPC/NHC) or, better yet, ask our own meteorologist.

The amount of shoddy wire service reporting about weather is unbelievable. Makes you wonder about the accuracy of their other stories.

Andy Wehrle said:
As someone who works (behind the scenes) for a local TV station, I see this a lot. I often glance over weather-related scripts and let the producers/anchors know to correct any that I find, usually copied verbatim from national network scripts.

Another common one is failing to update national scripts that dropped 6-12 hours ago, e.g. that "tropical storm" has rapidly intensified and is now a Category 4 hurricane. Weather changes fast. I always advise them to go right to the official source (SPC/NHC) or, better yet, ask our own meteorologist.
Click to expand...

The old “clashing of air masses” causing tornadoes is a frequently made blunder. I remember a local TV met using the phrase to explain why a tornado outbreak happened and I tweeted her the link below which I think is informative in debunking the phrase: I frequently hear and cringe when TV meteorologists refer to rain and snow accumulations as "moisture". It is precipitation. The glossary of meteorology says moisture is water vapor suspended in the atmosphere. Not rain and snow. I wish the AMS would remove their seals of approval as this is repeated over and over and over again. End of rant.

Ehh - if they are saying "moisture content" then I'd agree. But it's okay to use a dictionary too Rain and snow are types of moisture.

well technically they are precipitation.

"High Water" .... Replace it with the correct choice of two terms. Either swiftwater or floodwater. As an NFPA and Internationally Accredited Swiftwater Rescue Instructor it drives me insane to hear a made up word used like this.

Swiftwater is any body of water with a current speed of 1.14mph or greater. I promise anyone out there that while you might be able to wade through rapidly moving knee-deep water, you're only one slip away from death. Debris loading which is extremely common in natural disasters only increases these forces exponentially.
Floodwater pertains to any body of static water or water moving under 1.14mph in an area that under normal circumstances is dry land.
Static Water - Lake/Pond.

To my knowledge, The Weather Channel was the first to use the term high water on air that I am aware of and for whatever insane reason its just been adopted by media far and wide. The reason this is poor terminology lies a bit deeper than just a word. If anyone in emergency management ever uses this term it is because they are just parroting what they hear on tv and have a cushy office job and lack the professional qualifications to speak on the matter (no disrespect intended).

For one there is no such term as "high water" listed in NFPA 1670 or used anywhere in the professional rescue world and the entire reason the term Swiftwater was coined was to better communicate risk with simple wording that is self-explanatory. If the average person hears the term high water it doesn't convey the true potential danger as Swiftwater does. I also wish the media would actually reach out to local responders, not an emergency manager in an office somewhere (no offense), but the boots on the ground people that actually conduct rescues and are well-versed subject matter experts in risk mitigation and disaster preparedness communication.

How many times have we heard our favorite meteorologist on air tell you that it's dangerous to take shelter from a tornado under an overpass, or turn around don't drown? Literally thousands.

How many times has that same meteorologist explained with more than 2 very basic reasons WHY you should never drive or wade through swiftwater or floodwaters...?
- In Swiftwater everything can kill you. Chain length fences, tree branches, anything that allows water to pass through but will not allow a human to pass through is called a strainer and they are everywhere and they are the biggest risk to people that find themselves in a bad situation.

Even more importantly, people should absolutely never walk in floodwaters in urban populated areas due to the fact they will 100% be wading through raw sewage containing dozens of waterborne pathogens and communicable disease's that can make you extremely sick or kill you. I know this first hand following the Columbia SC flooding of 2015. The first rescue assignment that day I was in my drysuit for 5 hours in one neighborhood plucking people from homes and swimming them to a boat or safety. Once we got everyone out as we walked back onto dry land we all smelt like human feces and had to do gross decontamination under the nozzle of our ladder truck with soap. With sometimes zero breaks between calls for service, we spent almost 30 hours nonstop conducting rescues. Once statewide resources arrived we got an hour break and then went back to answering calls for another 22 hours.The 22 members of our swiftwater team were either all on duty or were called in at the same time and we all worked for 52 hours before being told to go home and sleep, period. Most of us arrived back at the firehouse 10hrs later to only work another 48 nonstop. There wasn't a body of water we encountered that didn't smell like a literal dirty toilet. The best part was going a week later to get a witches brew of shots and tests to make sure we didn't contract anything we encountered.. An experience I will never forget.

Outside of the biological hazards mentioned above, it's also a chemical cesspool of hydrocarbons like gasoline & diesel fuel that are easily seen via sheen on the water or by smell along with god knows how many polar solvents are mixed into the water and may be much harder to detect.

Went on a hell of a lot longer mini rant than I intended, but educating and teaching people swiftwater rescue/boat operations/static water rescue is one of my biggest passions in life.

And because my petty side thinks "high water" sounds utterly stupid.
Reactions: Ken Perrin and JamesCaruso

Chris' post remiinds me of a photo I took of some standing water that remained in suburban New Orleans on September 21, 2005 (after Katrina). This was adjacent to the street in front of a house: 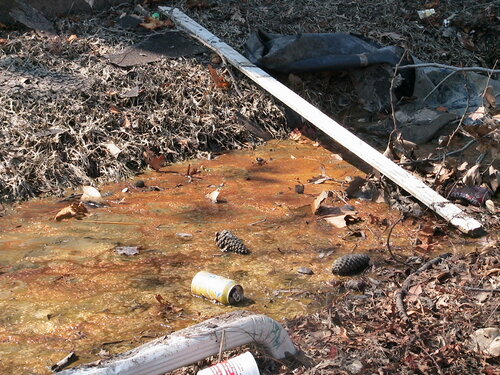 Bob Schafer said:
Chris' post remiinds me of a photo I took of some standing water that remained in suburban New Orleans on September 21, 2005 (after Katrina). This was adjacent to the street in front of a house: