Would love to hear your opinion on the following. Every year me and my chase partner get to spend 10 days of chasing in the States. As we're living in the Netherlands we just have to pick a date and see if the atmosphere comes up with something interesting. The major downside of course is that we're not flexible to chase any developing outbreaks. The upside is that we chase anything that's marginal or above and always get suprised by the chaotic atmosphere. We just enjoy the roadtrip, the scenery, meeting chasers from all over the world, and learning lots of new things every year.

So the dilemma: this year work obligations gives us two options. 1) fly on the 3th of May towards Dallas or 2) fly on the 31th of May to Minneapolis. We usually chase in the beginning of May, but would love to hear your opinions and reasons. Thanks a bunch!!

I would definitely pick the end of May over the beginning. You have bigger odds of having to chase East of I-35 where the terrain isn’t as favorable for chasing in Early May as opposed to the end of May. Early May also seems to be more likely to have all the the moisture pushed back into the Gulf of Mexico (zero chase opportunities), although I have no data in front of me to present.
You might have to drive further to start chasing from Minnesota, but that would be the least of my worries.

In four years of chasecations I’ve chased once in the first week of May and three times in the third or fourth week of May. All years are different of course, but we’ve had a lot more success towards the end of May. 2016 we had good tornadoes on the 22nd, 23rd, 24th and 25th of May . 2019 we got some tornadoes on May 20th, 22nd and 23rd.

Thank you so much for your replies! Had a good look at the SPC severe weather climatology yesterday. Was a bit surprised that the tornado probability is still pretty much focused to panhandle area. I wonder if, due to climate change, the statistics have altered in the last 8 years. Does anyone know if the SPC is working on an update of these statistics?

Bonne van der Veen said:
Thank you so much for your replies! Had a good look at the SPC severe weather climatology yesterday. Was a bit surprised that the tornado probability is still pretty much focused to panhandle area. I wonder if, due to climate change, the statistics have altered in the last 8 years. Does anyone know if the SPC is working on an update of these statistics?
Click to expand...

Really hard to factor in the drought right now. In recent years, the dry line has moved further east, often leading to storm maturity near I-35, especially early in the season. The late season inversion is always hard to predict, but a really strong one can end a season early. The trend backed off slightly this year. A lot depends on your comfort level of not-so-chase friendly issues and terrain further east, e.g., crowds on big days and poor visibility east of I-35. If you have limited time, it has to be considered. I always suggest last season chases in the Amarillo, Dodge City, Goodland, Lamar regions after May 25th or so. If worse comes to worse, terrain-forced storms can still offer something in New Mexico and Colorado. Good luck!
Last edited: Dec 24, 2019

I can't really add much to the answers above, other than saying we always target the last 2 weeks of May into early June. Although there have been many big events in early May, later on and into June often sees slower-moving, more photogenic targets on the High Plains, and the evenings are lighter for longer too. My money would go on late May.

Of course, in the end, it comes down to pure luck of the synoptics at the time! But climatology, for more chaseable set-ups, for me, is your later option.

I think everyone would agree that the latter half of May is preferred, but it sounds like that is not an option for the OP. If the choice was early May or early June, I think I would go with early June. Even if the synoptic pattern is not ideal, there is more of a chance of mesoscale events. There is generally an abundance of moisture and instability, and all you need is a small perturbation in the flow to make something happen. Sure, there could be a death ridge, but you can get that anytime in May too. A jet stream that retreats to the north may provide opportunities in the Dakotas, whereas in early May you are unlikely to have sufficient moisture and instability up there. Generally a broader area is open for business in early June (southern plains, central plains, northern plains), and upslope comes into play (Colorado, Wyoming, even Montana). In early May you can get great events but they are more likely to be one and done. In June you can get multi-day opportunities.

I'd definitely choose late May. 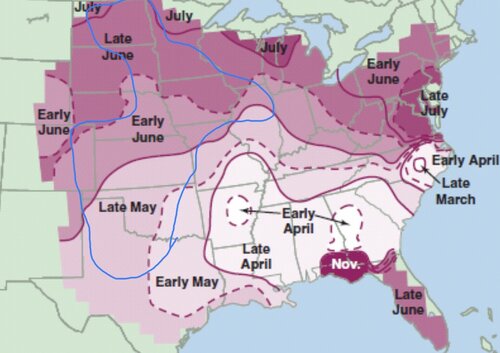 Here is a bit of a visual for choosing when to go. I roughly highlighted in blue where there’s fewer trees and a decent road network over an image showing peak tornado activity in the US.
Reactions: James Taylor, Warren Faidley, Sean Mullen and 1 other person

Thx all for your considerations! We decided it’ll be late May/early June. Haven’t decided on where to fly to yet. Direct flights from Amsterdam are only available to Dallas and Minneapolis. Denver would be preferable I guess but that comes with a stopover which always kinda tricky when flying to the States.
Reactions: Jason Boggs
You must log in or register to reply here.
Share:
Facebook Twitter Reddit Email Link
Top Bottom