Commerce Secretary Wilbur Ross threatened to fire top National Oceanic and Atmospheric Administration employees if the agency didn't disavow a tweet from a regional office that contradicted President Donald Trump's false claim that Hurricane Dorian was likely to hit Alabama, according to a...

For the record, several models DID show Dorian crossing Florida and hitting the Gulf coast including Alabama. This was also noted as a possibility before and after the President's "board" by TWC.

What Warren said is true - up to a certain point in time. But the reason I posted the article was because it points to a politicization of the NWS, which IMHO is never a good thing no matter who does it. Also, there was talk by politicians about Dorian potentially hitting Alabama long after there was any chance of that happening. Let's leave weather forecasting to the meteorologists.
Reactions: Mark Blue and Jeff Lieberman 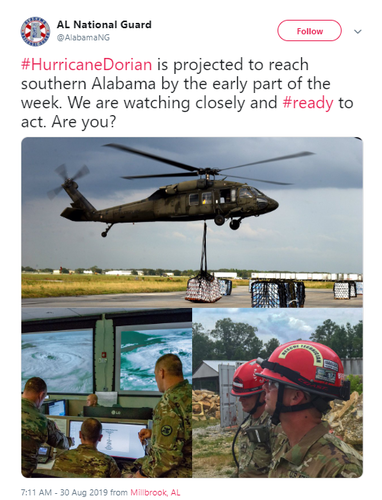 Kind of thought it was blown way out of proportion by the media. Donald Trump is from TV, any news is good news to him... So you would think the news would stop overreacting to every small little thing like this. Sad to see the weather community suffer the consequences of their political fight. 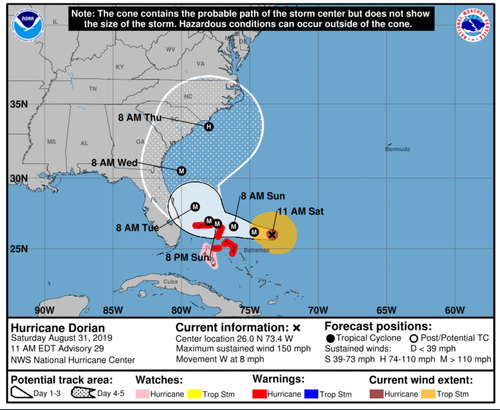 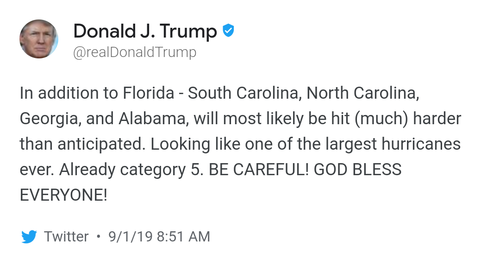 This was the tweet, that suggested end of times for Alabama.

This is the response trying to calm people down from such a tweet.

Better not see anyone bashing someone's forecast a week out claiming another May 3 1999 is on the way, based off the responses here.
Reactions: Tony Cook and Timothy Schaffer

Another news article on this subject:

Warren Faidley said:
For the record, several models DID show Dorian crossing Florida and hitting the Gulf coast including Alabama.
Click to expand...

But the NHC forecast certainly did not on Sunday when the President said it was looking WORSE for Alabama. And are we to really believe that the White House terrorism expert briefed the President using 4-day old ENSEMBLE maps?


Jacob Parrish said:
Sad to see the weather community suffer the consequences of their political fight.
Click to expand...

Actually the weather community was hurt by his statement, and then his followup lies. You cannot have the President overruling the NWS when it comes to forecasts. You cannot have NOAA putting out an unsigned press release (which follows a blanket NWS email) telling offices that if the President tweets out about a hurricane hitting Michigan they have to remain quiet. It's a bad precedent.

Good find TJ - even the National Guard stopped talking about Alabama being hit before Sunday.

Anyone in the weather enterprise should be TERRIFIED about the President making fake weather forecasts, lying about it, and then having his people threaten the National Weather Service for putting out the correct info.
Reactions: Jeff Duda, Jacob Parrish, NancyM and 5 others

Remember, this story comes from the New York Times, one of the most inaccurate sources for news in America.
Reactions: Todd Lemery, Jacob Parrish, RPuskas and 2 others

Warren Faidley said:
Remember, this story comes from the New York Times, one of the most inaccurate sources for news in America.
Click to expand...

Actually no - the Wall Street Journal has been covering it. And the NOAA Press Release which had a direct lie and threatened the Birmingham WFO was posted on NOAA"s website. So at some point it's kind of clear that it has nothing to do with the newspaper reporter.
Reactions: Timothy Schaffer, John Farley and JeremyS

Unfortunately, someone will believe this.
Reactions: rdale

It amazes me how anyone can see 2 sides to this story. Donald specifically said on Sunday 9/1 that Alabama was going to be hit hard. That was incorrect. No models or forecasts at that point showed this. Once corrected by the Birmingham NWS and confronted that he was incorrect, rather than admit he made an error or correct his statement, he CHANGED his story to trying to say, "well at one point Alabama was going to get hit and see here are all these old maps and models and tweets from the Alabama Nat'l Guard from several days earlier that shows I'm right". Then he made his Sharpie map.

It's like people somehow don't comprehend how DIFFERENT those two things are. Who cares if spaghetti plots from when Dorian was first forming showed Alabama maybe getting hit! I don't look at the GFS from 4 days ago to try and make a chase target when I'm chasing. How can someone use that defense for this guy?

I'm not sure if he somehow didn't have current information(scary if he didn't) or just didn't understand where the storm was going(also kind of scary), but then of course bc nothing is never "normal" with this guy, we get stories on directives being issued to the weather agencies to only agree with the King or risk being fired. Disgusting.
Reactions: NancyM, Tony Cook, Timothy Schaffer and 1 other person

When your first response to a misleading, intentionally wrong forecast is "But one of the reporters who wrote about it doesn't have the same political bias I have" -- that should give you pause...
Reactions: Brady Kendrick and John Farley

Link doesn't work for me.

Warren Faidley said:
Remember, this story comes from the New York Times, one of the most inaccurate sources for news in America.
Click to expand...

You might want to chill with that overblown rhetoric. Yeah, NYT has some reasonably questionable opinion pieces and occasionally gets things wrong, but overstating their errors like that conflates NYT (which many people would argue is still a reliable source most of the time even if they occasionally have high profile blunders) with sources like InfoWars, TYT, Breitbart etc., which are pretty clearly among the most inaccurate news sources in America.

Furthermore, subsequent stories on this issue have come from other sources such as the Washington Post. But really, all one needs to do is check in with the happenings at the annual NWA meeting. Louis Uccellini and Neil Jacobs himself have spoken there and corroborated the reporting from the NYT, so this is not an example of a mistaken news story.
Reactions: NancyM, JeremyS, Quincy Vagell and 4 others

Not sure what happened - here's a better try at the Horowitz article... After signing the order, a beaming Trump pronounced “total victory” over the weather, which he called “the enemy of the people.”

President Trump told his staff that the National Oceanic and Atmospheric Administration needed to correct a tweet that seemed to contradict his statement that Hurricane Dorian posed a significant threat to Alabama as of Sept. 1, in contrast to what the agency’s forecasters were predicting at the time. This led chief of staff Mick Mulvaney to call Commerce Secretary Wilbur Ross to tell him to fix the issue, senior administration officials said.

Trump had complained for several days about the issue, according to senior officials who spoke on the condition of anonymity due to the sensitive nature of the matter.

Mulvaney then called Ross but did not instruct him to threaten any firings or offer any punitive threats, officials said. He simply told Ross that the agency needed to fix it immediately, leading to a new statement that was issued on Sept. 6.

News is speculation and somebody said something these days. There's no reason to form an opinion early on. Where did NYT get that threat of firings bit? Today NYT said "planes" targeted the towers. That's why people hate the NYT. It's not that they make a habit of blatantly delivering lies.

Obviously Trump was wrong. I believe he was just ignorant of the updated forecast and ego driven after that. That is my opinion. He has been criticized from all sides such that I'm sure you become numb to it or have to block it all out at some point. People would have never known he was so bad at weather if he wasn't such a tweeter, haha.

I noticed at the end of the Washington Post article linked above they say, "Meanwhile, a new tropical weather system is brewing, and this one may actually hit Alabama."
NHC has it at 60% and there is no official forecast. Yes I know they link an article explaining details but I thought it was unusual to risk making a forecast mistake.

"News is speculation and somebody said something these days."

That's why respected news sites like the NYT and WaPo usually require 3 independent, reliable sources before printing a story. Without that, yeah, news reportage is unreliable and always has been.

"Where did NYT get that threat of firings bit? "
I don't subscribe to the NYT and can't read the article. I presume they were anonymous sources who were "in a position to know". The Commerce Department simply denied it. It's being investigated by the NOAA Inspector General and the House Energy and Commerce Committee of the House of Rep.

“I am extremely disturbed by the directive that NOAA leadership sent on September 6, which threatens the integrity and public trust of weather forecasts at the peak of Hurricane season,” said Rep. Eddie Bernice Johnson, D-Texas, chairman of the House Energy and Commerce Committee. “The Committee will pursue this issue and we expect full cooperation from the Department of Commerce in our efforts." Reported firing threats, along with an unsigned statement on Hurricane Dorian backing President Trump, are now “matters under review by NOAA's inspector general.


Here's a summary of the incident from a reasonably unbiased magazine: Believe it or not, the news cycle sparked by President Trump's Hurricane Dorian tweet from more than a week ago isn't nearly over yet. The New York Times reported on Monday that after the National Weather Service's Birmingham office contradicted the president in clarifying that Alabama was not...