My wife and I took a Covid-safe road trip to enjoy some of the sights across eastern WY and the Black Hills/Badlands in South Dakota... my primary goal was to do some astrophotography, namely in the Badlands, but also to take my wife to some of the places she's never been that I LOVE getting up to. This was my first non-chasing trip to these areas.

The shot above was taken at Devil's Tower, we had gone up there earlier that evening prior to sunset and originally had no plans to shoot stars there. But we stopped for dinner at the base of the monument and decided to wait out the sunset to give it a shot. Skies were clear and there was no smoke/haze, so we took advantage.

I am VERY new to this kind of stuff, having dabbled in it a few times off and on through the years. But prior to this year, did not really have the lens to capture the images I wanted. I purchased the Nikkor 14-24mm back in May and have used it one other time for this kind of thing. Also, I had not taken the time to learn to process it, and surprisingly, had never really used Lightroom to its full potential (I'm a Photoshop guru).

So finally it all came together... and for one of my first "major" outings, I am thrilled with the result. I still need to learn a few things (the 500-rule was revealed to me AFTER this trip when I was reading up on processing), so I could've done better exposing the foreground, but I like the silhouette look. The colors are fantastic, and I love that the distant urban lights added a little variation to the colors.

Clearly, I was very liberal in my processing, but again, it was my first time going through the steps in Lightroom. I think the details were brought out very well. As for the photo itself, It was shot on my Nikon D750 at 14mm. I did a 5 second exposure at f2.8 at 6400ISO. Again, at 14mm, I could've kept the shutter open 20-30 seconds without star trails and probably would've exposed the foreground better.

Still though, I am EXTREMELY pleased with this... I feel I have a basic grasp on shooting the milky way and starscapes better, and now that I have done some hands-on post-processing, I am excited for future opportunities.
Reactions: Warren Faidley, TimMaynard, JamesCaruso and 11 others

Nice shot, Tony! When you are looking at that concentrated part of the Milky Way, you are looking into the center of our galaxy! You have some major nebulae and areas of interest in there too, such as the Lagoon Nebula and the Scutum Star Cloud.
Reactions: Tony Laubach

I have also recently begun scratching the surface of astrophotography using the same camera as Tony and using the lens he sold me earlier this year (Samyang 14 mm with f/2.8 at most open). I figured this would provide an enhancement over the 24-120 mm kit lens that I got from Nikon with the camera body.

In September I took a trip to some of the national parks in Utah and did some night photography. Unfortunately, after pulling the images off my camera and taking a detailed look at them, I was dismayed to see that pretty much all of my star shots were ever so slightly out of focus. After some help from @Brett Roberts and some experimenting, I discovered that this was because "infinity" focus was not where it was marked on the focus ring of the Samyang lens. I had been previously just assuming that if I crank the ring all the way over (to where it was marked as infinity) then problem solved. Alas, that was not the case, and it resulted in many of my pictures from that trip with that lens turning out less than fantastic (although not unusable). I discovered that if I wanted true infinity focus I needed to turn the focus ring to about the 3-meter position on the ring. Shooting at somewhat higher f-stop values (like f/5.6 to f/9) also helped keep the resulting images crisp. However, I find that the 24-120 mm kit lens with 57-point AF capability still seems to do ever so slightly better, but that's splitting hairs at this point.

I made up for this by taking a weekend excursion recently to Walsenburg, CO and hiking the Spanish Peaks. With my newfound knowledge of how my lens works, I was able to get some better shots.

My favorites are the star trails. Here is one from each lens within the past 13 months: 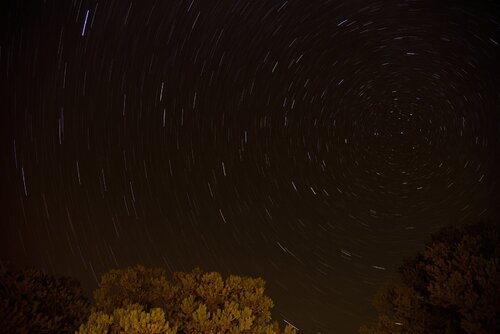 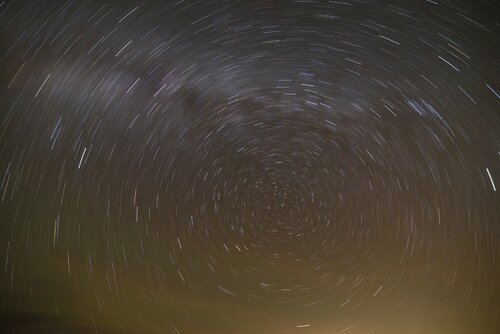 Both of these have exposure times of around 25-30 minutes. Since I only have one camera, it takes a lot of commitment to leave your only shooting option in use for such a long time straight. But I love what it illustrates about the geometry of Earth.

Among Milky Way shots I have gotten, I really like this one since I appear to have captured a distant galaxy (probably Andromeda). 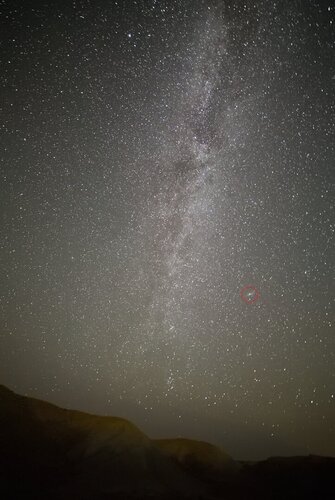 . It's a lot more dependable, albeit still not without its stresses if quality skies are several hours from home and the cloud forecast is borderline.

Due to excessive boredom from quarantine, I ventured out several times this season. Here's the last shot I got in early September just SW of Clayton, NM. It doesn't get much better than eastern NM for the combination of dark sky, flat horizons, and abandoned structures galore. 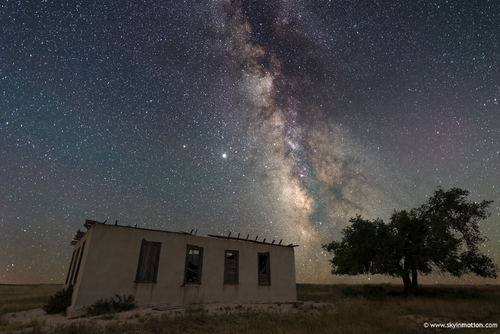 Took a short trip to a nice dark sky site a few months back for some Milky Way photography.
I like how some of the shots turned out 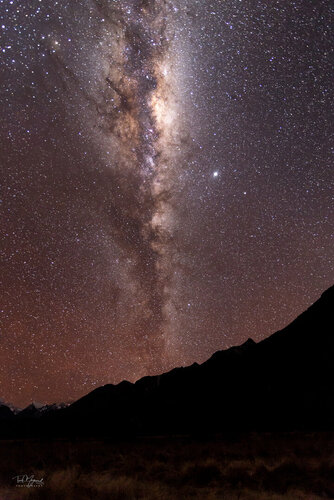 Astrophotography is one of my favorite genres of photography. I have learned a lot of useful techniques over the past couple of years. Here are two shots I took while in White Pocket, Arizona last month. The first photo, I used a technique called star stacking which dramatically reduces noise that is common among photos that utilize a high ISO. In the second photo I used 100 separate exposures taken in a row for the star trails. I prefer this method over utilizing a extremely long shutter speed. My instagram username is @codytaylorphoto 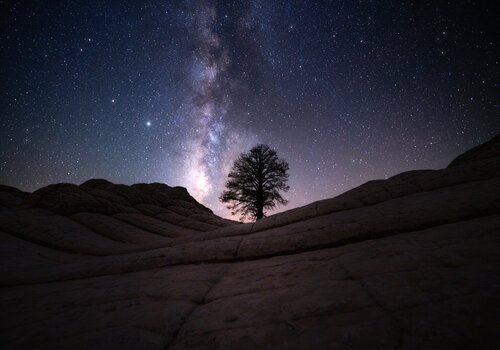 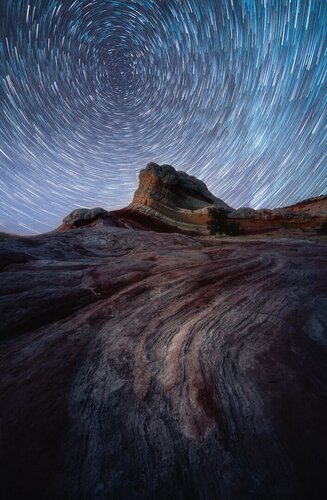 Brett, I have always admired the quality of the photography work you do, both in stormscapes and in non-stormscapes. You have a true talent for taking amazing shots. Keep up the good work.

I'm very impressed with all of the responses in this thread! Those shots are what I seek to be able to capture.
Reactions: Tony Laubach
You must log in or register to reply here.
Share:
Facebook Twitter Reddit Email Link
Top Bottom