I had not heard much about this series of events until recently when Roger Edwards mentioned it on Twitter.

https://twitter.com/i/web/status/1128043663890755586
From what I've seen, there was a roughly 8-day long stretch that featured clusters of tornado activity across the southern Plains vicinity. About 60 tornadoes affected the area with 21 significant, F2+, tornadoes. Strong tornadoes occurred during 7 of those 8 days. It looks like most of the tornadoes were associated with a dryline and occurred from the OK/TX panhandles into western/central Oklahoma. 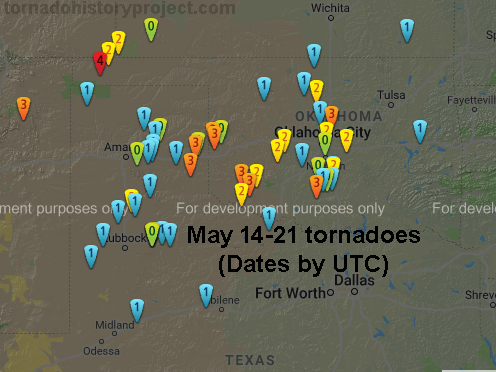 The sequence, if you will, started with an evening F3 tornado in northeastern New Mexico, which caught my attention. Over the course of the next 6-7 days, the dryline lit up just about every day.

I was curious to see what the upper level pattern looked like and the mean 500mb heights/anomaly chart for May 14-21, 1977, was highly amplified. It is even more amplified than the 2008 case that I mentioned in another thread. What you will see is the presence of a highly anomalous ridge from the Mississippi Valley region into the Great Lakes and even toward Hudson Bay. This is fairly unusual for mid-May. To the west, a deep, vigorous trough was prevalent across the West, which leads one to believe that shortwave energy rotated around the base of the trough, multiple times, impinging on the High Plains and resulting in dryline supercell activity. To go along with the ridge, sharply negative height anomalies over far eastern Canada signify a blocking pattern was in place, sustaining the overall pattern for about a week. 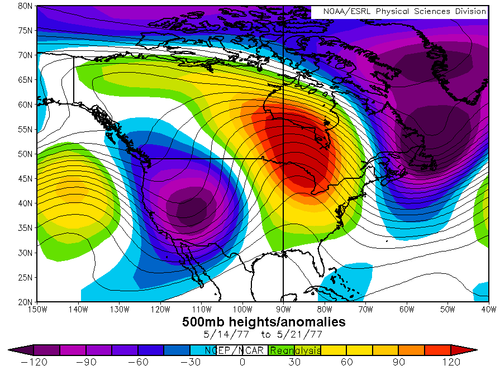 Interestingly enough, as @wxmann / Jim Tang pointed out, May 1977 also featured a rare mid-spring snow storm in the Northeast. I was not alive for this storm, but having spent most of my life in New England, I'm well aware of its significance in local climatology. Snow is not uncommon into early April, but beyond mid-April, snow is quiet rare in southern New England, until you get back to late October. This is especially true for significant snowfall. There was snow in that same area this year, but the May 9th, 1977 snow event was truly historic. With trees greening up, over a foot of heavy, wet snow caused quite a bit of problems during that event, but I digress.

The connection is that a lot of these mid to late May periods with above average tornado activity are often associated with blocking troughs over or near eastern Canada. Prior to the increase in tornado activity, it is not uncommon to see the eastern Canadian trough axis near parts of New England, supporting below average temperatures there and, occasionally, late season snow.
Reactions: Greg McLaughlin, Randy Jennings and Dan Robinson
You must log in or register to reply here.
Share:
Facebook Twitter Reddit Email Link
Top Bottom