Matthew Cappucci: I'm being chased away from storm chasing ... by storm chasers

Maybe if the people writing about leaving the hobby will actually leave the hobby our roads will be less congested? 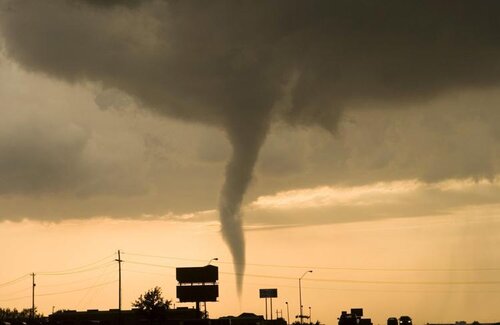 I had heard grumblings about the downsides to storm chasing for a long time — poor driving habits, traffic jams as cars converge near violent storms and the dangers of rogue chasers and hobbyists. It had always been on my mind, but four years of venturing to the Plains had taught me it was just something I’d have to live with. I always brushed it off as an unavoidable byproduct of chasing.

But Monday was different. I witnessed firsthand the practices that will drive me away from the sport I once loved with my entire being. The past week of storm chasing has been eye-opening. In just seven days, I’ve encountered:

The dangers speak for themselves.

There’s a reason why my biggest fear about storm chasing isn’t weather-related; it’s not the softball-sized hail, it’s not hurricane-force winds and it’s not even lightning or the tornado. It’s other chasers. On Monday, when a large tornado passed by Mangum, Oklahoma, the Oklahoma Highway Patrol reported just one injury, not from wind but “involving two vehicles with storm chasers.”

The perils have been manifest before. Three storm chasers were killed in an accident in Texas on March 28, 2017, when a pair of Weather Channel contractors blew through a stop sign at 70 mph. In 2013, veteran storm chaser Tim Samaras fell victim to a tornado near El Reno, Oklahoma; his son, Paul, and chase partner Carl Young also perished. A Weather Channel vehicle was tossed 200 yards, breaking the driver’s neck. Scores of other chasers cheated death that day.

But so far, the storm-chase community has been incredibly lucky. On its current track, storm chasing is a ticking time bomb. It’s only a matter of time before a major catastrophe occurs — with many more fatalities. Chaser-clogged roads and an erratically moving tornado are a recipe for disaster. It’s not a matter of if — it’s when.

Much of the problem stems from the sheer number of chasers on the road. Back in the 1970s and ’80s, there were only a handful out there. Those who were were generally trained atmospheric scientists who understood the dynamics of what they were dealing with.
But the mid-2000s ushered in an era of do-it-yourself storm chasing — popular TV shows such as the Discovery Channel’s “Storm Chasers” and the advent of smartphones spurred many to think, “I can do this.” And in many cases, they can. But in my opinion, they shouldn’t.
It’s easy to turn on the TV and see a severe weather risk area plastered on a map. Driving to it is simple. And nowadays, high-resolution computer models are made available to the public online. The sheer amount of information out there gives the tools of the trade to anybody. But that doesn’t mean they know how to use them.

Storm behaviors change. Cell service drops out. And computer models are often shaky at best. Today’s “home-grown” storm chasers may have what they need to get by 99 percent of the time. It’s easy to know what to do when things go right. But it’s only a matter of time before things go wrong.

It’s not just amateurs contributing to this chasing turning point. “Professional” storm chasers, too, are only making it worse. With stiffer competition and more of it, many are taking to the extreme to get the best, most up-close footage. This often means taking unnecessary risks and putting others at risk as well. Yet time and time again, it’s gobbled up by the public, encouraging this “bad behavior” further.

Branding things as “extreme” gets clicks and views. That makes money. And across the board, we’re much more likely to celebrate an “extreme storm chaser” than we are a “safe storm chaser.” You’re not going to turn on the TV and see a headline that reads “storm chaser records tornado from a safe distance.”
It’s part of a larger cultural issue that’s in the process of redefining storm chasing. For many, the practice we fell in love with simply doesn’t exist anymore.
And with big profits on the line, the dangerous behavior will only get worse. Illegal driving won’t be policed by law enforcement; they’re busy during severe weather. And there’s no real way to limit practically the number of storm chasers or tourists that venture out.

It’s going to get worse before it gets better. And it will take a major event to drive greater change and prompt discussions about the sport in general.
Maybe it’ll be from more devastating car accidents. Perhaps a tornado will sweep over a chaser traffic jam. Or maybe an “extreme” storm chaser won’t have dumb luck on their side. The number of things that can go wrong are endless.

And one of these days, they will.

Matthew Cappucci is a reporter for The Washington Post.
Reactions: JohnHuntington and Jeff Duda

It's important to know why people like Cappucci are in the position of reporter (link is a full Twitter thread):

Meh, good riddance. I had never heard of this guy before last year and he comes in with that typical "new person" attitude of "OH MY GOD EVERYTHING IS EXTREME!!11!!11!" and now after some time spent in the hobby has realized it is not quite the party he might have first thought it was. Boohoo.

Agreed with your very first sentence, Steve. This also ties in with the current thread on excessive chaser convergence that has been going on for weeks now - this aspect of the hobby isn't going to change. So either adapt or put your money where your mouth is and actually stop chasing. We don't need Washington Post affiliates or any other journalist "going out on the road with us" to tell the world what the hobby is like. We know what it's like, and those who choose to still do it are, by definition, still okay with that.
Reactions: Randy Jennings, Jenn Staib, JohnHuntington and 9 others

“Big profits on the line.” Maybe 10+ years ago. And once again, the clowns who continually promote the majority of this lunacy, including their sponsors walk free. This is like saying “please stop smoking because it kills people,” but leaving the tobacco companies alone.
Reactions: Jeff Smith 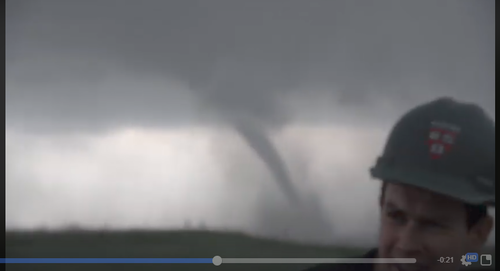 Try to say anything to/about him on twitter and you'll get the honor of being blocked. Dudes website says his DOB is August 1997 or that he's 21 almost 22. I don't think at that age you earn the right to complain about any hobbies being too crowded.
Reactions: Quincy Vagell, Jenn Staib, Mike Z and 9 others

Roads were nice and clear yesterday in North Central Kansas!

It you're gonna chase SPC bullseyes, don't be surprised when everyone and their mother also show up...
Reactions: Matt Salo, Jeff House, Ben Holcomb and 1 other person

I have seen quite a bit of sensationalism coming out of the Washington Post lately. I'm afraid @Dan Robinson is right. Journalism has been replaced with Sensationalism.

Can we sing "nah nah nah , hey hey hey, goodbye" to him or is that to much?

The guys who talk about leaving the hobby never actually do. They just whine louder and louder until somebody gives them something to suckle on.
Reactions: Chris Dickerson and TJKLECKNER

Iowa 2% never has a crowd

Gotta love all those claims and not a single shred of firsthand photographic evidence.

But hey, who would've thought to bring a camera on a storm chase, right?

Buh BYyyyyyyyyyyyyyyyEEEEEEeeeeeeeeeee. Im all for people leaving the hobby. Although for every one that leaves, 3 more arrive. So it won't help.

Same old crybaby sob stories year after year about convergences etc etc. This is just the way it is going to be now, especially on a high end Oklahoma day that falls on Friday, Saturday, Sunday or Monday. You have the weekend warriors, plus the chasecationers and something I noticed more this year - an increasing number of university caravans - seriously I saw probably 4 or 5 different university groups rolling 3/4 vehicles deep. It used to be just CoD but now it seems more and more universities have joined the chasing bandwagon. Another thing are large groups of foreigners. I think they contribute to some of the traffic issues because theyre not used to our laws or even driving on this side of the road. But I digress.

There are so many ways around these problems I wont even bother listing them for the 32984223423th time. Just 2 days ago I documented a beautiful 30 minute long tornado from touch down to rope out and saw maybe 3 other chasers the entire time. HMMMmmm
Reactions: Jeff House, Dan Robinson and Chris Dickerson

I chase the Ohio Valley and am seeing an increase in local chasers here too. What worries me is that we know the "authorities" are looking for a legal way to restrict access to storm areas and I think the use of "tornado emergency" in warnings is a precursor to local cops deciding who can be on the roads and enter areas when a Tornado Emergency has been declared.
Reactions: JamesCaruso

Wow, I thought this video was a parody!
Reactions: Mike Z, William Spencer, Steve Miller and 1 other person

It amazes me that people pay other people to write the same story over and over and over. This guy should go work for Cosmo. They've been printing the same issue for 50 years.
Reactions: KendraReed, Jeff House, Dan Robinson and 4 others