tks @Mark Blue ! but it didn't work until i quit RS on desktop and quit RS on IOS and restarted although i don't know if the desktop restart triggered it or it finally activated on its own. i rarely use my iphone unless i can't get to the desktop and this wouldn't work if you didn't have the iphone app it looks like.

still, it's one less step than having to go back to SN and hit some random update buttons. using that method i also have to quit and restart the RS apps. and if i only have my iphone it would be a real pita to have to open a web browser to open SN to hit those buttons.

Guy Teague said:
If I only have my iphone it would be a real pita to have to open a web browser to open SN to hit those buttons.
Click to expand...

There is no opening a web browser on the iOS version of RS, every single step is done in RS.

no, i realize that. what i'm saying is that up until you showed us that method, i would have to go to SN in a web browser and hit some of the update buttons, usually position update even though i'm static. then i would have close and restart the RS app either on the phone or the desktop or both. before you posted the alternate way, if i hadn't had access to the desktop browser i'd have to pull up SN in an IOS browser which i've never tried. but your way works and i'm still showing active in the desktop RS app, but not in the IOS app.

there seem to be too many moving parts to this and i suspect that if all i had was the phone and i wasn't static, it wouldn't be an issue. but since i'm static it won't be a problem doing your procedure when i want to indicate that i'm actively spotting. 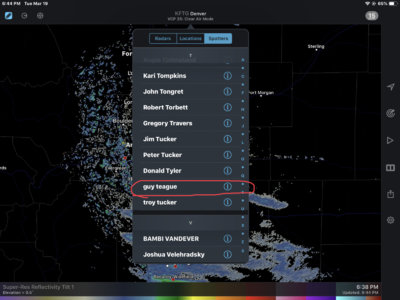 but believe me, this hack will help me tremendously. it's just i've done so much beta testing in my career that i can't help trying to work through to a solution or a root cause.

oh, and this time after i did the procedure, i kept my hands off things and the red dot came back without any intervention although i didn't time how long it took. and, as i said, it never disappeared on the desktop app.

i'm trying something. i left the RS app on iphone running as the top app. the phone goes to lockscreen after 2 minutes and i'm going to check every hour or so to see if i actually time out or not if i never let RS go to background while i run another app.

To keep RS on top and open, you can also select the "disable auto lock" which will keep your device from going to sleep and locking the screen whenever Radarscope is active and in front.
Reactions: Mark Blue

yeah, it times out if it's not open and active. but when it times out i'm still active in the desktop app although that times out later on, it just holds onto it longer. but knowing the behavior means i can workaround the issue.

Hey I'm trying to sign into radarscope with my spotter network login and it's not working. Any suggestions or help is appreciated. Thank you.

I’ve been having the same problem lately, all my settings are right on my iPhone but when I toggle it on or off my location doesn’t show up. My name doesn’t even show up in the list. I also downloaded RadarScope on my laptop, and it’s not even showing my name under SpotterNetwork. Is there a way for someone to check this out? It’s worked several times before and then I’ll go back on my app on the iPhone and my red dot is no where to be seen. As to laptop I’ve never seen my own red dot but can see others. I don’t even see my name either. I spent the $29 for RadarScope for my laptop just to report when I’m chasing and spotting and can’t do so if I’m not able to even see my own name or even a red dot. Last name is coody, no where to be found like I don’t exist

Per several posts above are you able to login to your SN account at Spotter Network This is always the first step in troubleshooting issues with SN and RS.

Mark Blue said:
Per several posts above are you able to login to your SN account at Spotter Network This is always the first step in troubleshooting issues with SN and RS.
Click to expand...

Yes I can log in on spotter network, for a little bit it fixes the issues, but then for no rhyme or reason it goofs up again, almost acting like it can’t get my gps coordinates

I just checked RS and found you rather easily. It looks like you’re NE of Ft Smith by a few miles. 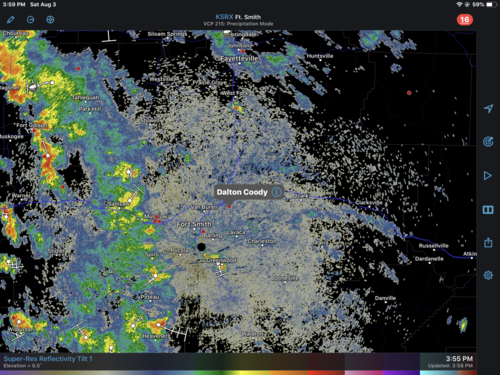 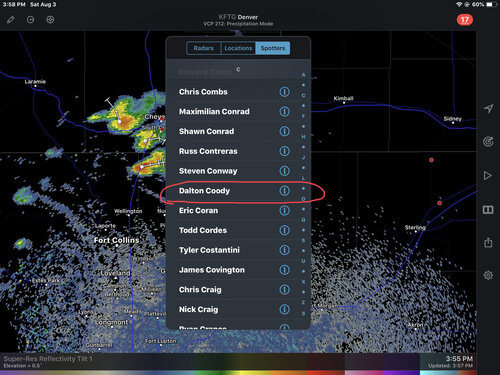 I’d recommend checking the two settings depicted below in RS and making sure you also try following the advice in this post up-thread, found on page 2, post #50.
Spotter Location 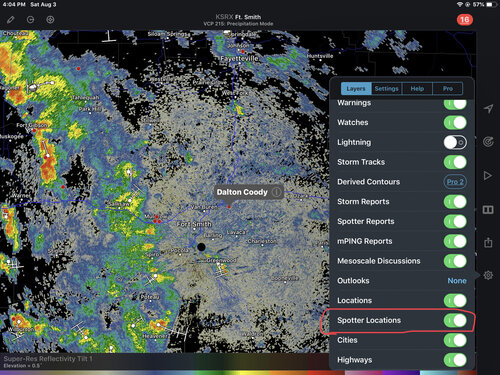 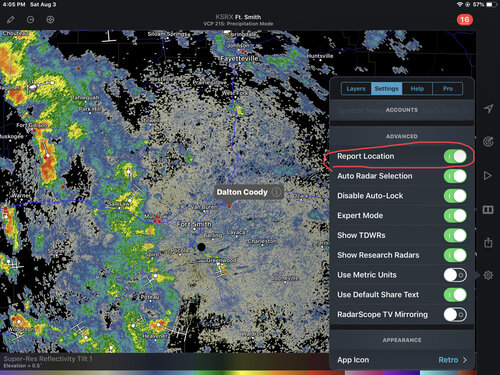