I've been going on an end-of-summer MCS stratiform lightning binge with chases to Wichita, Kansas City, Columbia, MO and Cape Girardeau, MO in the past week with varying degrees of success and failure. In Kansas City last night, I witnessed and captured an interesting event on high speed video. 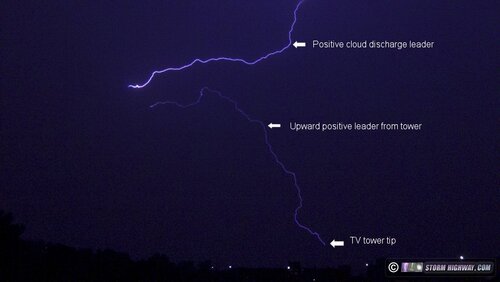 The horizontal discharge began branching after several milliseconds, several of which can be seen traversing the frame in the same direction as the main channel. 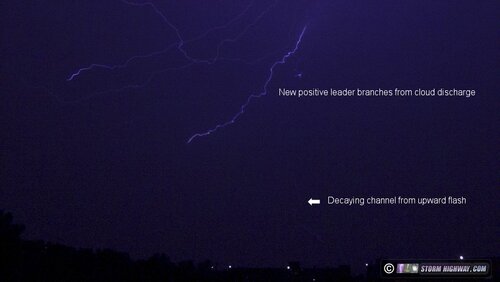 Then, one of the branches contacted the channel of the upward tower flash about halfway below cloud base, completing the circuit for a positive cloud-to-ground flash return stroke! The thunder from this was typical of positive CG (loud "sonic booming"). 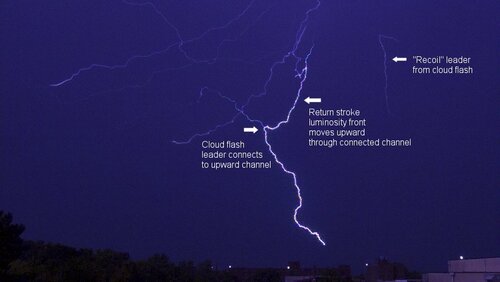 The CG return stroke, as is typical, completely overexposed: 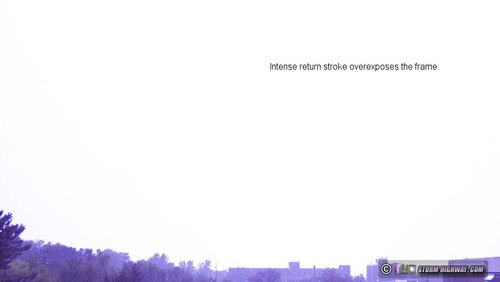 As the return stroke decayed, the completed "merged" channels are visible: 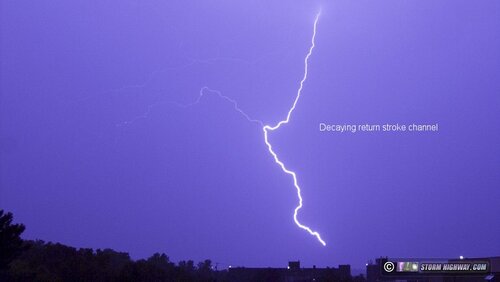 In short: a positive "anvil crawler" connected to an upward tower discharge-in-progress to complete a positive cloud-to-ground stroke. I am working on a video of this which I'll probably have to finish after Dorian is over with.
Reactions: Randy Jennings, John Farley, GPhillips and 3 others

This capture is the second clear example that I've seen of what I've dubbed the "bipolar hybrid ground flash".

The first example is 8 seconds into a video released on 5 July 2018 by Pecos Hank.


The bright pulse initially caught my attention as it seemed unusually intense for a recoil leader-induced pulse. I would then discover that this bright pulse wasn't at all caused by a recoil leader, it was caused by the upward leader connecting with its own triggering flash, something that I've never seen before.

The initial upward positive leader (UPL) is initiated by an in-cloud negative leader associated with a positive CG flash. As the UPL continues upward, we see positive leaders that are clearly not associated with the UPL. These other leaders must therefore be associated with a section of the in-cloud negative leader which has cut-off and re-polarized with a new positive end. The frames immediately before the bright pulse reveal what look to be one of these descending positive leaders slamming into the UPL. The brightness of the other positive leaders duck during this pulse and then recover, and the positive end of the UPL is seen sending current through the connection point into the cloud after the ground channel fades. This provides evidence that the bright pulse was indeed a polarity-reversal process caused by the connection of the two flashes. The polarity changes back to negative as a recoil leader negative end works its way down to the tower.

Our current understanding of bipolar lightning is still very limited. One paper from 2018 (Error - Cookies Turned Off) analyzes upward bipolar flashes with interferometers, though the polarity reversal process is clearly not caused by the attachment of an upward leader with its triggering flash. There doesn't appear to be any scientific literature discussing the attachment of upward and downward flashes.

Both yourself and Pecos Hank have described these events as being loud. This implies that the peak current is high, and these events probably cause much more heating and damage to structures than ordinary upward flashes. Another flash that I highly suspect was a bipolar hybrid ground flash impacted the Makkah Tower in Saudi Arabia in September 2018, seen 53 seconds into this video:


The thunder is extremely loud and there is no evidence of a nearby +CG flash, though the framerate isn't high enough for accurate confirmation. As you can see, this flash launches white-hot debris well over a hundred, possibly over two hundred feet into the air which is unprecedented and this event appears to have triggered other UPLs in the distance. I was really hoping I could find another angle of this flash but was unsuccessful.

Your analysis of your capture does not differ in any way from my analysis and It appears to be the second publicly-available capture of a bipolar hybrid ground flash in existence. Well done!
Reactions: GPhillips, Jeff Duda and Dan Robinson

Chris, thanks for the detailed and interesting analysis! Do you think there could be 2 "layers" of cloud discharges (negative leaders higher up, positive below following close behind)? As in, these discharges have three separate "levels" (negative highest, positive middle, positive upward lowest) any of which could connect to each other at some point in the process?

I've published the video of this event since this post, it is at the 3:15 mark at this Youtube link:

I have just finished drafting a paper on both Hank Schyma's and Dan Robinson's observations which can be read here: Both of the hybrid ground flashes that I've analyzed involve the positive crawlers and UPLs attaching to one another. I have not seen any other examples of hybrid ground flashes, therefore I can't say whether attachment of UPLs to negative leaders from a different flash is possible. I describe a scenario in my paper on how such an event could happen. It would probably involve a recoil leader negative end jumping off from one of the positive trees and making a connection with the other flash. I may have captured the connection of two separate positive trees over the summer which is shown here:
Reactions: Dan Robinson

Chris, I finally had time to go through your draft paper and wow, this is exciting stuff! The Youtube clip pretty much has the full resolution picture but if you need anything else let me know.
Reactions: Chris Kwinta

I have since been in touch with a lightning physicist who's team has made a couple observations of this type of flash in the past. Interestingly the flashes that both Dan and Hank observed have notable differences from the previous observations-- Hank's case involved a polarity reversal while current was still flowing to the tower and Dan's case had no evident recoil leader "backfeeding" that connects the two leaders together. Scientific papers on these flashes haven't been produced yet.
You must log in or register to reply here.
Share:
Facebook Twitter Reddit Email Link
Top Bottom