I just got around to posting this ... This is my chase log for hurricane Laura in SW Louisiana (especially Lake Charles). Details are below...

Summary: This area shows pictures taken from the interception and observation of extremely devastating and catastrophic category-four hurricane Laura in southwest Louisiana near Lake Charles in Calcasieu Parish, including its landfall during the night of August 26-27, 2020. This devastating storm originated as a "Cape Verde" tropical disturbance that originated off the African coast in mid August of 2020. During its long journey across the tropical Atlantic, the storm formed into a tropical depression east of the windward islands, moving quickly west. Upon approach to the US Virgin Islands, the depression became a weak tropical storm, passing by Saint Croix, then south of Puerto Rico. After that, the developing storm went directly over Hispaniola (Dominican Republic and Haiti), which would normally disrupt and dissipate cyclones due to rugged terrain.

Tropical storm Laura, surprisingly, remained intact is it passed back over water, and over its next "hurdle", eastern Cuba. Again, the storm maintained integrity over the land mass, before re-emerging over the Caribbean Sea during the day on August 24. Now over warm water is began re-organizing, struggling a final time crossing western Cuba and into the southern Gulf of Mexico late on the 24th. The storm continued west and northwest, reaching hurricane intensity during the morning of August 25. Continuing northwestwards, Hurricane Laura entered an atmospheric environment of low shear and beneath an upper-level anticyclone. Rapid, to even explosive intensification, ensued during much of the day on August 26, and the storm reached 150 MPH (less than 24 hours earlier it was 75!) as it approached SW Louisiana.

The storm made a midnight landfall near Cameron and to the east of Holly Beach, Louisiana on August 26-27 as a high-end category 4 hurricane, the first of such in that area in recorded history. The storm continued inland during the wee morning hours, crossing over Sulphur and Lake Charles in Calcasieu Parish. These areas took a direct hit from the violent right-front quadrant of the storm, and experienced the passage of the rain-free eye. The storm crossed the I-10 corridor and continued to the north, later turning towards the northeast on August 27. The storm, now inland, finally felt some vertical wind shear it managed to avoid until landfall, weakening to a category one hurricane by the afternoon of August 27 in northern Louisiana. The storm weakened further to a tropical storm over southern Arkansas during the evening of the 27th, then to a tropical depression overnight, and dissipating over central to northern Arkansas, having completed a full re-curvature.

I had already traveled out to Louisiana (from Los Angeles) on August 23, anticipating an intercept of far-weaker Marco, which encountered vertical wind shear and rapidly weakened on August 24. On August 25 I headed west, targeting a swath anywhere from Lafayette, Louisiana to Galveston, Texas as a landfall point. Late in the day on August 25, I decided a westward option, maybe near Port Arthur, would be a good choice. Lack of hotels in that area and evacuation traffic on I-10 forced me to spend the night in Houston, assessing a final target area during the morning of the 26th. I headed back east towards Port Arthur, then south of there along the coastal road (SR 82) through Holly Beach and back up SR 27 to Lake Charles. Well in advance of the storm, Holly Beach was already experiencing storm surge flooding and high surf. Staying on the coast was simply not possible with a major hurricane making landfall due to lake of shelter / low elevation.

Observations of the storm landfall and subsequent passage of the hurricane core was done in Lake Charles, which experienced a direct hit just after midnight (early on August 27th). My observations were done with a few other storm chasers, including Tim Marshall and Scott Peake, atop a reinforced parking garage (with permission from police and hospital staff) near the Christus Patrick Medical Center. The eastern edge of the storm eye also passed over, with breezy conditions and no rain, and stars briefly visible through cloud breaks overhead, surrounded by lightning. The second side of the storm was less intense than the forward-right side. I got some sleep and made my way out of Lake Charles during the morning daylight of August 27. The city of Lake Charles suffered extensive damage, with power poles and trees blocking most roads, roofs torn off buildings, homes destroyed, flooding of many roads, and debris everywhere.

I helped a few local people there, also giving them some water, then made my way back to I-210 / I-10 to head east. A barge was also noted against the bridge in Prien Lake. Farther east, near I-10, inland storm surge flooding was noted, along with a toxic chemical fire on-going. Downtown Lake Charles also had significant damage, with a radio tower collapsed and many windows blown out on the Capital One tower. I headed east on I-10 and got clear of the heaviest damage path. Unfortunately, my vehicle hit an isolated piece of metal / power insulator nearly invisible on I-10 east bound. Both passenger tires blew out, as I rolled to a stop near Iowa, Louisiana. Without cell service, I had to put the spare on the front, and slowly limp eastward towards Jennings, and distance of about 15 miles. The tire and rim were completely destroyed at this point.

From there, and after many tries, I contacted AAA and was towed to Lafayette, where I was able to exchange rental vehicles and file paperwork. With the new vehicle, I continued east to spend the night in New Orleans, changing my return from the 27 to the 28th. On August 28, I returned the rental vehicle and flew back to Los Angeles. The main chase vehicle was a 2020 Nissan Rogue, and the exchanged one was a 2020 Chevy Malibu. Total estimated mileage was about 1,000 miles for the entire trip. 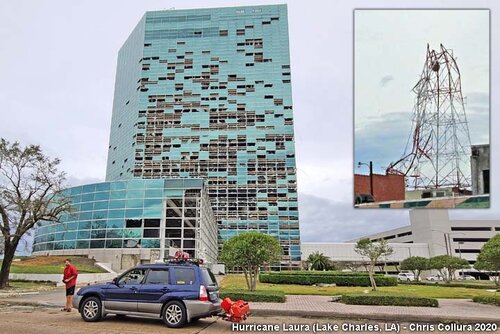 Above: The city of Lake Charles, Louisiana bore the full brunt of hurricane Laura during the night of August 26-27, 2020. In this picture, the Capital One Bank tower building has much of its windows blown out. Nearby, a TV station tower collapsed, as shown in the inset image to the upper-right. Hurricane Laura came ashore about 20 to 25 miles south near Cameron along the Louisiana coast, with 150 MPH sustained winds and a central pressure of under 940 mb, making it a strong category-4 hurricane on the Saffir-Simpson scale. The city of Lake Charles took a direct hit with the right-front quadrant of Laura's violent eyewall, entering the calmer eye, only to be lashed by the backside of the hurricane. 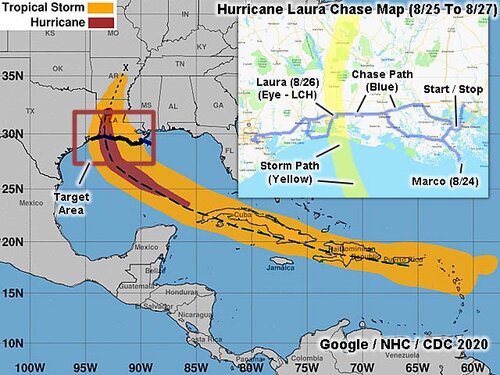 Above: This is a chase map for hurricane Laura, from August 25 to 27, 2020. In the main image, the wind swaths (from the National Hurricane Center) of tropical storm / hurricane Marco are shown across the central Gulf of Mexico, with ultimate landfall as a devastating category-4 hurricane in SW Louisiana during the night of August 26-27. The image is annotated, with the target area for the storm chase of this storm in the boxed area. The inset to the lower left shows the details of the chase / target area, mainly on August 26-27, in the Lake Charles area. The storm path is shown in yellow, and blue denotes the driving paths during the chase of hurricane Laura. The diagram does not show the flights to and from Los Angeles, California and New Orleans.

Full video of Hurricane Laura is below...

Above: Even more impressive is the GOES-16 visible satellite and radar imagery of hurricane Laura as it was approaching and making landfall in SW Louisiana. In the left image above, the impressive eye of the storm is seen, with mesovortices / low level "swirls" inside the eye. Note the pressure center displaced to the left (west side) of the eye. Catastrophic winds will be ocurring on the right and forward side of this strong category-4 hurricane. The image to the right is from the KPOE radar site (base reflectivity) at around 2 AM CDT, after the KLCH radar was destroyed. My position is the blue cross-hairs, obviously inside the eye of hurricane Laura, along with several other storm chasers (red dots). 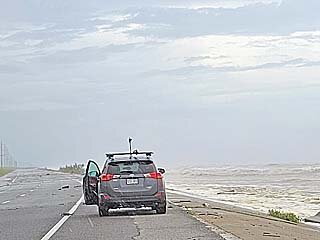 Above: Looking east on Highway 82 towards Holly Beach in SW coastal Louisiana during the early afternoon of August 26. Brian Emfinger's vehicle is in the foreground. With landfall still over 10 hours away, waves and surge area already crossing portions of the roadway. 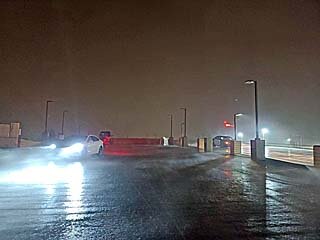 Above: Parking garage top during the late evening of August 26, near the Christus Patrick Medical Center. Several other chasers were there, including Scott Peake and Tim Marshall. This is where we rode out the full fury of the storm, in near darkness and with a deafening roar during the night. In this picture, the hurricane forced winds have just reached Lake Charles. 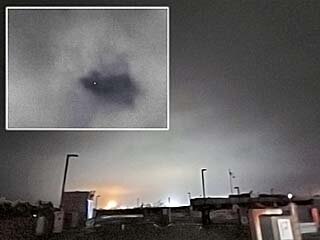 Above: During the early morning hours of August 27, part of the calmer eye passes over our location in Lake Charles. I measured a pressure of 954 mb. Some chasers a bit west near Sulphur measured 948 mb. The winds died down a lot but did not completely stop (probably because of meso-vortices on the east / right side of the eye). The rain let up completely, with partly to mostly cloudy skies and fog to the west. The inset is looking up through a break in the low clouds inside the eye, with stars briefly visible. Lightning was noted all around us at this point, with a brief glimpse of a "stadium effect" through the cloud breaks as the eyewall was illuminated. 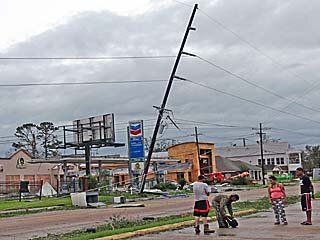 Above: Dazed and confused people wandering around the devastated south side of Lake Charles during the morning of August 27. I offered to give these folks a ride, and gave them extra food and water I had.

A FULL Report of this chase is available at the link HERE: www.sky-chaser.com/laura20.htm
Reactions: Jeff House, Andy Wehrle, Todd Lemery and 1 other person

Nice write-up, Chris. You going for Delta? May be in the same spot.

Jeff Duda said:
Lots of debate as to the legitimacy of that estimated gust. I wouldn't plan on it surviving scrutiny.
Click to expand...

What is the debate about the legitimacy of the gust ?? This wasn’t an “estimated” gust it was a “recorded” wind gust with a calibrated RM Young sensor. Please inform me since this is the first I have heard this measurement was in question ? What is your source saying this measurment is in question ?

Jeff Duda said:
Lots of debate as to the legitimacy of that estimated gust. I wouldn't plan on it surviving scrutiny.
Click to expand...

Hi Jeff, I am still waiting for your answer ? Where is the supposed "Lots of debate" ? You wouldn't plan on it to "survive the scrutiny" ?? What kind of a statement is that when you know nothing about the project ? You sound like a typical tool to me that's talks sh*% for no reason. Please enlighten me why this wind gust won't survive scrutiny ? You are spreading lies and should clarify this since you were so confident to make such a statement. I personally developed this idea and have fine tuned it over the past decade so I would love to hear what your statement about "surviving scrutiny" was all about ? Please enlighten me......
Reactions: Andy Wehrle
You must log in or register to reply here.
Share:
Facebook Twitter Reddit Email Link
Top Bottom