I was driving through the boot heel of Missouri this afternoon ~16:30 CDT and had been going through several light to moderate showers. I noticed just to the west of I-55 a dangly from the cloud that was suspiciously funnel-shaped. As I watched the funnel elongated, then started to form a corkscrew. By the time I got off the road and could get a picture, the top of the funnel had separated from the bottom. I wasn't close enough to see rotation and I never saw the condensation funnel touch the ground nor a debris cloud.
I presume this was a land spout (none of the rain in the area was associated with lightning & there were no warnings in the area). 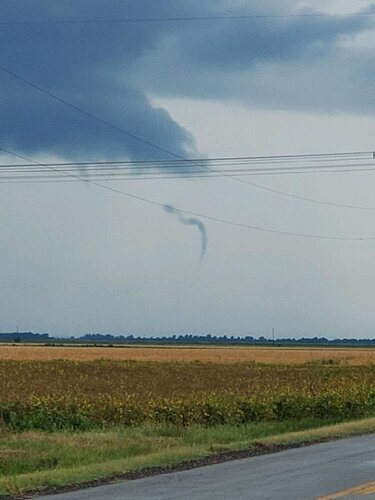 I did not report it as my understanding is these funnels don't typically reach the ground. Should I have done so? Should I report it a day later (the report would go to the Memphis office). How about reporting via Spotter Network? Would it be reportable as a funnel cloud - I don't see a category for land or water spouts.

This is the first time I've seen such a beast even though they are fairly common near my home south of Houston. Thanks
Reactions: James Wilson and Tom Dulong