Just how away far can you see a storm?

Might be a dumb question, but: How far out can you see a storm??
I know its atleast 25 miles. And I'm assuming probably around 50-ish on the far end - for an average mostly-clear day?
This comes up from a supercell off in the distance that I was watching from home Wednesday. It was pretty cleary visible (attached image is cropped to keep a smaller file & remove the clutter around it but still should geve some idea)
Thing is the only storm I saw or rarar was 74-ish miles away. I'm assuming that's probably too far to see anything much? (radar shot is ~half hour after the pic was taken showing the one storm that shows there)
I also sat out for awhile after dark & watched its lightning-show illuminating the cloud. (always loved doing that, especilly when they're closer)
Watched for ~half-hour, til the point it was pretty far out there, still visible if you looked for its flashes
When I came in, I took another look at radar..the only storm I saw there was just over 100 miles away.

Maybe I'm assuming incorrectly that 50-ish miles is is around the limit, and I remember reading in a book that it was something more under the right conditions - but I simply can't remember the number, or if they mentioned if you could really see any detail in the clouds
So maybe you could sorta see a cloud 74 miles? But clearly see?? Would it even be possible to see something 100+ miles away at night??

Based upon the curvature of the earth, you could theoretically see the top of a very tall thunderstorm (60,000 ft) from 300 miles away. However, light refraction is going minimize that distance slightly (reducing it to around 250 miles).

Realistically though, a little over 100 miles is the max to see any detail.

As far as the best time to see storms is concerned... This is more dependent upon the moisture in the air than anything else. If it's real hazy, visibility will be greatly reduced (possibly to 5 miles or less). The most extreme example of this is when you have fog, and can barely see a few yards in front of you. That said, on a clear day with no haze or smoke, the best is early morning or late evening when the sun is shining on the clouds and reflecting off of the clouds in color. The color helps contrast the cloud structure and give you a better understanding of what you're looking at. During the day, the blue sky color tends to mix into the white cloud color and blur the contours of the structure at a far distance. And at night, you can't really see anything. Unless you're talking about lightning. That you could see at 100+ miles away, but you would only be seeing cloud to cloud lighting at that distance, since the cloud to ground lighting would be below the horizon.
Reactions: Anden S

I was outside my house one day and saw one storm to my N and another to the S, so when I went inside I checked the radar. The N storm was near Imperial NE (~160 miles) and the S one was near Stratford TX (~125 miles). I live near Lamar CO.

While flying from Albuquerque to Baltimore I looked out the window and could see Pikes Peak from over Tucumcari. Yeah, of course we were probably at 25,000 feet. Also saw both the Gulf and the Atlantic (at the same time) from a plane while over Florida one time.
Reactions: Hannah.Taylor

I agree with what Bob says. Sometime you can see a storm's anvil 100-200 miles away. Growing up in KC, I'd see storms raging over Salina, KS on the radar and I could step out on the back deck and see the storm tops.

Thanks guys..
I know its real hard to judge distance just by looking at something .lol.
That storm seemed closer, probably in part because it was right in the perfect spot, and was a supercell rather than the more common general thunderstorm
(maybe being near sunset helped too...since I was looking northeast - so the sun would be shining right towards it)
It was fully dark by the time this had moved to 100+ miles away, so yep at that point I was just seeing the lightning in the cloudtops

I really had no idea just how far you could see a storm from...looks/sounds like I can in theory see something to the far SE corner of wyoming / SW corner of Nebraska on a clear day..


For me,
I'm fairly close to the mountains, so not all that far to the west that's what I see . Also seems a good place for CG lightning strikes
South is neighborhood, so limited distance
East is basically completely blocked by houses.
Being that I'm on a small hill...
North would be good, but is mostly blocked by trees in the summer
NE it the one direction I have a long unobstructed view. (happens to work nicely for storms)
Though not uncommon to have some haze - or smog from Denver, since that's also NE of me. (the air has deff been cleaner this spring though with all the Covid shutdowns)

Whoa Bob that's a nice viewing spot..parts of 3 states worth of storms!

Actually it's 5. CO, KS, OK (ph), TX, NE. One other story: One day in the early 2000's I wasn't getting radar for some reason, so from 287 at Memphis TX I turned north to go after a storm only about an hour from sunset, believing I could get there in 45 minutes or so. Nope. My nowcaster called, I asked where the storm was. Woodward. 130 miles. End of chase day.

A few nights ago I was out watching the stars in central Wyoming and saw a flash to the south. The only thunderstorm was 300 miles away near Pueblo. It was too dim for my camera to pick up.
But I did photograph lightning with the northern lights from 250 miles away last summer. At that distance it looks very orange from the scattering of light through the atmosphere. 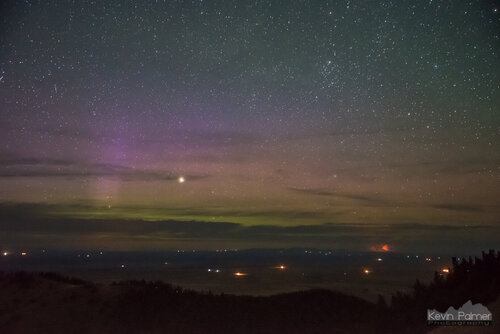 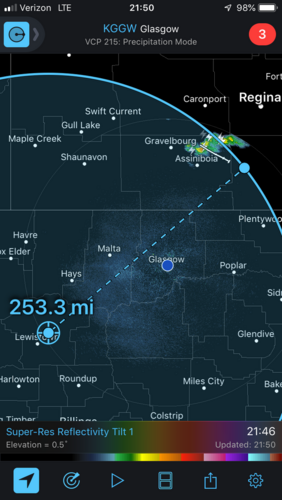 A few years ago I was near home in Minneapolis and could see the edge of the anvil from a tornadic storm north of Fargo, 200+ miles to my northwest.
Reactions: Hannah.Taylor

----
This all does make me wonder if I could see atleast the top of a large supercell well over 100 miles away. May 9, 2015; this tornado was 47 miles away... seen from the Kansas side of the KS/CO border at a tornado near Eads, Colorado.
Reactions: Matt Zumbrunn

@Tony Laubach:
Nice pic! Just curious...is that using zoom, or simply as you see would it?
I plan to stay a good safe distance away from storms (not sure what that distance is yet - close enough that I can atleast see something, but far enough that there's little risk of getting hit by the tornado or hail. Have a feeling the distance will be better determinable once I've actually been out. Plus based on the roads & storm conditions itself.)


-------------------
I went out on the roof late night a few nights ago, to see if I could zoom the camera in & see anything with it on the stuff that was going on down in Denver. (couldn't I'm simply too far from the city to see any small details like that)
But while up there I could clearly see lightning in the clouds (no camera needed) way off in the distance. Checked radar when I came in, there were 2 storms in the general direction I was looking, one 114 miles away, the other 124 miles. Pretty sure it was the closer one but its possible I saw both. So even though it wasn't what I originally went to look for(didn't even know there were any storms running) I pretty much proved to myself that I can see atleast the cloudtops from over 100 miles. I'll have to keep that in mind when seeing night storms off in that direction on radar...
I'm actually kinda curious now on just how far my limit is

Plus I hope to one day see some sprites, but I'm not sure what that takes..

James K said:
@Tony Laubach:
Nice pic! Just curious...is that using zoom, or simply as you see would it?
Click to expand...

The picture is at full zoom, but we could clearly see it as we were driving westbound. In fact, it took us a moment or two to actually decide whether it was a tornado or not because we were looking at our position on the radar verses where that storm was and had to convince ourselves that we could indeed see it that far away.
You must log in or register to reply here.
Share:
Facebook Twitter Reddit Email Link
Top Bottom