Good day all, This is my chase report on hurricane Nicole.

Storm Summary: Hurricane Nicole was a late season (and rare November) hurricane to affect the eastern coast of Florida during the second week of November, especially on November 9 and 10. The storm began with a large low pressure system, or "gyre", extending from the eastern Caribbean and eventually the western north Atlantic (well east of the Bahamas and south of Bermuda) from November 4 to 6. By November 7, subtropical cyclogenesis ensued and the system moved generally west, and even southwest (rare for November). A day later the storm evolved into a folly tropical system, and continued west towards the Bahamas, intensifying gradually. As a strong tropical storm, Nicole crossed the island of Abaco early on November 9, then passed near Grand Bahama. The storm continued west, and eventually turned northwest, becoming a minimal hurricane late in the period on November 9. Nicole had a large and expansive gale envelope of tropical storm forced winds. This area extended well to the east and northeast of the center, and drove a powerful fetch of strong winds over the swell window for eastern Florida. Extremely high surf, and storm surge - Coinciding with a near full moon and king tide - Seriously affected the coastal areas in eastern Florida, with buildings collapsing along the coast, especially in Daytona Beach and New Smyrna Beach, far from the storm center. The storm continued to the west-northwest, making landfall as a category 1 hurricane on Hutchinson Island, Florida at roughly 7:30z (2:30 AM local EST) on November 10. The storm continued to the northwest, and weakened to a tropical storm as it crossed Florida and briefly reached the Gulf of Mexico near Cedar Key late on November 10. The storm continued northwest, approaching the NW Florida and GA border late in the period from November 10-11. On November 11, the storm weakened to a tropical depression over SW Georgia, and continued north across the SE USA as a remnant / post-tropical low there-after. Hurricane Nicole has a lowest pressure of 980 MB (mainly at the Florida landfall point), winds gusting over 75 MPH, almost 500 million dollars in damage, and caused 11 deaths. It has been quite some time since a hurricane, in the month of November, affected the United States - Especially Florida (the last November hurricane affect Florida was Hurricane "Kate" in November 1985).

Storm Chasing Details: Nov 9-11, OVERNIGHT – Interception and core penetration of a category 1 hurricane (named "Nicole") from Martin County, Florida and northward to Indian River Count. This was mainly along US 1 and A1A past St Lucie County and finally between Vero Beach and Fort Pierce, where the eye of the hurricane was penetrated. Damage observed was mostly to trees, powerlines, and some signs. The storm caused most damage along the coastline, from exceptionally large waves and storm surge, especially north of where the center of the hurricane came in (esp Daytona Beach). Winds gusting near 75 MPH were observed, with very heavy rains. The calm eye was also penetrated on Hutchinson Island, with clear to partly cloudy skies, dead calm winds, and the moon and stars overhead. A pressure just under 983 mb was measured in the pressure-center of the eye. Documentation was digital stills, audio, and HD video. A 2022 Jeep Renegade was used to chase the hurricane. Total mileage logged was 273 miles. A storm surge warning and hurricane warning were in effect most of the night. 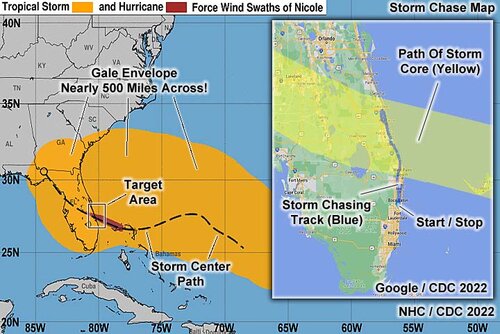 Above: The image above is a composite graphic using maps from the National Hurricane Center and NOAA as well as a map of the eastern Florida coast in the right inset image. The NHC map shows the winds swaths of tropical storm and hurricane forced winds, in orange and red, respectively with a storm track overlay as a hashed path. In the right inset, the chase (driving) paths appear in blue, from Deerfield Beach, to and from the target-area (mainly Indian River County in east-central Florida near Jupiter and Hutchinson Islands), with the path of the storm core (eyewall and eye) depicted by the yellow swath. The total driving distance logged was 273 miles. 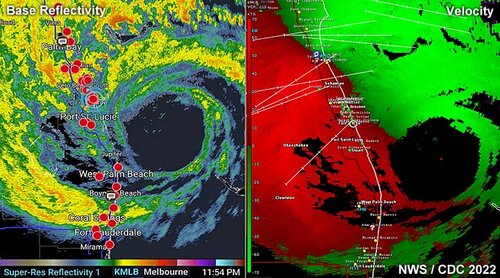 Above: This is a radar image composite (base reflectivity is to the left, and Doppler velocity to the right) from Melbourne (KMLB) from just before 12 AM EST as the eye of hurricane Nicole was southeast of Hutchinson Island, Florida on November 9-10, 2022. The blue cross-hairs to the left (and white circle to the right image) is my position in the target on the Florida East Coast. Note in the Doppler velocity image on the right, strong winds (bright colors) occur just north of the eye, and in a much larger area farther out and to the north. 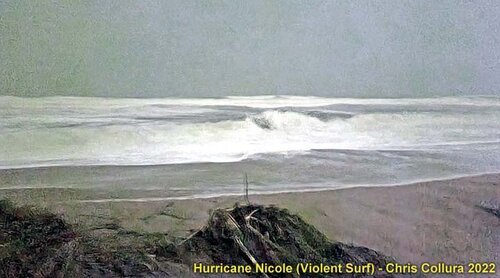 Above: In the picture above, shot in darkness and with moonlight providing enough light to make this image, violent surf can be seen lashing at Jensen Beach, Florida, during the late night of November 9, 2022. The ocean is basically white-water all the way to the horizon. Hurricane Nicole generated tremendous waves, causing extensive flooding and coastal damage along a path extending from northeastern Florida to as far south as Miami. 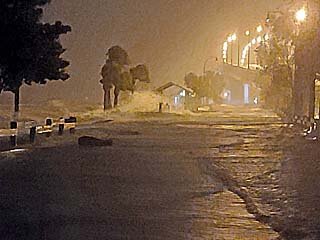 Above: Storm surge covering the service road on the north side of the Jensen Beach Causeway. 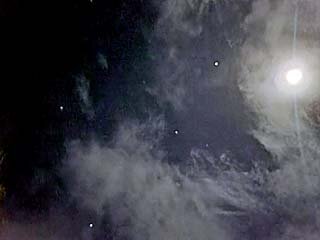 Above: View of the moon inside the calm eye of hurricane Nicole. 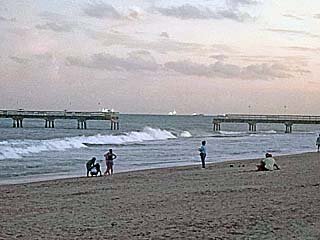 Above: Damage to the Commercial Fishing Pier near Lauderdale By The Sea, Florida, late in the day on November 10. Coastal damage and flooding extended along nearly the entire Florida east coast.
Reactions: Mark Gressman Jr, Robert Payne and Cameron E.