Victims of Hurricane Matthew mount up in the Caribbean...

Areas of the island nation on the Western tip are still cut off from the mainland as storm damage assessment teams scout Hurricane Matthews ground zero landfall zone...

Hundreds of survivors continue to show up for medical and resource needs...

Few reports coming out of the Bahamas...

The Bahamas weren't spared the powerful winds of Hurricane Matthew...

Jacksonville Florida WJAX on air live feed cam's... Some video cam's are down due to power outages...

Parts of Jacksonville Beach have been breached due to the Storm Surge flow... Parts of the road along A1A in North Florida have fallen into the ocean due to shore erosion from Matthew...

There is a pretty decent surge threat to Savannah and Charleston at this time. That angle of approach is more direct than any of these other US locations, and the storm's central pressure is not significantly weakening at this time. I see a pretty good chance at 10 feet of surge in some of those south facing bays...
Reactions: Kevin R Burgess

I think some serious work needs to be done to the 72 hour models' equations, or maybe we need way more data points to input, or both. But none of the models have handled this hurricane well after the northward turn (which was well forecasted by them). After passing through the bahamas, the models' output for 72 hours has changed every time, east or west in the track. I live in Wayne co. NC and now they are forecasting wind gusts to 55mph and up to 10" of rain (likely power outages/flooding/problems), while last night at 11pm the forecast track showed my area getting light winds and only a few inches of rain

If hurricane forecasting was easy we'd all do it The issue is that a 20 mile drift changes things from "fairly bad" to "catastrophic." Forecasting ANY weather feature to +/- 20 miles at 48 hours out is IMPOSSIBLE. Not hard, or really hard, or extremely hard - impossible. Until the laws of physics change to make things easier for us, things like that will happen.

There's a curfew in Savannah and right now Matthew is still moving almost due north. The tornado threat might increase a little since it'll be south of the coast rather than being just east.

The HRRR shows the center of Matthew landfalling northeast of Charleston. However, the center might be a little unpredictable.


The Sea Islands are pretty much on their own as most if not all of the bridges and causeways off the islands are shut down.

I was on Hilton Head Island's most southeastern point over a month ago in the beginning of September chasing Hermine thru Georgia and S. Carolina...

I can attest that whole area is under water at this moment in time...

The area is nothing but tidal flats and low lying island chains in the entire vicinity of Hilton Head Island and Charleston S.C. 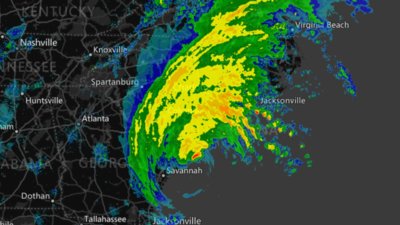 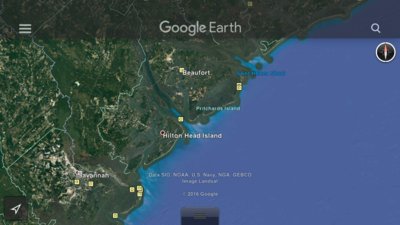 Just because pronouncing the HRRR model makes it sound like "hurr" does not mean it has any value in a hurricane. #Hint - it doesn't. It has predicted landfall multiples times from central Florida through SC all through this event. I see no value in it at all.

Can we finally say Matthew has made landfall ? 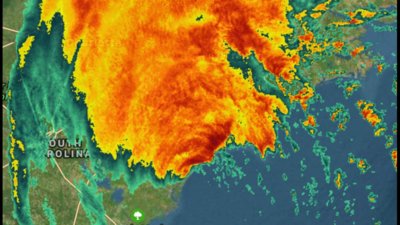 I'll be honest and admit I was nervous as hell Wednesday night looking at this storm barreling down on us...

Like a mile wide EF5 tornado you can't escape away from until it turns the other direction...

Just thinking about going thru another possible CAT 5 storm was mind numbing...

Been there done that and almost paid the piper with my life...

The Massive flooding continues along with storm Surge damage clean-up along the east coast of the United States from Hurricane Matthew... 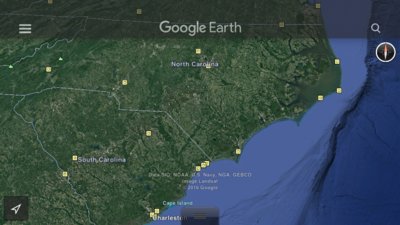 Incredibly 1 week after Hurricane Matthew made landfall... The flooding continues to be a problem in the Carolinas from the excessive rainfall and storm surge...

Super late post. I know ... But better late than never. Below are the full details on my chase of hurricane Matthew's brush with the east-central coast of Florida.

Summary: This area shows the interception of Hurricane Matthew in the Cocoa Brach / Cape Canaveral area of the Florida "Space Coast" from October 6 to October 7, 2016. The storm western eyewall passed near or over this area, with winds gusting over 100 MPH during the night. Matthew began as a tropical wave that originated off the coast of Africa, and moved across the Atlantic basin. The storm turned north, passing east of Jamaica, and severely impacting SW Haiti and the tip of eastern Cuba with devastation and loss of life as a category 4 storm. While over the open Caribbean sea, the storm reached 160 MPH (category 5), making it the first storm of that intensity since 2007. After hitting Cuba, the storm re-emerged over the Bahamas and continued NW and eventually northward, brushing the FL east coast as a category 3 / 4 storm, and making landfall in south Carolina as a weaker (category 1) hurricane during the morning of October 8. The main interception was done overnight on October 6-7 near and south of Port Canaveral. 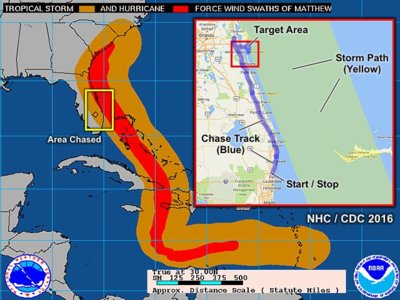 This is the chase map for the interception of hurricane Matthew's closest approach to the Cocoa Beach / Port Canaveral area on the Florida East coast. The image shows the storm path through the Carribean and into the USA, courtesy of the National Hurricane Center (wind swath product). The inset shows the section of the coastline where the interception of Matthew's CPA was executed on October 6-7, 2016. Chaser / met student Derek Sibley also accompanied me on this chase as well. 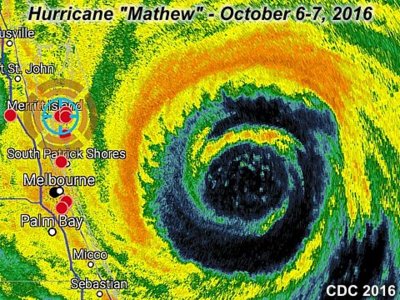 The radar (base reflectivity from early morning of October 7, 2016) image above shows hurricane Matthew passing near the east coast of Florida. Note the concentric "double" eyewalls! Although winds gusted near (and sometimes over) 100 MPH from Cape Canaveral to Cocoa Beach, this could have been much worse, had the main core, or right side of the storm came ashore. The marker to the upper left is my position awaiting the western eyewall to impinge on my location. The space between the concentric eyewalls is known as a "moat".

Video of Matthew is below... 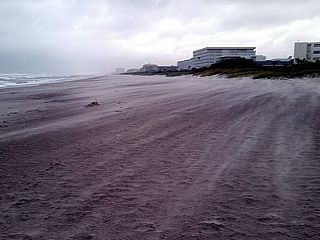 Above: Sand blowing on Cocoa Beach, FL as the storm approaches on Oct 6, 2016. 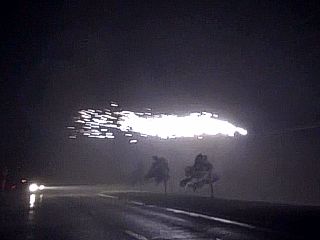 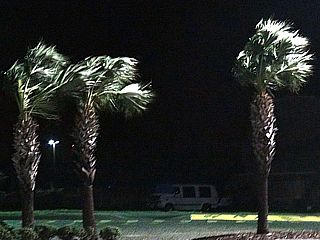 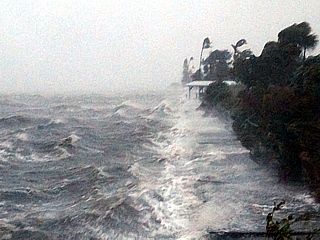