I know there are several storm chasers who enjoy shooting the northern lights as well, so feel free to post your pictures to this thread.

NOAA was predicting a strong geomagnetic storm at the beginning of the week after the sun shot off multiple CME's towards earth. They refined the forecast a couple times, but they eventually said it would hit Monday the 22nd and they were correct. Monday was also the day Illinois had a tornado outbreak. I thought if I was very lucky I might see both a tornado and northern lights in the same day. But with storms forming late in the evening and further south than originally predicted, I realized I could not see both. I waited around near Princeton and at 4:30 headed north to Wisconsin to escape the clouds. At that point seeing the northern lights seemed like more of a certainty than seeing a tornado. It was frustrating watching tornadoes on radar move through the same spot I was hours earlier. But it was worth missing out on that to see the best aurora display I have ever seen. It felt like I was in Alaska. I never knew the northern lights could move and change so fast. The aurora was pulsating like a flame and at times rose up and covered most of the sky. Clouds cleared out just in time to see the most intense part of the show. Lightning flashed to the southeast from the Coal City thunderstorm 150 miles away. After the aurora began to wane, an extremely bright display of airglow occurred. It was the first time I've seen it with the naked eye. I believe the strong display was caused by gravity waves from the earlier severe thunderstorms in Illinois. In my time lapse you can see the waves moving from south to north.

These pictures were taken from a lookout tower at Blue Mound State Park, the highest point in Southern Wisconsin.

Once in a Lifetime by Kevin Palmer, on Flickr

Very nice! Combination aurora/airglow shots can make for quite the composition. I shot up to Cheyenne, WY hoping to get out of the smoke/haze. I could see rays on my camera right away and knew there was big potential. 30 minutes later the sky exploded:

These are beautiful. They were even seen as far south as arizona. I don't have any myself, but Jeremy Perez managed to get a few nice shots. Obviously not as intense, but amazing nonetheless

@kevin-palmer and @James Hammett those are spectacular images! And Kevin, that rippled airglow shot is stunning all on its own.

What I managed from Arizona was definitely of the bird-f@rt variety, but still something I've been after for years & finally caught a break.

After seeing reports of people in Kansas catching glimpses, I made a 25 minute drive north of town to darker skies and an area with a pretty good north horizon. I started shooting time lapse and did some nightscape light painting to hopefully get something interesting even if the aurora didn't show. I wound up with some decent whisps of red and green airglow (nothing like that shot, Kevin!).

I decided to call it quits about 1:30 AM (0830Z) and headed home. About 15 minutes into the drive, I noticed the sky outside to the north was taking on a twilight appearance. I found the first place I could pull over, attached a window mount and snagged a couple exposures—sure enough reds and pinks behind all the trees and hills.

So I swung back around to get back to my good north horizon while missing the brightest part of the display. I did catch a bit of the remainders behind the taunting clouds.

Chris Shur runs an all-sky camera from Payson, Arizona, and caught some good stuff earlier in the evening before I headed out—I think he missed the later display due to cloud cover: http://www.schursastrophotography.com/latest87.html
Reactions: GPhillips

Early yesterday morning a geomagnetic storm brought the northern lights to central Illinois again. But bright moonlight and ground fog hid most of the show.

Also here's a shot taken a couple weeks ago from Brockway Mountain in Michigan. If you want to see the aurora without leaving the continental US then you can't do better than the Copper Harbor area. There wasn't even a geomagnetic storm this night but the aurora was out regardless.

I have recently been re-editing quite a few of my older photographs. I managed to find my folder that contained the small collection of the aurora borealis pictures I do have. Nothing terribly impressive, considering what some people get way up north, but these were all taken here in Northern Illinois over the past several years. I hope one of these days to be able to afford a trip way up north to capture photos that I could only dream of right now! Anyway here are a few of the ones I've gotten done so far. Enjoy.

Same night as the OP is referring to. These were taken not long after midnight on June 23rd, 2015 from north of Alda, NE (41N)
Best I've ever captured, and looked much more like displays typical from hundreds of miles to the north. In the vertical photo, the two bright stars in the upper left are Merak and Dubhe (the Big Dipper is handle up in the NNW). That's how high off the horizon this display got.

There have been quite a few geomagnetic storms of late. It's been a very cloudy spring here in Wyoming, so I missed most of them. But I finally had perfectly clear weather on Wednesday night coinciding with a G2 geomagnetic storm. 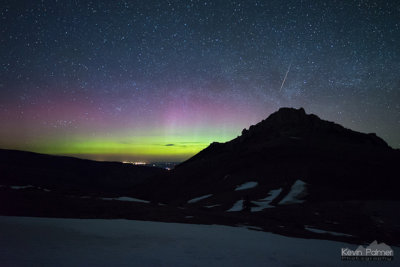 Dawn of the North by Kevin Palmer, on Flickr 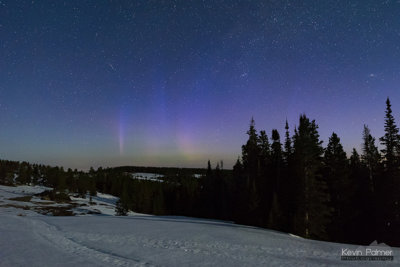