Weather permitting, should be a good show this year. Possibly even two nights. Get out there on the evening of the 13th and see what you can see. With a nearly new moon, lots of meteors should be visible.

I'm pretty stoked about this one! I plan to head up to Berthoud Pass or just shy of Guanella Pass to try to get some good shots of these. No more wildfire smoke to kill off the visibility. Just gotta hope for good sky conditions.

I'll be doing my usual setup, camped out in the backyard with a couple beers and an electric blanket. I have a pretty unobstructed eastern view of the sky, although for the Perseids this year I had more success looking southwest. Fingers crossed for clear skies...December in Colorado is a craps shoot. Seem like every show start cloudy and clears up late.

I googled on this one..what I found said the best thing to do is lay down & look straight up, rather than in a particular direction. (same thing on more than one site). That wouldn't be to bad, might actually see something at home, unlike that one in the summer where I was trying to look NE or N (whatever it was) towards city lights .lol.
Too bad this is in the winter, its just too cold at night to go out there & watch...

I wear thermals and use an electric blanket for Geminids. Layers are key and an outside heat source that doesn't emit light helps tremendously. If I have to go inside for anything, I'm sure to shield my eyes so I don't lose another 20 mins to readjusting.

It being so mild and dry lately, I predict our first major winter storm will start on the 13th in 2020 fashion.

Don't own an electric blanket, but I'd deff wear thermals!
When thinking about the shower & how cold it'd be... the thought of "I could wrap myself in Christmas lights, then I'd look like part of the display" came to mind since I'd be watching from the roof. (could just picture that, then the ones I'm wearing get tangled up with those that are spread allover the roof...and it'd be a scene sliding down the roof - sorta like the guy in that Christmas Vacation movie) .LOL.

The backyard sadly isn't too great for skywatching with the trees & house blocking so much of the view (not to mention its covered with ice/snow). Though I haven't gone out & tried looking... its deff got more 'open sky' now - after that spring derecho we had took down a large tree.

The good news is the G(E)FS is showing a departing trough early in the weekend, so conditions in Colorado/High Plains should at least feature calm weather. Friday and Saturday night, in particular, look to feature fairly clear skies. Sunday night...might be seeing the next trough encroaching on the Rockies, so clouds might come into play.

I think the timing of that trough - either one actually (and if a closed-low shears off) will be the key factor here.

I'll likely be out Saturday night as a just in case. For the Perseids I think I ended up out 4 nights as I took that whole week off as a mini vacation from work. Geminids are usually good enough to get a few days before and after the peak. Thanks for the weather update @Jeff Duda .
Reactions: Jeff Duda

Looks like the forecast cloud cover this weekend on the high plains has really soured. The initial trough looks to put a lot of clouds in the Denver area Friday night. Then a quick-hitting second impulse follows the longwave trough immediately on Saturday, thus providing likely cloud cover during the evening. Sunday looks to be okay for now, but the window is not large, and it could close in as yet another impulse moves across the southwest US late on Sunday. If it gets east early, it may again hose the show.

Yeah I've been watching things develop. Even if the cloud cover holds off, it may be challenging with the low temperatures. I can deal with cold (although I hate it), but if its below 20 my beer will freeze.

My general approach is; if I see one, it was a good show. Same way I approach lightning.

Marc R. O'Leary said:
Yeah I've been watching things develop. Even if the cloud cover holds off, it may be challenging with the low temperatures. I can deal with cold (although I hate it), but if its below 20 my beer will freeze.

My general approach is; if I see one, it was a good show. Same way I approach lightning.
Click to expand...

*NOTE: for those who take that line seriously, know that I am joking and do not advocate having an open alcohol container in your car...EVER*
Reactions: Marc R. O'Leary

Well forecast be damned, successful Geminids! Saw a beautiful second+ long long-tracker on my way home tonight. Not a fireball but pretty nonetheless. Fingers still crossed for the peak weather but I'll call 2020 Gems a win.

I saw a similar one (same one?). I went out to look for aurora (fail) but decided to try a little astro-photography since it was a nice moonless night. Of course the meteor occurred while I was not shooting, but it was nice to see.

Maybe John...id guess this was between 8 and 8:30 last night. ENE of Metro for me. Had a downward trajectory towards the eastern horizon.
Reactions: John Farley

Last night I did go out briefly to see if there was any chance of seeing northern lights. Same as John Farley - fail, but in this case because there was a patch of cloudiness north of me....but pretty sure the glow from the city lights in that direction would have obliterated anything even if it had been there? Zero chance of seeing anything tonight as its fully cloudy(no snow yet).

Seeing clouds clearing late evening after the snow yesterday, I zoomed out to far eastern Arapahoe County, settling a mile or two south of U.S. 36 northeast of Deer Trail. It was creepy enough being out there after a fresh snow; not only was it cold as balls, but there was spotty freezing fog competing with the occasional cloud decks east of Denver, and I oftentimes could not discern sky from ground where I was, so I wasn't always sure what I was looking at. Somehow I managed to get about an hour or so of nearly pristine clear skies with little fog, but a nearby power line was almost constantly snapping and buzzing behind me.

I saw probably 30 or so Geminids in around an hour, and I was impressed by their angular coverage in the sky -- I saw them in all quadrants except straight west. They also literally seemed to be radiating from Gemini, which, even though that's how most meteor showers work and get their name, I almost never can discern from what I see. Not the case here. What did not impress me was the lack of bigger/brighter ones. Some of them I could barely see even when looking right at them in the rural darkness.

Even though I had my shutter open and pointed in the direction of several that I could see with my feeble human eyes, I found very few showed up in my shots. Not sure what is going on here...as they looked plenty bright to me, but they show up quite dim from a Nikon D750, which seems at odds with what I see in others' photos. Are those other photos enhanced in some special way? Are they fireballs instead? 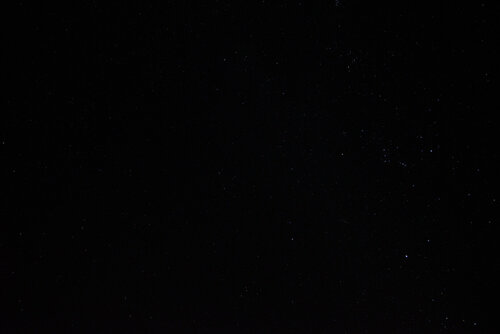 This one (left center) looked quite big to me at the time, but looks pathetic on camera: 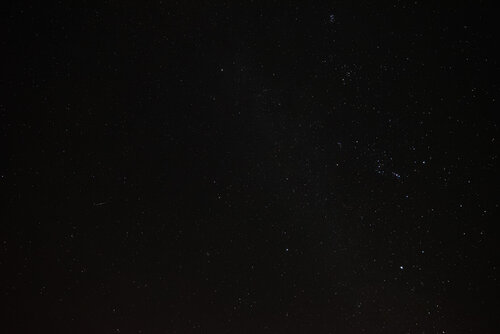 Ultimately I had as good a time photographing wintertime constellations as I did seeing meteors. After about 60 minutes in the 10 F cold, (even with apparel and taking 5-10 minute breaks in my car pumping the heat) I had had enough by 12:30 or so, especially as a fresh cloud bank started encroaching from the east. 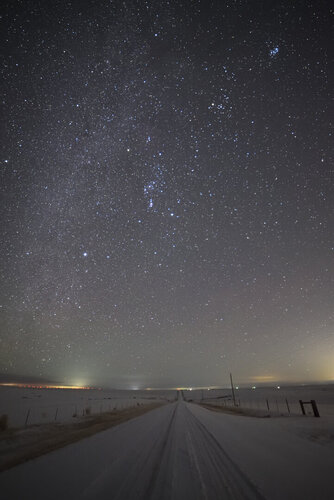 I may try again tomorrow to catch the peak night in the hopes of more activity. However, the cloud cover situation in NE CO continues to look iffy. Might have to hope for a break in the cloud streets as the most recent CAM forecasts are indicating.
Reactions: JeremyS, Michael Norris and Jeremy Perez

Thin cloud layer has settled in. Saw a couple before. Will try again shortly. This doesn't surprise me.

I looked out just a bit ago. Some scattered clouds in my area, but its what I'd term as mostly clear (in that respect it'd be a fairly decent night).
Too bad looking through a window wouldn't work .lol. its too cold for me out there in the yard where I'd have a little better view. (but that said, I'm just too tired to stay up much later anyway...)

Jeff, that snowy road nightscape is beautiful! How long were the meteor exposures? I try to stay around 4-8 seconds to let the meteor own more brightness vs. surrounding sky & crank ISO somewhat obscenely to compensate. You may be doing similar, but I'm not familiar with D750. Looks like you have great sky conditions there. I noted similar to you that these were mostly pretty faint, at least compared to decent Perseids.

The cloud threat in northern Arizona for Sunday night/Monday morning looked really bad, so I made a run on it Saturday night/Monday morning. This image includes 68 Geminids and 10 sporadic/other meteors from midnight to 2AM, just west of Sunset Crater looking across Bonito Park. Tons of airglow on the left, Flagstaff light dome on the right and some Winter Milky Way to split them up. 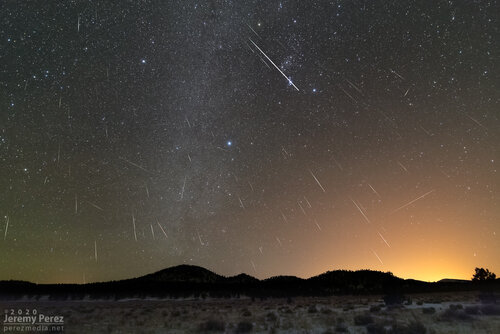 Jeremy Perez said:
Jeff, that snowy road nightscape is beautiful! How long were the meteor exposures? I try to stay around 4-8 seconds to let the meteor own more brightness vs. surrounding sky & crank ISO somewhat obscenely to compensate. You may be doing similar, but I'm not familiar with D750. Looks like you have great sky conditions there. I noted similar to you that these were mostly pretty faint, at least compared to decent Perseids.
Click to expand...

Thank you for the compliment and comments. I was shooting with medium ISOs...5000-8000 for most of the time, although later in the shoot I decided to drop down to 3000 or below to get more star trails in. Do you use high-ISO noise reduction? I have tried it before, but I found it doesn't seem to improve much on my camera unless I'm at ridiculously high ISOs, like 12000+, and even then it almost seems to create noise on a different scale to compensate for what it removes (as in, the pictures start to have a look as if they are highly compressed JPGs or just look unnatural). Regardless, it looks like the Geminids in my shots aren't too terribly different looking from what you have, so it may just be that Geminids are on the fainter side.

I tried shooting Perseids from Berthoud Pass (>11,000 ft) back in August, but the developing wildfires in W CO and some sporadic clouds made that night of shooting less than rewarding. Some that I did see looked brighter, though.

I haven't tried anything in-camera for noise reduction. I'd probably find it doing annoying things like you noted. Noise is definitely heavy at ISO 12,800 on the 6D Mark II, but it's natural & even and responds well to stacking or post-processing noise reduction.
You must log in or register to reply here.
Share:
Facebook Twitter Reddit Email Link
Top Bottom