I had a fascinating conversation on the StormTrack Discord regarding elevated vs. surface-based convection. With the permission of the involved parties I wanted to clear up some misconceptions and provide an example of a supercell going from near-surface elevated to truly surface based. This is a pretty important thing to get right in the field because correctly diagnosing a supercell's status is key to telling you whether or not it's possible to produce tornadoes. There is a related discussion to be had about landspouts but for right now I want to focus on classic supercellular tornado potential.1

Chris (Eastern WI)Last Wednesday at 8:11 PM
Dumb question, can an elevated thunderstorm develop above a CIN layer?
...
Jacob Hernandez (OKC, OK)Last Wednesday at 8:12 PM
That's what an elevated thunderstorm is
...
Thomas Mattek(Columbia, MO)Yesterday at 3:11 PM
Also re: elevated vs. surface based storms, a storm that is truly elevated is inherently incapable of producing tornadoes. Tornadoes are a surface phenomenon. If a storm is only drawing parcels from air above the stable layer then by definition a tornado cannot form because vortices[sic] will not make contact with the ground.
....
Austin Cole (Ludington, MI)Yesterday at 5:40 PM
90% or more elevated supercells[sic] draw parcells from the surface. their just stable, though, so they fall back down quickly, snubbing any actual tor threat as the air really does not want to keep going up. some will still be forced up, at least a little ways, but the driving air that actually fuels the updraft and wants to rise comes from aloft. at least, that's how i've[sic] always understood it. i don't think you can have a supercell that doesn't lift at least some surface based air. that why they look so flow-y and sculpted, the air falls again pretty quickly after entering the storm, re-evaporating some water and sculpting the base beneath the main inflow layer.
Click to expand...

What follows is an edited version of my response:


What this posts describes is what happens in the presence of an RFD, evaporative cooling with less saturated air shaping the base. Elevated supercells don't have an RFD by definition.If you see a truly elevated cell in the wide their base is completely flat, like slate gray concrete. There is no way for it to draw stable air in because those parcels are going to stop rising the moment they hit the stable layer. The sculpting you're describing happens as a result of laminar flow when stable air is forced upwards by pressure perturbation. A cell can be "high-based," elevated with the cloud base very high up (2000+ meters) or it can be very close to the surface but still elevated-what matters is whether or not the air originates directly from near the ground. The key is observing cloud quality: smooth vs jagged, laminar vs turbulent.

When you're out in the field you can see it happen. The La Juanata->Cheyenne Wells last year supercell transitioned from elevated to surface based early on in its lifecycle and made that transition several times. However,I don’t have any consistent footage from that so instead I’m going to use segments from Skip Talbot’s Bowdle timelaspe to illustrate a supercell going from a flat stable base in its first cycle and becoming surface-based in its second.

See how featureless the base is there?
And again here.

The cell is extremely powerful and physically low to the ground, but its rain free base is almost completely featureless.

Now look at the first RFD punch, where a “half assed attempt at tornadogenesis” creates a lowering and some bubbles of turbulent cloud below it. Because of the RFD the storm is now drawing in some surface parcels. That's what it looks like when a storm is first trying to develop a low-level meso, like what happened on 5/26. Or its turbulent portion can fade away as it becomes elevated, which happened to me on 5/22 when a supercell near Lawton developed a wall-cloud for a single cycle before running into subsidence south of Chikasha. Within 15 minutes it went from having a very developed, rapidly rotating to surface based feature to being elevated so far off the ground that surface winds were essentially gone. These transitions can happen very rapidly, and there is often an in-between phase where a storm first punches through to the surface and begins drawing in unstable air. Formation of the wall cloud is a very good indicator that a storm has made this transition.

Back to Bowdle. Once the tail cloud forms, you start to see much more turbulent air being drawn in.

As mentioned in the commentary the rain-cooled air is a big part of it.The downdraft/updraft interface has now cooled the near-surface warm stable air to equal its environment, allowing unstable surface air to flood into the updraft. The supercell has now “drilled down” and transitioned from elevated to establishing a surface-based, low-level mesocyclone.

Back to my first and most important point-you cannot have a traditional supercellular tornado in an elevated storm. The moment a tornado makes contact with the cloud base, it means that it has connected to some low-pressure aloft and is bringing warm, moist, unstable surface air into the cloud. In dramatic cases like Jarrell, the tornado may be the only updraft in the entire storm connecting through the stable layer, but in the vast majority of cases the supercell needs to either break the cap through rain-cooling or move into an uncapped environment.

EDIT 2: It's also important to note that, because many classic supercells form in enviornments with modest CIN, it's very common to see a sculpted base which is influenced by stable air at the edges while still producing tornadoes. Last year's event in Dora, New Mexico is a fantastic example of a significant tornado beneath an inversion-sculpted base(Pic courtesy of Will Everett): 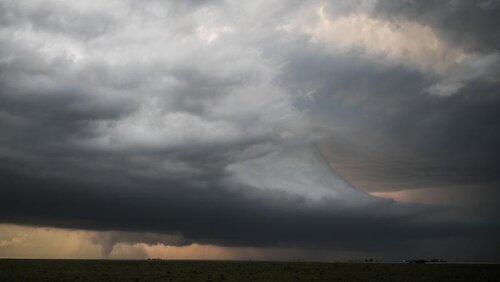 Interesting discussion/post - I guess the key here is 'near-surface elevated' as opposed to what one might traditionally call 'elevated'...the latter is more typical north of a warm front, above a rather sizeable CIN layer...such storms will have a very hard time becoming surface-based...it may well be the case that many supercells have slightly elevated charateristics ahead of rear-flank and forward-flank precip cores lowering the LCLs and providing some cooler, higher-RH air to be ingested into the storm.
Reactions: Thomas Mattek

I do think near-surface elevated is something seen a lot. Many times they do osscillate between surface based and NSE but many have trouble actually breaching to become surface based.
You must log in or register to reply here.
Share:
Facebook Twitter Reddit Email Link
Top Bottom