A member of my radio club bought one of the best Minelab metal detectors around 10 years ago and never had time to use it . It sat in it's box untouched in his garage until I came along and bought it for a grand sum of $100. I got the deal of the century on this discovery!.
After the purchase I did some research on treasure hunting and gold prospecting and the role the weather has on both. The more I read the more I became interested.
I learned that while a lot of people look at the ENSO as problematic for a cause of unusual weather events around the country, others look at it as a golden opportunity. Water moves gold and soon as the experts believe , the desert southwest will soon be drowning in color. It is estimated that millions of dollars in nuggets will be washed into those areas just waiting for someone to come by and find them. It doesn't stop there. On the east coasts when the Hurricane Season becomes active after the storms have past is the best opportunity for finding treasure from the 1715 wrecks on Florida's east coast and off North Carolina.
I think while I am not out there storm chasing I may try my luck and perhaps have the opportunity to do both while having fun at the same time.

Arizona had a reasonable fall, and a nice rain event in early January, but nothing since. It looks like the long dry pattern is about to change, so hopefully we'll enjoy a wet February.

In the meantime, flowers in the southern areas of Death Valley are already going well, largely as a result of a big rain event in October.

Oops, thought you were taking about flowers....
LOL
Reactions: cdcollura

In February and March of 2019 the interior "inland empire" valley of southern California was lit up with intense colors of poppy wildflowers in what was called a "super bloom", and is shown below... 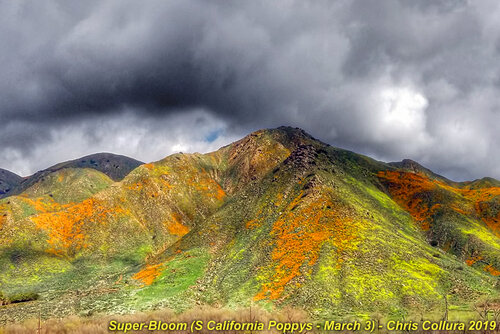 Although beautiful, the areas near Riverside and Lake Elsinore became jammed with traffic (especially near Walker Canyon) to the point a 15 minute trip on I-15 took nearly 2 hours. The mayor closed parts of the city and Walker Canyon during the traffic nightmare (after some deadly accidents and even emergency vehicles unable go get through / deaths since they couldn't get to hospital in time for emergencies).
Reactions: John Farley
You must log in or register to reply here.
Share:
Facebook Twitter Reddit Email Link
Top Bottom