While chasing in Southwest Kansas last Saturday I encountered one of these earth eater/vacuum cleaner type supercells. A mixture of dry, loose top soil and strong inflow winds led to a train of dust becoming ingested into the updraft. Here are some shots that show the evolution of the organized dust flow, after a while the whole base became shrouded and it made for a less photogenic scenery. (Shot 2 courtesy of my chase partner that day). If you have seen something similar, I would love to see your shots

The only Earth-Eater supercell that I hear a some folks still talk about is the Paducah supercell of May 30, 2012. The storm went from nothing to hold crap in seconds. At one point you honestly couldn't tell where the dirt and storm separated. Not to mention we were in the middle of a nasty drought in the panhandles. That storm was pretty damn fun to chase. 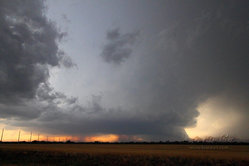 I don't know why, Marucs, but that shot is scary as hell. Love it!
Reactions: Marcus Diaz

I hesitate to even add to the conversation about "Earth Eating Supercells", because I worry that it's going to come across as the know-it-all-old-guy who's trying to trump everybody by saying..... "oh, I was there long long before you guys were even chasing and I've seen the world's ultimate storms and I've seen 2,249 tornadoes in my time, blah blah blah..which I swear, isn't even relevant, nor the way my mind works. Personally, I'm just thankful for StormTrack because we all have some very cool things to bring to the storm chaser "Show + Tell" from time to time, regardless if it was something a guy or gal experienced on their first chase or from crusty old veterans. Case in point....look at these gorgeous photos on the Paducah storm! I wasn't there, and I'm thankful we've got a venue to display fantastic shots like these! OK, that being said....since "Earth Eating Monster Supercells" is a moniker reserved for "VERY special, unique and awe-inspiring" storms, I would be remiss to not speak up about the truly mind-blowing ORIGINAL "Earth-Eating-Monster" storm of ( I think) 2002.....near Nara Visa, New Mexico. Personally, I've never seen anything quite like it...before or since, and the many other chasers and I that were on it that afternoon STILL bring it up in conversation all these years later when appropriate. This ravenous, insane beast stayed tornado-warned for over 2 hours...and had so much eastern New Mexico reddish Earth feeding into it with SUSTAINED winds of 50 mph or more (Warren Faidley and I measured it separately with our own anemometers), that only rarely could we see what was going on underneath it. Warren and I did see a very fat cone tornado for a few tens of seconds before it once again became obscured by the inflow. The storm was so vicious and violent appearing, that no chaser felt brave enough to drive near into it to get a visual of what was taking place internally. The ONLY guy who eventually did, and who immediately became my personal chase-hero for doing so....was the pride of Lubbock, Texas himself.....Mr. David Drummond. Once in there, he said he saw multi-vortex tornadoes, and quickly took photos of them, which were printed in the next edition of Storm Track Magazine....when it was an ink-and-paper publication. David....if you're reading this....would you please verify the year on this diabolically wicked storm and tell the readers here that I'm not exaggerating one little bit about this beast!! Thanks......joel
Reactions: Kevin Rimcoski
You must log in or register to reply here.
Share:
Facebook Twitter Reddit Email Link
Top Bottom