One of the more dramatic TC forecast changes in recent memory. Dorian's progged track up until landfall is reminiscent of Frances. That storm was moving so slow at landfall that I slept for hours inside the calm eye. I'm not a fan of slow-moving TCs, there is a lot of time for upwelling and land interactions to start weakening the storm before the eyewall arrives. Given the further pushback in timing and uncertainty, I'm postponing a chase decision until at least Sunday.

The latest GFS is also moving Dorian slightly more northward. Interesting trend. Won't take much of a wobble to make Jacksonville the center of attraction.... a place that floods like crazy.
Last edited: Aug 30, 2019

what's with the OP GFS and a few other runs now showing the eye staying offshore with the northward trek?? like just one or two of the ensembles members a couple days ago, which I thought were really odd at the time but now maybe not so odd. Still an uncomfortable range of tracks and it's getting closer....
Reactions: Mark Blue

Depending on where in Florida Dorian makes landfall that dropsonde reading does not bear good news for anyone. More discomforting, personally, is what Dorian may do after it hits Florida. Some of the ensemble models show it turning, going back out to sea and moving towards coastal North and South Carolina. Will be closely monitoring the storm's progress as it continues along its track.

Sounds like some serious gas issues along 1-95. Gas Buddy shows some stations still have fuel, but I'll bet there are mile-long lines. Can't believe some people from Miami are heading north towards Georgia? Really? Fewer and fewer models are taking the storm inland... but I'm not sold yet. Just a few runs mean nothing. Edit.... looks like another disturbance coming off the western African coast.... more fun ahead no doubt. 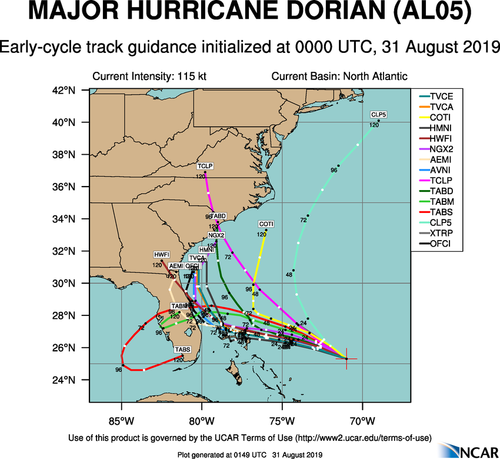 I see it made it to cat 4 today. I didn't hear the evening news say anything higher than that... but I'm thinking its going to make it to 5 tomorrow?
NHC is now showing it just skimming the FL coast. Maybe they'll get lucky and that beast will take one of the tracks out to sea shown above?

Its going to be interesting to see the forecasts change by tomorrow morning...and then to see it Sun afternoon after I'm back from camping/no internet.

They are especially interesting when the tracks go over the location of one's house. I have to keep remembering a lot can change in 5 days. It has in the last 24 hours.

David Cox said:
They are especially interesting when the tracks go over the location of one's house. I have to keep remembering a lot can change in 5 days. It has in the last 24 hours.
Click to expand...

Couldn't agree more. Some of those tracks happen to track uncomfortably close to where I live. And the potential for it becoming a Category 5 is no comforting thought either. We'll just have to wait and see what happens from here. A lot can change in 24 hours, as you said, but also in less time than that.

Rescheduled my trip to arrive in Orlando later today, but given the latest model trends, I'm cancelling the intercept. It always amazes me how some of these insane storms avoid the Florida coast. Had Dorian come in as a Cat 4-5, it would have caused insane damage -- taking lives and destroying so many homes and businesses. Florida may have dodged yet another bullet. Having said this, the tropical season is coming to life. I have no doubt I'll be out later this season so there is no need to unpack.
Reactions: Ethan Schisler and Dan Robinson

It really looks like the NHC wants Dorian to track along the coast, just like what most recent model runs have shown. 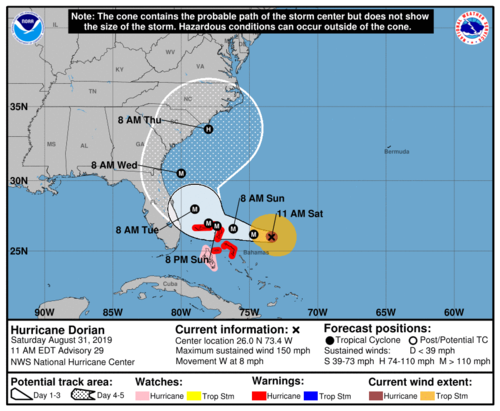 Yep - this is obviously a no-go for me as well. Sub-cat 3 barely grazing the SC coast with the weaker side of the storm, at a time of day yet to be determined, isn't worth the trip. Not to mention that models are trending even farther east out to sea with every run.
Reactions: Ethan Schisler

I cancelled my trip as well, had a flight booked into Orlando/Melbourne and was able to get a voucher for a refund. Disappointing for chasers but good news for residents.

Warren Faidley said:
Not enjoying the latest model runs forecasting a stalled hurricane over the same area for days. This would likely erode or clog coastal highways with debris for an extended period. I've also discovered the main garages in Daytona Beach are securing and shutting down Sunday night.
Click to expand...

I’ve said before on ST that chasing a hurricane is on my bucket list but I find the logistics impossible to get my head around. Over on this thread @Dan Robinson talked about getting into a parking garage just before landfall, when security personnel are likely already gone: Hurricane Chasing Tours? @Joe Cameron suggested that Gates are unlikely to be padlocked and can be opened manually if power is lost: Hurricane Chasing Tours? Now on this thread, Warren reports garages are being closed.

In the above-linked thread, it was said that usually you could get and stay in hotels. Now in this thread, Warren reports FL hotels already closing.

I am more confused than ever.

James, I haven't run into closed parking garages yet, but I always intercept hurricanes on the mainland side of the sound that is present along most of the US coastline. That is, I haven't yet ventured onto barrier islands where the winds are stronger, but the surge danger and risk of stranding is also highest. The barrier islands are typically under mandatory evacuation orders and curfews which would restrict movement and influence closings of hotels and parking garages there. That being said, I have not intercepted a hurricane on the Florida peninsula since 2004, so things might have changed.

Some exits of parking garages aren't gated and might allow you to enter that way in an emergency. I have found that local residents sometimes are coming in to store their vehicles and small boats there at the last minute, as was the case during Michael in Panama City.
Reactions: JamesCaruso

Anyone hear of any chasers heading to the Bahamas for this??

Josh Morgerman is currently in Marsh Harbour in the Abaco Islands. Hope he is doing well right now.

His last tweet was at 11:40am today. Can’t even imagine what he is experiencing! Of course, hope he is safe...
Reactions: Christene G

Before hurricane season we surveyed around 50 storm chasers regarding the season. Some results: 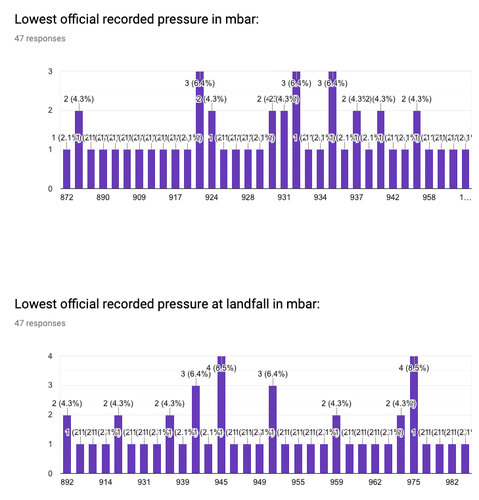 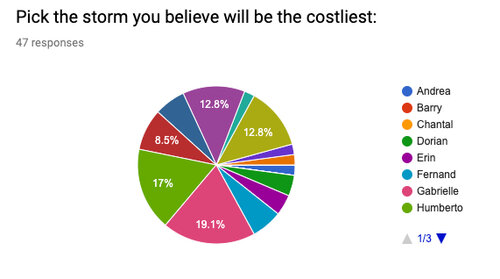 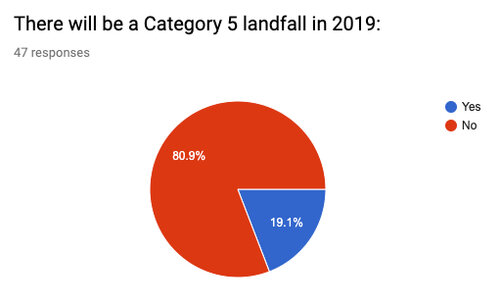 Catch an animated view of this... 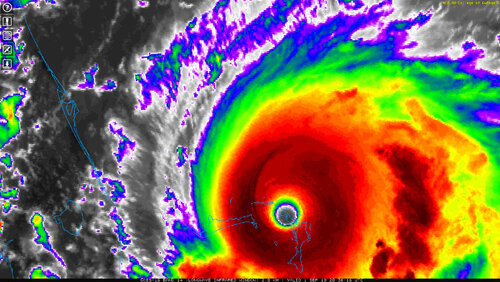 What an amazing storm. For the people of the Bahamas, an awful combination of powerful and slow-moving. Imagine having a high-end EF3 / low-end EF4 parked over a town for half a day...
Reactions: KPryor and David Cox

Lots of interesting views of Dorian from a variety of sources - from yesterday.
www.washingtonpost.com/weather/2019/09/01/incredible-views-hurricane-dorian-near-peak-intensity/
Reactions: KPryor and David Cox

Has anyone heard from Josh Morgerman or Jim Edds? At last update before landfall there they were at a school in Marsh Harbor, Abaco Islands.

Jim Edds has checked in from Hope Town: 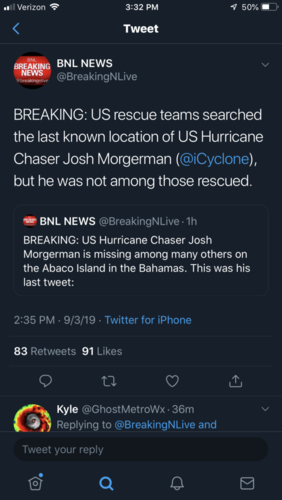