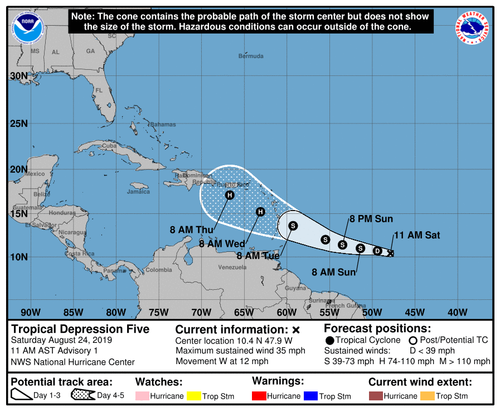 Interests in the central and northern Lesser Antilles should
monitor the progress this system.

Maximum sustained winds are near 35 mph (55 km/h) with higher gusts.
Gradual strengthening is forecast during the next few days, and the
depression is forecast to become a tropical storm later tonight or
on Sunday.

This is one to keep an eye on - though spread is huge, long-range models suggest a US landfall may be possible. We're obviously too far out to even take a guess at this stage, and medium-term guidance shows a very slow rate of intensification.

We have tropical storm Dorian now.

...DORIAN MOVING STEADILY WESTWARD...
...WATCHES WILL LIKELY BE NECESSARY FOR PORTIONS OF THE LESSER
ANTILLES ON SUNDAY...

Interests in the central and northern Lesser Antilles should
monitor the progress of Dorian.


DISCUSSION AND OUTLOOK
----------------------
At 1100 PM AST (0300 UTC), the center of Tropical Storm Dorian was
located near latitude 10.9 North, longitude 50.4 West. Dorian is
moving toward the west near 14 mph (22 km/h). The tropical storm is
forecast to move generally west-northwestward at a similar forward
speed for the next several days. On the forecast track, Dorian is
expected to be near the central Lesser Antilles on Tuesday.

Maximum sustained winds are near 40 mph (65 km/h) with higher gusts.
Gradual strengthening is forecast during the next few days, and
Dorian could be near hurricane strength when it approaches the
central Lesser Antilles on Tuesday.

Tropical-storm-force winds extend outward up to 25 miles (35 km)
from the center.

Models are **currently** in tight agreement in regards to the path. Could be an interesting storm if the path does indeed stay north of the major land masses. Still too far out to start planning an intercept, but things could change by the end of next week. 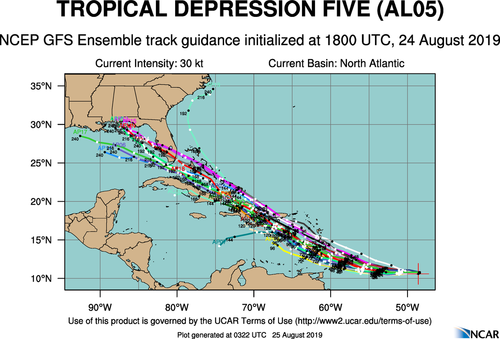 Still a good agreement on a US landfall, with the main jet corridor staying well to the north which should keep shear and westerly steering flow at bay. The operational GFS runs showing a recurving track NE are a little puzzling given they show the same jet configuration as all other models that agree on the westerly track. No surprise that intensity guidance has been steadily trending upward as well given the transit across the Gulf Stream waters.

Chaseability-wise, Dorian is still very much a good candidate, with many solid shelter options within the current range of landfall locations and probable Cat 2+ intensity. The wild card is timing - overnight landfall is looking more likely with each update. Nonetheless, I definitely have my eye on this one for a chase.

We may even have a second landfall possibility on the Gulf coast to watch for, particularly for a more southerly track.
Last edited: Aug 28, 2019

Have initiated the green light for Dorian.

Really a fantasy forecast at this time, as once the storm transitions into a hurricane, which is likely, the models will have a better handle on the track. I will need to study the potential strike zone carefully, as I don't recall too many chase opportunities in the NASA zone, although that is a relatively small region and not a big concern. Otherwise, bring it on as there is great infrastructure all along the coast. Hopefully it will be a day time storm, but too far out to call now.

I'm sure TWC is getting everyone limbered up for the moon-walking.
Last edited: Aug 28, 2019
Reactions: Dan Robinson

Like Michael, the Dorian forecast is going from zero to 100 fast with further slowing and more transit time over the Gulf Stream. With that the chaseability also improves with sunrise or later landfall on Monday morning. Radar presentation from KJUA (Puerto Rico) already showing a healthy and intensifying storm.

All booked and set with multiple staging and deployment options along the Florida coast. I generally wait to board the plane at the last moment, but I will likely add another day to the scouting schedule since this will likely be a panic-generator along the Florida east (and maybe west) coasts. Gas will be going quickly. Set to depart on Friday afternoon barring a major shift in landfall timing. Had to add the Miami region to the overall plan as there could be a shift south / west if the NE high builds.
Reactions: MikeD, Mark Blue and Steve Miller

Arrive Fort Lauderdale tomorrow evening and work my way north or stay put if things so south. If Dorian goes too far north (north of Jacksonville, FL), then it becomes a treasure hunting expedition along the Florida coast as big waves push hordes of treasure on the beach. Win - win situation.
Reactions: David Brookshier and Marc R. O'Leary

Booked my flight into Melbourne last night to arrive late Saturday night. My chase partner is coming down from North Carolina (from prior engagements) and we are going to tackle this one together. Will make a decision as to staging locations when it gets closer.

I'm going for a reinforced parking garage first as this could easily go cat 4+. Michael ate my 360 cam last year so I'm going to play this storm a little more strategically. Its all down to logistics now. If I can get there in a good position and setup on time I'm in. Daytime landfall is always a huge win photography wise

Just remember many garages are now locking their entrances once a storm approaches, so don't get trapped inside or worse, find it closed if returning at the last moment. I've called along the coast this morning and now that a Category 4 storm is being discussed, many hotels on the coast side are closing on Saturday.

Still early to pinpoint landfall point in Florida but I wasn't even supposed to be in Florida now (my return to S California was on 8/27 and I moved it up to 9/4). Right now it appears to be a category 4 (130 MPH) at landfall anywhere on central east coast of Florida during the day on Monday (Labor Day, Sept 2).

The next few days will be crucial.

The timing is going to be everything. Impossible to nail it down now if it's night or day. Slow movement might help extend a daylight period.
Last edited: Aug 29, 2019

I haven't caught up much on Dorian, but it might be interesting to see how Dorian does over the weekend. Last thing we need is a Category 4/5 hitting Miami or Florida's east coast, however. Given current predicted track, Miami probably would not see the worst of it, but never know.
Last edited: Aug 29, 2019

Any talk of it being like another Andrew, crossing the peninsula and into the gulf ?

Could cross Florida but would not have a lot of time to build a mega surge if it turns north quickly. Florida is flat, so the cyclone would stay somewhat intact if moves across quickly.

Yes, but it may get more interesting should Dorian cross Florida, but Dorian can wallop the lights out of FL's east coast should maximum surge be realized thanks to king tide and Cat. 4 strength. That could be a huge concern when Dorian hits that portion of FL.

Not enjoying the latest model runs forecasting a stalled hurricane over the same area for days. This would likely erode or clog coastal highways with debris for an extended period. I've also discovered the main garages in Daytona Beach are securing and shutting down Sunday night.

Seeing the latest NHC update, its up to 105mph / Cat-2 now. Expected to reach Cat-3 Friday.

The current graphics they show sure looks like it will cross Fl? Unless it turns north after hitting?

The steering currents look fairly weak in the medium range. There's a trough ejecting east from the Great Lakes/Hudson Bay vicinity now. Unlike most historical analogs (late summer hurricane near Dorian's current position), instead of continuing northwest or turning north up the coast, the models are basically unanimous in a WNW turn over the next couple of days.

It's beyond that when things get tricky. Dorian likely slows down, but does it continue drifting west, does it stall or do some sort of loop near Florida, or does it eventually turn north? That eventual turn is key, if it does happen. When it happens will have major implications for not only Florida, but the Carolinas, Georgia and possibly Alabama as well.

Even though the tracks are not indicative of what's a realistic scenario here, all of the analogs that featured a northwest-moving hurricane near Dorian's latest position are all historic storms:
Connie, Floyd, Fran, Gloria, Hugo and the 1898 unnamed hurricane. Of those that continued moving northwest (1898 and Hugo), both made landfall as a Category 4 hurricane.

The irony.... my flight from Tucson to Miami was cancelled because of the line of storms that passed through Dallas. No way to reroute ATM and get there before late tomorrow. Might have to consider flying in further north (Atlanta) and heading south. Less panic further north, at least for the moment. Hopefully the outright panic in Miami will settle down. Have not had time to look at the models, but the NHC seems to be leaning toward either a coast skimmer or off coast event. Next 24 hours will be interesting.

Warren Faidley said:
The irony.... my flight from Tucson to Miami was cancelled because of the line of storms that passed through Dallas. No way to reroute ATM and get there before late tomorrow. Might have to consider flying in further north (Atlanta) and heading south. Less panic further north, at least for the moment. Hopefully the outright panic in Miami will settle down. Have not had time to look at the models, but the NHC seems to be leaning toward either a coast skimmer or off coast event. Next 24 hours will be interesting.
Click to expand...

Maybe, S.Carolina will be better ?