I am a little unsure as to how to detect outflow boundaries on upper air charts. I know that they can pinpoint the eastern most advance of a dryline and can be quite usefull in predicting convection. Any pointers or suggestions would be appreciated.

Paul Redmond said:
I am a little unsure as to how to detect outflow boundaries on upper air charts. I know that they can pinpoint the eastern most advance of a dryline and can be quite usefull in predicting convection. Any pointers or suggestions would be appreciated.

Outflow boundaries are low-level features; as such, you cannot find them on upper-air charts. Your best bet for locating any possible OFB is to examine surface observations and radar and satellite data. OFBs, nearly by definition, mark the leading edge of surface cold pools produced by thunderstorms (and just showers too, I suppose), so you should be able to pick them out by looking at surface temperatures, dewpoints, and winds. For example, you'll often see lower Ts, lower Tds, and more backed surface winds in the relatively cool air behind the OFB. You may also be able to corroborate your suspicion of the OFB location by looking at radar and visible satellite data, as OFBs may be marked by a radar "fine-line" or a difference in the character of low-level clouds across the OFB.

Since the surface thermodynamic conditions are usually different across the OFB, there tends to be enhanced near-surface vorticity along the OFB (the baroclinic generation term of the vorticity generation / destruction equation). In terms of forecasting for tornadoes, supercells, etc, we often look for the "cool side" of the OFB to "cook" during the day. In other words, many chasers and mets closely monitor how much insolation is occurring on the cool side of the boundary. Sometimes, strong surface heating can lead to significant destabilization on the cool side of the OFB, leading to very favorable shear-instability conditions. Note that enhanced, baroclinically-generated vorticity may still be present even if the temperature or theta-e gradient across the OFB is removed by the afternoon! The presence of a buoyancy gradient or baroclinity means that vorticity is being generated, so the removal of said gradient merely means that vorticity is no longer being generated, even though vorticity may still be very significant since it has been accumulating through the preceeding hours. Eventually, friction / diffusion / viscous forces will "spin down" this vorticity, but it's important to remember nonetheless.

Residual OFB's can be cool in the summertime (or at least it seems to me that they become more of a player then) and can reinforce other boundaries ... there are times when SRH is enhanced thanks to outflow boundaries.

You could easily see an OFB associated with the gust front on the bow echo that came over KC a couple weeks back (look in front of the anticyclonic - lower half of the bow). I bet that gust front would have looked AMAZING if it happened during daylight!

If you're looking for an OFB several hours or even a day later, then as Jeff says, you'll have to seek out some surface plots or satellite imagery. Sometimes the temperature variations are pretty slight - -

TL;DR: Since the 2008 post (herein) pointing to VISIT TRAINING MODULE 9.2.1, what progress has been made in identifying variables to use in analyzing for OFB that are likely to initiate future convection? (E.g. virtual potential temperature or its gradient.)

I’m posting my question here because it seems like a logical extension of the original discussion, and indeed resulted directly from it.

LONG VERSION: I moved to OK from NJ in Mid-2018, and until this year, it was not possible to travel more than an hour or so from Tulsa to chase. This year, most of my success has come from dryline chases, following fine line echoes near NEXRAD sites, and observing changes in the Cu-fields via satellite imagery. If an outflow boundary was pronounced enough to be detectable on publicly-available maps, that was OK, but there were several occasions where the text discussions mentioned outflow boundaries and I could not find anything in the surface data plots.

An internet search brought me to this thread, and I went through the VISIT module, and began working through the references at the end. I got off onto a tangent looking at modeling studies of cold pools and although most of them deal with tropical cold pools, it was still instructive. For instance, this paper did a quick review of atmospheric variables that could be used to detect cold pools:

Virtual Potential Temperature did seem to have some value in identifying outflow boundaries, so I decided to try it out. On 6/25/2021 a Mesoscale Discussion was issued for East Central Kansas, based on the existence of outflow boundaries (which did not become apparent until I plotted the data myself.) 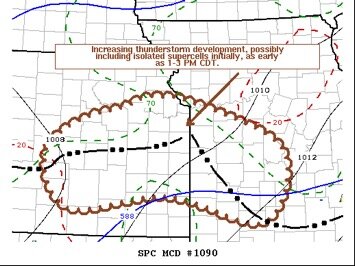 ​
The surface analysis below presents virtual potential temperature as filled green contours. There is evidently a cold pool behind the outflow boundary in SW Missouri. (I analyzed the boundary in KS as a stationary front primarily due to the presence of a trough along which it was aligned.) Although this “pool” persisted after morning convection had cleared out, I just wasn’t convinced this was enough of a contrast feature to be useful. 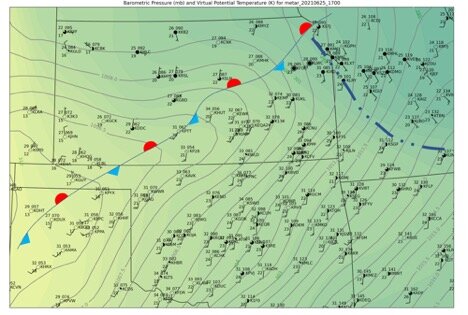 ​
Looking at a few other cases, including the study presented in

it just didn’t look like virtual potential temperature (VPT) would be a good discriminator. The Borque, et. al. paper even purported to analyze a continental cold pool and the pools VPT found dissipated within an hour or two of initial formation. In the case of a post on the Hugo, MN tornado in another thread, VPT analysis showed no cold pool at all.

So I went back to working the VISIT references, and found a comment by the module developer (LaDue) in the notes to a paper by Hane, et.al: “I'll argue that Theta-V gradients is the correct solenoidal forcing mechanism for every boundary.” So I repeated the analysis using the gradient in VPT: 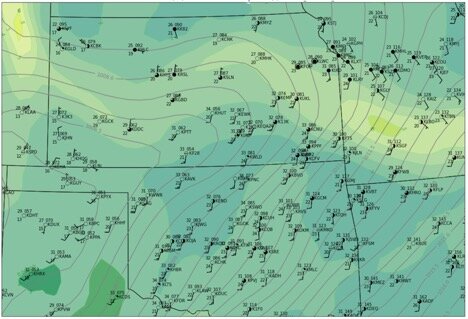 ​
Now we see a pronounced feature in the VPT-gradient, aligned along the OFB in SW MO. This seems promising.

I know this has been a long post so far, but before I slog through too many more papers and test cases, I’m just curious if there is a better approach. LaDue’s comment certainly has given me more work to do. Any thoughts?
Last edited: Sep 2, 2021
You must log in or register to reply here.
Share:
Facebook Twitter Reddit Email Link
Top Bottom