Sometimes in forecasting tornadoes, you can get everything technically right, and yet it all goes horribly wrong.

Three days before the killer Alabama tornado struck, government severe-storm meteorologists cautioned that conditions could be ripe for twisters in the Southeast March 3. Then, an hour before the tragedy, they warned that a strong tornado could occur in two particular Alabama counties within 30 to 60 minutes.

And that’s what happened.

To a meteorologist, the forecast was the equivalent of a hole-in-one in golf or a slam dunk, but with so many people killed, “was it a success or a failure or both?” asked Colorado State University meteorology professor Russ Schumacher.

Forecasters “painted a pretty clear picture that something bad was going to happen,” Schumacher said, and “there’s certainly success in that. On the other hand, we don’t like to see entire communities to be turned upside-down like this. So there’s more to be done.”

Predicting with any precision where a tornado is going to go is still beyond the limits of meteorology, which is why warnings went out for a large two-county area when a tornado might be only half a mile wide. And getting people to listen and take precautions is another matter altogether.

Forecasting tornadoes combines the hard physics of meteorology, the softer human factors of social science and more than a dash of chaos.

At the National Oceanic and Atmospheric Administration’s Storm Prediction Center in Norman, Oklahoma, forecasters look for certain ingredients that can make a tornado. These include warm moist air coming from the south and stormy weather chugging from the west that can bring instability. That’s when you can get supercells, which is where tornadoes come from.

But maybe only 10 to 20 percent of supercells spawn tornadoes, said prediction center forecast operations chief Bill Bunting. There are other factors at work, including erratic wind behavior known as wind shear, the amount of cold air present, even the size of the rain droplets, meteorologists said. And then there are the unknown factors at play.

Given all that, the best meteorologists can do is say seven to eight days out — four to five is more usual — when conditions will be ripe for tornadoes, Bunting said. And even that doesn’t mean they will happen. And certainly not over all of the large area that meteorologists give in their several-day-out alerts.

From 1994 to 2017, the weather service’s “false alarm” rate for tornado alerts was 74 percent, while last year it dropped to 69 percent, according to weather service spokeswoman Maureen O’Leary.

The problem is that a tornado is a rare, small, fleeting event, harder to predict than giant phenomena like hurricanes or big winter storms. A one-mile variation in a tornado’s path can mean the difference between plowing up a field and wreaking havoc in a populated area, Bunting said.

Bunting’s office might warn people to watch out across a five- or six-county area or even a two- or three-state region, but “only a very, very small area of that risk area will actually experience dangerous conditions,” he said.

And people who don’t get hit may not bother to listen the next time, said University of Oklahoma meteorology professor Howard Bluestein.

That’s the social problem, which may be even bigger than the meteorology one, Bluestein said. And that’s where Kim Klockow-McClain comes in. She is a researcher for NOAA’s National Severe Storms Laboratory, also in Oklahoma, who specializes in trying to find out why some people listen and react to warnings and others don’t.

“Social sciences, I think, are really going to the heart of the issue,” Klockow-McClain said. “You’ve got to receive the message. You’ve got to understand it and know what to be able to do about it.”

For example, people in mobile homes, which are especially vulnerable to tornadoes, are less likely to receive or seek out storm alerts, she said. Even though they are told to get out, studies show mobile home dwellers still “shelter in place,” Klockow-McClain said. “They think it’s the best thing they can do or the only they can do.”

The weather service started to change from just focusing on better forecasts to better communication of warnings in 2011 because the agency noticed that the forecasts had improved but that the outcomes were still similar to what they were in the 1950s, ’60s and ’70s, she said.

There is definitely some sort of a disconnect somewhere. Whether it be people receiving/ heeding warnings, availability of shelter, or all of the above. Here is an article written just a day or so ago by Josh Johnson, who is chief meteorologist at one of the local stations in my hometown, Montgomery, AL. The county affected by the tornado on 3 March is in their coverage area. The points he makes are along the same lines of the OP. While his article is written more from the perspective of how to help things there in Alabama, it all pretty much applies universally.

Good points in general but he went off kilter on #2 I see where he's going - but that is FAR too extreme, and not supported by data, and disrespectful to those who issue warnings as a public service. But otherwise great!
Reactions: Michael Norris

I'm from a town about 10 miles from Beauregard, and I can honestly say that because tornadoes aren't really common in the area, people don't take it incredibly seriously when they hear the sirens. Most people go outside to watch.

Re: the WSFA article:

I didn’t think #2 was particularly controversial, although yes it was certainly an overstatement to say that false alarms “undermine the credibility of the entire weather warning process.” I think what is really needed is more public education about probabilities and inherent uncertainties in forecasts.

#4 - warning mediums - no mention of Emergency Broadcast System via cell phones? Optimizing this system has to be one of the best possible ways to get warnings to the most people. Even the poorest among us have cell phones just about biologically attached to themselves these days.

Mobile home parks - I’m not a big “government regulations” type of guy, but I think mobile home parks should require storm shelters, in the same way that other infrastructure is required in other types of residential developments under laws and building codes.
Reactions: RPuskas

#4 - WEA is still in its infancy. It's getting better, but you're right that he should have pointed it out.

Most mobile home deaths in this event were not in mobile home parks. Suggesting that residents double their monthly rental to build and sustain a tornado shelter, when they're very likely to never see a tornado let alone die in one, means those residents couldn't afford to live there. I'd prefer them having some sort of shelter versus being homeless.

rdale said:
Most mobile home deaths in this event were not in mobile home parks. Suggesting that residents double their monthly rental to build and sustain a tornado shelter, when they're very likely to never see a tornado let alone die in one, means those residents couldn't afford to live there. I'd prefer them having some sort of shelter versus being homeless.
Click to expand...

Also, most older houses in the south use a basic crawl space foundation, pretty much all these houses are like "mobile homes", minus any strapping. The houses in my neighborhood literally just sit on a few bricks on dirt. With the flooding, no chance for an underground shelter.

Most mobile home deaths in this event were not in mobile home parks. Suggesting that residents double their monthly rental to build and sustain a tornado shelter, when they're very likely to never see a tornado let alone die in one, means those residents couldn't afford to live there. I'd prefer them having some sort of shelter versus being homeless.
Click to expand...

Rob, I didn’t mean to suggest that they have individual shelters, I meant the mobile home community as a whole should be required to have one shared shelter.

Separately, when you say “they're very likely to never see a tornado let alone die in one”, I think this gets to the heart of the issue. The probabilities are so low that a tornado will strike a given location, even when one is on the ground heading in your general direction, that people are simply willing to accept the risk and, for example, go to the window to see what’s happening rather than take shelter. No different than knowing smoking is bad for you but still playing the probabilities that you won’t die from it. I just don’t think this is ever going to change unless we are able to tell people with absolute certainty what street addresses a tornado is going to hit.

I do know what you mean But installing a community tornado shelter in a mobile home park would cost $50,000 - $150,000 depending on the size. Rent levels would SKYROCKET to cover that cost.

After so many years of this, I just don't understand. There are maybe 1-2 days a year (if even that) in the deep south (or anywhere in the US) where a specific location has an elevated risk of tornadoes, moderate or high. The potential of a major, localized event is generally known days, hours and minutes in advance. So why not just plan on those few days to have some type of alternative, underground shelter location available? I'll never figure it out. I remember the tornado that struck Happy, TX in 2002. Two people died in a mobile home about 40-50 yards from the underground shelter (seen below). There was a 12-minute advance tornado warning from the NWS in LBB and the town had activated tornado sirens. 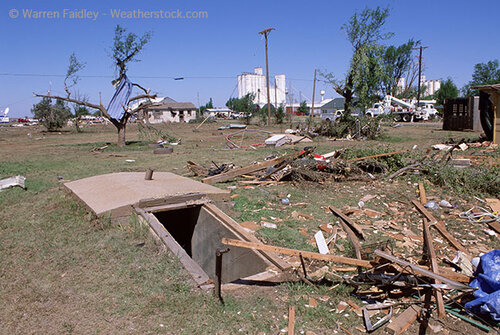 In my view, there's only so much we can do when it comes to warning the general public of the dangers that result from these types of storms. Unless technology advances to the point where we can pinpoint with accuracy where tornadoes will exactly strike, there's not going to be much change. As for the underground shelters, it would be ideal if every manufactured home should come with some sort of shelter for exactly this reason. Sadly there are cost factors that prohibit this, along with the simple fact that in some areas underground shelters simply wouldn't be sound due to flooding and other factors.

While it is unfortunate that 23 lives were lost in this case, I can't even begin to imagine what would have been the case if it wasn't for the great work by the NWS and SPC. Sadly some people just don't realize the seriousness of the warnings and will choose to do the opposite of what is recommended. There's only so much that can be done about the choices that people make, and no amount of communication will change that in my mind.
Last edited: Apr 17, 2019
You must log in or register to reply here.
Share:
Facebook Twitter Reddit Email Link
Top Bottom