Concerns about 2021 first big events (numbers, traffic, idiots and such)

A video was just posted on YT, by someone claiming to have been hit near Lockney TX.
Be careful people, no shot, or video, is worth it.
Reactions: Jeff Lieberman

I’m posting these two screen shots not knowing what the actual position of this chaser was as the tornado approached and then crossed the road. Not being there, I have no idea what kind of visibility there was either. I scribbled over the chaser’s name from the two screen shots. It looks like he wasn’t in a very good position if the tornado had made a turn to the left. I’m really curious what this person saw as the tornado went by. 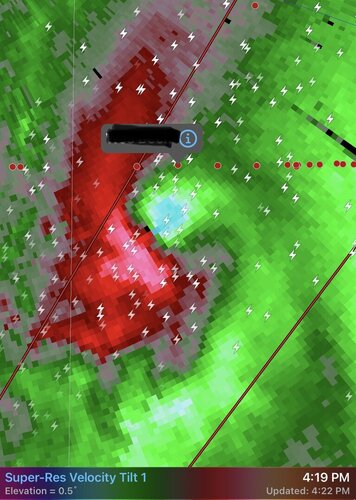 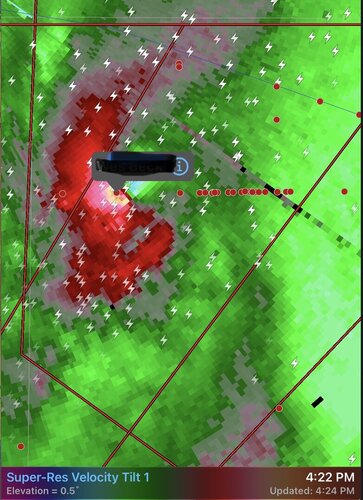 Ken Perrin said:
A video was just posted on YT, by someone claiming to have been hit near Lockney TX.
Be careful people, no shot, or video, is worth it.
Click to expand...

A disturbing trend this early in the season. If close-enough-to-get-hit is the new standard for chase videos, it's only a matter of time before we're talking about more than broken windows.
Reactions: Ken Perrin

Dean Baron said:
I think we need to be careful about posting screenshots of SN locations and using it to say a chaser was hit by a tornado. There can be significant lag in SN location so using it as the only source of information to say a chaser got hit can be a dangerous accusation.
Click to expand...

Dean is correct. My position on spotter network is almost never anywhere near where I am really at a given time. For starters, I only beacon thru RadarScope, and the only time RadarScope beacons is when it is in the foreground being used. Since I use GR mainly, I only occasionally have RadarScope in the foreground. Anytime a chaser has the phone asleep or is using another app, it doesn't beacon. Of course if I make a report, the location updates and is correct.

Second, RadarScope doesn't show you how old a beacon is, and when you loop a radar the positions don't update. I'm not being down on RadarScope (I love it) - but it wasn't intended to accurate report everyone's position all the time.

As for number of chasers you have to remember that many vehicles have more than one chaser in the car running RadarScope and reporting position, so does those 4 dots represent 4 chasers in separate vehicles or is it 1 vehicle with 4 chasers in it each beaconing at different times as they go down the road? Add in limited zoom capability and it always looks worse that it is.

As someone who chased both Friday and Saturday in the panhandle I can tell you it wasn't anywhere near as bad as it looked. Lots of cells kept chasers spread out on Saturday.

Before I end my rant I will note that chaser convergence is real, and is a hazard. My rant isn't to say it doesn't exist. It just isn't always as bad as folks make it out to be.
Reactions: Andy Wehrle, JamesCaruso, Dean Baron and 2 others

Tomorrow (Wednesday, March 17th into early Thursday), will be a real challenge for spotters, local chasers and inexperienced chasers. A lot of PDS soundings and multiple rounds of assorted storm modes including some fast moving and messy set-ups. Not to mention poor visibility due to trees and darkness. It will interesting to see if everyone gets through unscathed.
Reactions: Dave Chapman, Jason Boggs and Ken Perrin

Although the last few days provided very little action, I was pleasantly pleased at the numbers of chaser out.targets were spread out..as were chasers. All chasers out were very good in car and traffic matters so the idiot meter was low. There may be hope yet..lol
Reactions: Verne Carlson, John Farley and Jeff House

I think we got very lucky with this most recent stretch of events. Each day had at least a couple targets/storms to spread folks out, and most events were relatively low-end (mostly SPC Slights), so that may have helped not draw too much attention. If the 26th had verified in southwest/western Kansas as many chasers had been hoping, we may have had chaser-jam incident. I think a majority of chasers, including myself, were in Scott City, KS or very close to that location to start the day. Of course, a chaser-jam from that setup is pure speculation, but it has been a while since I've seen that many chasers in one spot.

As for my personal experiences, I didn't witness anything out of the ordinary during my recent 11-day stint in the Plains. There were a couple of incidents of chasers unnecessarily pulling out in front of me and reckless passing, but I'd contribute that to typical careless behavior rather than a pent-up chasing desire after the crappy last year. I saw others on Twitter reporting similar incidents. I did have a LEO approach me and several other chasers along a stretch of road on May 24 as we were watching the initial storm north of Leoti to say that they had received a report(s?) of chasers running stop signs in the area. He warned us to not drive recklessly and that if we saw a chaser doing so to report them, but again, I think this is base line/normal, sadly. From a traffic and driving stand point, my experience this spring was very mild compared to other stretches/events.
Reactions: JamesCaruso
You must log in or register to reply here.
Share:
Facebook Twitter Reddit Email Link
Top Bottom