The Tornado Project's "Tornado Video Classics" series ended after three volumes of footage dating from the early days of storm chasing into the first home video explosion of the early-mid '90s. Now, with hordes of chasers, HD camcorders, and everyone and their uncle armed with a decent video camera in their cell phone hoping for their 15 minutes of YouTube fame, there is more tornado video than ever. How do you sort out the best?

My criteria are:
Decent camera (can't be vertical or look like it was "shot with a potato," as YouTube critics like to say)
Relatively steady - tripoded is best, some shakiness is okay and understandable if handheld, but it has to be relatively steady on the tornado for at least 10 seconds at a time.
Relative minimum of shouting/screaming/swearing. Again, some is understandable given the circumstances especially in amateur footage, but this disqualifies almost everything shot by/in the vicinity of Reed Timmer.

Pecos Hank's Pilger day video. Might be the best tornado footage of the millennium to date. Tripoded, calm, cool commentary, Pilger twins and then graceful rope-out of Pilger II whips around the maturing Stanton tornado.


Stephen Locke's video of the Langley-Salina, KS EF4 of April 14, 2012, especially the part after about 3:40 when the camera gets its focus back and it's just spinning in a field right next to him, suction vorticies whipping around the edge.


Holy Tornado's video at Chickasha, OK 5/24/2011. This tornado touches down as a graceful elephant's trunk, crosses the road right in front of them, then rapidly intensifies into a violent EF4 spewing out a massive amount of debris.


April 27th and Joplin day that year also produced some amazing (although tragic) footage, as did Henryville '12 and Moore and El Reno 2013. Rozel and Bennington in '13 also resulted in some spectacular video as well, I'm sure.

Although the camera quality is less than ideal, I'd say ABC 33/40's skycam footage of the Cullman tornado on 4/27/11 also qualifies for the unique vantage point and watershed moment in tornado history (first violent tornado and first city impacted by a violent tornado of the second Super Outbreak, broadcast live as it happened).
Reactions: Jeff Wright and Jeff House

It won't let me embed more than three videos per post, but here's what I'm referring to above. Everything from about 31:30 to 38:45:


Here's an example of amateur footage that would qualify, from that same outbreak. Quality is decent for SD, and while a highly dangerous decision for them to wait that long looking out the window, they kept the camera fairly steady and their frightened commentary (almost) clean as the EF4 roared over the tree line toward them at 50-60 MPH:


What would you put in if you were producing a new TVC series for the 21st century (it can be your own chase footage, if it meets the criteria)?
Last edited: May 6, 2016
Reactions: Jeff House and Ben Faber

When I have time, I plan on re-releasing the videos I made back in the 1990's including the "Tornado Warning" series. Much of this footage no longer exists and I've been told I have the only copies.
Reactions: John Olexa and Andy Wehrle

I still have TW1, 2 and 3. Classic stuff and among my favorites back in the day!

A few of my favorites:

Pilger-Wisner twins both in barrel stage, shot by local resident:

There a many more I'm missing, but those are a few that come to mind.
Reactions: Andy Wehrle and Jeff House

This footage from May 29 2004 in Southern Kansas of the Harper County, KS cyclic supercell might be some of my favorite tornado video. And perhaps one of the top events that I wished I could have chased!

In the top three for sure......Jeff Piotrowski - Joplin. No further explanation is needed.

McGowan's Alpena video for sure. Thanks for that Dan, I knew I'd seen that but couldn't remember who or which event.

Also the Dallas trailer-throwing video looks like someone shot their TV screen, the original footage from the station is surely better quality.
Last edited: May 6, 2016

That video out of Rochelle is the most incredible I have ever seen. My favorite is probably the Phil Campbell one however, just to see that kind of speed and strength is inconceivable

This from today's event is a candidate right here!

Several amazing clips from yesterday's event would be in for sure, including these:


I'm sure there's something out there from the Wray event that would be a must-have, as well!
Last edited: May 10, 2016

One of my favorites, and i think mostbof Andy's other videos would qualify as well.
Reactions: sdienst and Andy Wehrle

I had not seen this one before...excellent but tragic video of the Pilger twin that actually went through the town, which explodes in a massive cloud of debris. Correct me if I'm wrong, but about 2:40 that appears to be a whole house flying through the air. Maybe the Wizard of Oz wasn't so far off after all.

Since it was shot, I've always liked Tim Samaras' shot of the Salina EF4 from 14 April 2012 going across a highway a few hundred yards down the road, mostly because it was the first high-quality video I can recall seeing in which you can clearly see vapor condensing as parcels approach the tornado...in other words parcels hit their LCL moving laterally into the tornado.

I only know of the full clip being on his Driven by Passion II DVD, but the segment that includes what I'm talking about can be found at this link (video starting right around 1:00):

I did see this same behavior from multiple videos of the Elmore City-Wynnewood, OK tornado from this past week. Darin Brunin/Dick McGowan's and Scott Peake's videos both show it pretty well.
Reactions: Jeff House

Andy Wehrle said:
Correct me if I'm wrong, but about 2:40 that appears to be a whole house flying through the air.
Click to expand...

Yes that is a house flying! What's even more remarkable is that it was put back down on its foundation, though facing the wrong direction according to this article http://m.omaha.com/news/metro/video...d6d-b45f-53f5-b4f5-e71a2769a6ef.html?mode=jqm

and here is a picture of the house, EF1ish damage. 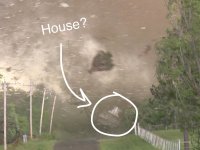 In Dick McGowen's video a house appears to get sucked into the tornado.

Here's a video from May 9, 2016 that I missed before, showing some of the clearest multi-vortex action I've seen yet (other than McGowan's Alpena video) in both the Katie and later Sulphur tornadoes. There's several chasers' versions of it crossing that country road as a Pampa-esque drillbit and blowing apart a house, but I didn't even know the Katie tornado had a multi-vortex phase this dramatic.


This is another video of the Cullman, AL tornado of 4-27-11 from "mcgrathimages" that I think would qualify. You have the secondary funnel looming out ahead, then the main vortex in contact with the ground as a not-fully-condensed but violently rotating drillbit and moving at blinding speed.


Unfortunately, the Pilger video that appears to show a house being lofted in one piece, Wizard of Oz style, seems to have been removed from YouTube.
Last edited: Feb 28, 2018

Going to add some of my favourites to this in the hope of reviving the thread!


Val and Amy Castor's remarkable footage of the May 3rd tornado.

A distillation of many tornadoes in a fictional outbreak might be a good project. The very thin tornadoes talked out elsewhere for a beginning…Jarrell super thin footage…then the “Holy Tornado” footage above…Tuscaloosa…Andover…Moore… Hackleberg…then El Reno as it got diffuse…Pilger then Grazulis video where one tornado weakens and is absorbed into the other…then Cordova above…all presented as if it were one event.
You must log in or register to reply here.
Share:
Facebook Twitter Reddit Email Link
Top Bottom