This is an atmospheric effect that I was previously unaware of, and was only discovered thanks to my 5-year-old granddaughter swinging on the swingset in our backyard, who pointed it out to me. This view is looking nearly straight UP in the sky (directly overhead). I first thought it was a "garden variety" sun dog, but was perplexed by its orientation, which was 180 degrees the opposite of what it should have been (the sun is out of the bottom of the frame, to the west). I pulled out my iPhone an took a snap. Googling it, I discovered its true identity as a Circumzenithal Arc - the first one I've seen in my nearly 58 years. Quite a treat! 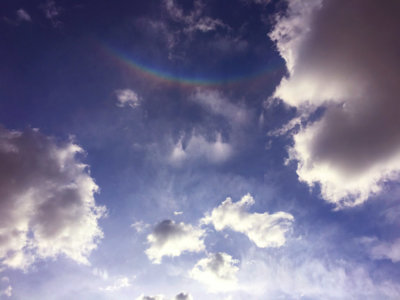