Postscript update:
Finally got off the front range and bought an awesome 100 yr old home for a really great price in Kimball, NE. I've had amazing luck chasing on all sides in this region, even having one tornado chase me into the north side of town just a couple years back.
Officially now living in T-Alley and the house even has a bonifide storm cellar though I'll probably not be indoors if one visits! Of course the million dollar question, what kind of 2021 season will we have?

Perhaps others would like to comment/update on how your plans are manifesting?
Reactions: James Wilson, JamesCaruso and Mikayla Norris

In my previous post, I had been anticipating being stationed at Offutt AFB near Omaha, NE. However with the military being what it is, I ended up staying in San Angelo, TX until September of 2020 when I got stationed in Altus, OK. Honestly, I'm even more excited. The "chasing mecca", so to speak, is just a couple hours north of me, and I have equally easy access to the panhandles and north Texas. So now chasing in the plains will likely end up as mostly single day/ backyard chases. I am even planning on taking a few weeks of leave in late May, so I can be freed up on a moment's notice if need be. So definitely a much different outcome than anticipated, but for chasing I see it as an improvement.
Reactions: Randy Jennings, JL Gacke and James Wilson

When I posted this I was thinking along the lines of another investment property. The mortgage would be paid though rents and one unit would be open for my use when in town. This is what I am currently doing in Kansas City and I am looking to add more properties here. I thought Colorado would be the answer but I have shifted my thinking to an RV where I can go anywhere including warmer climates in the winter. This might only be a 5 years or so deal but the current direction I am looking. Class A diesel RV pulling another vehicle or a vehicle pulling a 5th wheel ... to be determined.
Reactions: JL Gacke and Mikayla Norris 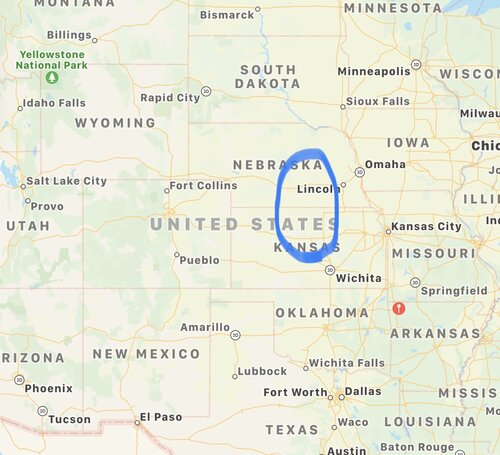 If my only consideration was being where I could chase almost anything, my destination would be somewhere within the blue circle. Once everything else was considered, my wife and I will be moving to Bentonville Arkansas as soon as our last child is out of the nest. Officially in 1 1/2 years, but we are already looking at places to buy. We’ll be moving from the Upper Peninsula of Michigan, so even that will be a big improvement of my chase location.
It’s a blast chasing, but you have to have other interests and hobbies to get you through the year. Unless you’re Reed Timmer chasing everything including snowstorms, you’re gonna have way more downtime than chase time. It sure helps being close to the action though.
Reactions: JamesCaruso, Paul Lemery, Drew Terril and 3 others

It's funny... my wife and I have started talking a bit about retirement as we're getting to the halfway point in our careers... it's never occurred to me to have a permanent "base" per-say in the Alley as my answer to that has always been a nice RV with my chase vehicle in-tow. If I want to spend an extended time chasing, I'll do it the fun way and allow me to be mobile. I'm LIVING in the Alley right now, and it's great for convenience, but as has been said, there is a lot more downtime and there is something to be said for living in a place you can enjoy in that time. Wichita is a fantastic city, so glad we managed to get here, but my retirement years will likely be in a sleepy part of the country that may not be considered a great "chase base".

I think the RV route is honestly my favorite idea... I love it because it allows us to travel and live on the road comfortably, but if I can tow a chase ride along and break off the RV and go run around after clouds, that's fantastic, too. But I'd want that RV to serve more purpose than to just get me to live in chase country, and the idea of your own mobile hotel that you can leave somewhere and travel by car just sounds fantastic to me.
Reactions: JamesCaruso, Todd Lemery, JL Gacke and 1 other person

Todd Lemery said:
View attachment 21066
If my only consideration was being where I could chase almost anything, my destination would be somewhere within the blue circle. Once everything else was considered, my wife and I will be moving to Bentonville Arkansas as soon as our last child is out of the nest. Officially in 1 1/2 years, but we are already looking at places to buy. We’ll be moving from the Upper Peninsula of Michigan, so even that will be a big improvement of my chase location.
It’s a blast chasing, but you have to have other interests and hobbies to get you through the year. Unless you’re Reed Timmer chasing everything including snowstorms, you’re gonna have way more downtime than chase time. It sure helps being close to the action though.
Click to expand...

Todd, you'll like NWA. My dad lives in Springdale, so I try to get up there when I can. It's a really nice area, a bit crowded in town, but very pretty. Lots of things to do in the off season, and you're still an hour-ish from both Tulsa and Joplin as well. I like the OKC area, but if I ever looked to go somewhere else, NWA would probably be in my top three, along with Northern Indiana and the Texas Hill Country.
Reactions: Todd Lemery

I used to fantasize about being able to live in the Alley, but not as much anymore. If I were retired, and had the financial wherewithal, I would be perfectly content to just take an extended annual chase vacation. Spend 4 to 6 weeks (depending how the season goes) on the Plains, staying in a short-term rental or just in different hotels each night (even living in the Alley, you would have to stay in a hotel more often than not on a chase day, after all what percentage of events would be within a tight enough radius to get out and back in the same day? Don’t forget, as a typical retiree you may not have the driving stamina you have today!)

As Todd and Tony said, there is way more downtime than chasing time. Even IF you could get 5 solid chase days *every* week throughout May and June, lets say 40 chases, and let’s (very) generously add another 20 days outside of peak season, and you’re talking about 60 days per year, less than one-sixth, or about 16% of the year. I can’t imagine a 16% opportunity prompting me to make too many selections in any other areas of life. Not to mention, the only real consideration should be the *incremental* chasing opportunities that I would have access to by living there year-round, beyond the 4-6 week extended chase vacation. So to continue using my example, I could hit all 40 days in May/June anyway just with an extended chase vacation, meaning the benefit of moving there permanently is only the incremental 20 days over the remaining 10 months - which is only about 7% of the remainder of the year.

There are areas of the Plains I love for many reasons beyond chasing, but once I’m focused on the many more NON-chasing days I would prefer to be near the coast, or in the mountains, or someplace warm like South Carolina, Florida, or, my real retirement dream, the Caribbean (which would hopefully include some hurricane chasing!)
Last edited: Jan 25, 2021
Reactions: Todd Lemery and JL Gacke

The great thing I'm seeing is that people all have their own versions of that perfect place or mode and I sincerely hope you all land in it.

I love finally being away from metropolitan areas and having my rural Home Base.
It doesn't cost a fortune to live here so my resources are available for doing other things, which is good because I've never had a fortune anyway.
I'm an easy drive away from Fort Collins, CO where my son lives (not to mention the mountains) and an easy drive away from my good friend in Ogallala. I've got 3 workshops in my home to build and sell musical instruments and sculptures. I'm working on a couple books, one somewhat loosely associated with stormy weather and the other dealing with early life out on the plains that are both essentially right out the back door.
As to “downtime”, I can pack up darn near anytime I feel and bop down to southern Utah or Glacier or Tetons or do research out on the Great Plains, so I must say I'm enjoying the heck out of my choice.
As mentioned in another thread as to camping while chasing, I'm planning on just staying out following the storm systems this season as often as I can and if Covid retreats.
Then refuel at Home Base and get back out – at least that's the plan.
Reactions: Todd Lemery

My wife and I just signed the papers for our new home in Bentonville Arkansas. We still have one more daughter to finish up her senior year next year before we think of moving there full time, but at least the search is over.
At only a couple of hours from Tulsa and about an hour to Joplin it’s a huge upgrade for me in chase locations and there’s tons to do year round. There’s still snow left here so the months long brutal winters can kiss my butt now!
Reactions: James Hilger, Robert S. Thompson, JL Gacke and 3 others

I went to one year of college in Siloam Springs back in the day. God the roads there were terrible. Good place to test 4x4 pickups for durability.
Reactions: Todd Lemery and James Hilger
You must log in or register to reply here.
Share:
Facebook Twitter Reddit Email Link
Top Bottom